One vote that occurred this election day did not pit Democrats and Republicans against one another in an effort to win seats or change policy. Instead, it was a widely bi-partisan effort, meant to show solidarity with a U.S. ally. In a vote under suspended rules (requiring 2/3 majority) the U.S. House of Representatives voted Tuesday in favor of a resolution that called on “the President and the Secretary of State to oppose unequivocally any endorsement or further consideration” of the UN-endorsed Goldstone Report which investigated whether violations of human rights law were committed by Israel and Hamas during the Israeli assault on Gaza a year ago.

Regardless of the merits of the report or the resolution, the 344-36 final vote with 22 voting present (30 not voting) signified widespread support in both parties for the House’s rejection of the document. 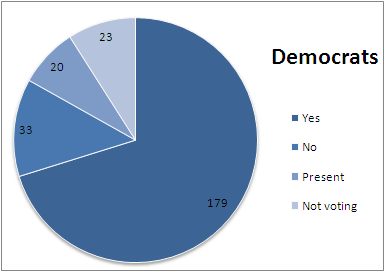 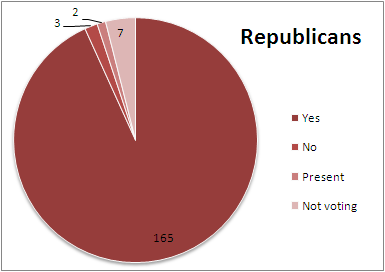 In the House Committee on Foreign Relations, from which the bill originated, there was an almost identical vote share in favor (on the final bill), though the “not voting” contingent was a higher percentage and included key members. Committee Vice-Chair Gary Ackerman, who is also the Chair of the Sub-committee on the Middle East affairs and Donald Payne, Chair of the Sub-committee on Africa and Global Health, both chose not to vote on the bill. On the Republican side of the committee, only Ron Paul voted against. 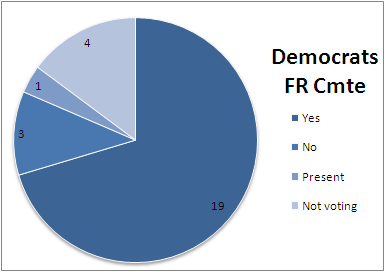 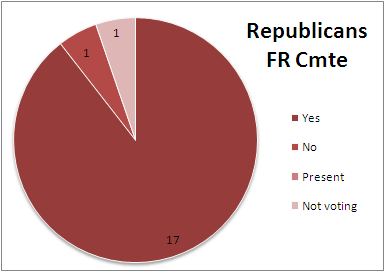 For all of its bluster and bi-partisanship, the non-binding resolution does not have a direct practical impact on either the consideration of the Goldstone report at the UN General Assembly or Security Council, or the Obama Administration’s overall strategy in Israel-Palestine. Indeed, like many other resolutions that express the “sense of the House,” the legal and policy implications are tenuous at best.

The role of the legislative branch in the development of foreign policy is constantly changing, based in part on the interest and timeliness of the Congress and in part of the relevance of Congress’ main tools to issues at hand. The political aspect plays a major role as well, with members of Congress eager to vote on resolutions that bolster their standing in their home districts, without bearing the brunt of responsibility for the impacts.

For making a serious impact, however, veteran congress-people identify a few key tools that the legislative branch has to adjust the foreign policy priorities and actions by the executive. The last two, treaties and appointment holds, are restricted to the Senate.

1. Power of the purse: On large scale initiatives, such as the wars in Afghanistan and Iraq, the use and deployment of weapons systems, troops or warships, Congress can delay, deny or put guidelines using appropriations measures. The most recent major example was a slew of amendments and bills with regard to the Iraq war, which was largely unsuccessful at actually changing US activities in the country. This strategy requires constant pressure on the President by Congress as well as strict spending guidelines, and therefore requires a great deal of political capital and commitment.

2. War powers: Congress has the power to “declare war,” and “call forth the militia,” though in modern practice, this authority is rather unclear. In conventional activities of the US military against another country, such as the 1991 Gulf War and the 2003 Invasion of Iraq, Congress’ purview of the main operation was clear. However, for many military activities of the US abroad, conventional war authorization is not particularly relevant. For example, after September 11th, Congress passed a resolution authorizing the ” Use of Military Force Against Terrorists,” which has been interpreted in quite broad terms.

3. Individual lobbying: Congress(wo)men and Senators, particularly those on the Foreign Relations committees, are able to travel around the globe and bring back to the President pet causes, whether localized (hunger in a rural developing country) or more broad (e.g. human rights violations against the Tibetans).

4. Senatorial holds on Presidential appointments: In the Senate, preventing executive appointments to sensitive positions, such as a senior staff to key departments or ambassadors abroad, can be used for leverage.

5. Senate’s treaty powers: The U.S. Constitution requires that all treaties be approved by the Senate by 2/3 majority before they become law. Ignoring that the legal question of what qualifies as a “treaty” has had a long and circuitous history, the fact is that many agreements negotiated with foreign governments include consultation with the Senate, whether an official vote is held or not.

Since the President often plays the dominant initiating role on most foreign policy issues, he or she therefore holds the majority of political responsibility (read: risk) for the success or failure of the initiatives. As the leading edge, the executive has to deal with the nuances of diplomacy and foreign engagement, while in the background, Congress can deal in more black and white absolutes that are more linked to politics than policy. For example, the debate over restricting funding for the Iraq war in the 110th Congress (2006-2007) was framed in terms of withdrawal or surge, with little gradation in between.

As a result, there is often little risk for Congress to pass aggressive yet myopic policy resolutions or amendments, even in cases where the impact on U.S. actions is real. But when the time comes for re-election, there is adequate ammunition for touting strong commitment to ideals, defense and allies.

In the case of the Goldstone report, it is possible that the actual contents of the report did not matter much to most voting members. Except for the relative few who are closely engaged on the Goldstone report itself, for example Minnesota Democrat Keith Ellison, the roll call was merely a “Pro-Israel or not” vote, supported by both the Democratic and Republican leadership as a point of bipartisan cooperation. In fact, apparently the initial mark-up of the bill had a number of factual errors in it, such as characterizing the Goldstone mission as investigating only the Israeli conduct in the operation rather than both Israel and Hamas, which were only corrected after the author wrote a letter to the bill’s sponsors.

Given that the House’s effort on this is largely symbolic, using none of the tools discussed above, it is clear that the resolution is largely rhetorical. But the question remains about what kind of action the current Congress would take if they were intent on solidly changing the Obama administration’s approach on something broader, such as the Iran negotiations or the Afghanistan conflict. Would they follow a similar path as was taken in 2006 and 2007, which failed to change the Bush administration’s conduct of the Iraq war? Or would a different track be taken, perhaps threatening to reduce or change the 2001 anti-terrorism war resolution or more informal techniques such as Senatorial blockage?

Nonetheless, with many incumbents looking vulnerable going into the 2010 midterms, it could be that Congress does not really want to engage in foreign policy making in the short term, instead focusing on the soft-edge political votes like the one from Tuesday. For a case like Afghanistan or Iran, there may be simply too much risk for little reward, particularly in a political environment where domestic issues continue to dominate.
—
Renard Sexton is FiveThirtyEight’s international columnist and is based in Geneva, Switzerland. He can be contacted at sexton538@gmail.com