On Saturday, Afghan voters will again head to the voting booth, this time to elect members to the Afghan National Assembly, known as the Wolesi Jirga. This election, the second in the history of the legislative body, was initially scheduled for late May. It was postponed, however, because of a lack of money, logistical challenges and the continuing violence in the country.

While Afghanistan’s widespread security concerns, particularly in the south and east, have dominated the election storyline –  the Independent Electoral Commission announced that at least 900 polling stations will not open on Election Day, representing about 13.2 percent of the 6,835 total stations – the nation’s unique electoral system will continue play an important role in the results of the election.

In particular, the Afghan constitution requires that at least 68 of the Wolesi Jirga’s members, about 27 percent, be women. And the Independent Electoral Commission has decided that under the nation’s Electoral Law, at least one member per province must be female.

Since Assembly members are allocated and elected by province, the female quota is actually applied at the provincial, rather than national level. There is also a nongeographic M.P. allocation of 10 for the Kuchi nomads, who are Pastun herders that migrate throughout the year.

The percent of female legislators per province mandated by the electoral commission therefore ranges from a low of 20 percent in five lower middle-sized provinces to a high of 50 percent in the three smallest Afghan provinces. The three largest provinces, Kabul, Hirat and Nangerhar, are closer to the desired proportion, with 27 percent, 29 percent and 29 percent respectively. 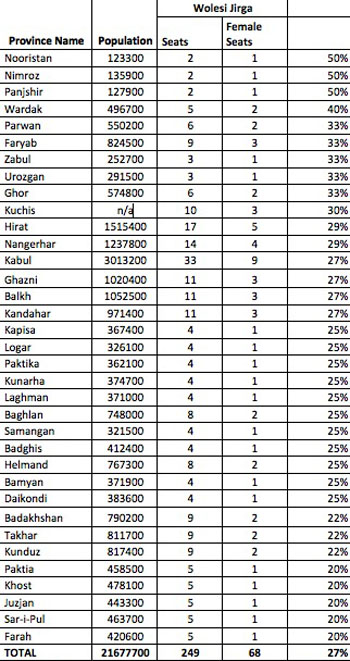 Within an electoral constituency, Afghanistan uses a “single nontransferable vote” system, an approach used by only a few other nations – Japan and South Korea once used the system, while the upper houses of Thailand and Indonesia continue to.

The single vote system gives each Afghan citizen one vote to use to select one candidate from the often dozens, if not hundreds of available candidates. For example, in Kabul, more than 650 people are contending for the capital province’s 33  slots. Once all the votes have been cast, the top 33 candidates will receive seats in parliament. As a result, in places where there are a handful of extremely well-known candidates and a large number of relatively unknown competitors, the difference between winning a seat and losing among the last few seats awarded may be just a few votes.

Here is where the female quota becomes particularly influential. In the previous assembly election in 2005, in Herat Province, the separation between Shahnaz Hemati (7,161 votes), and the next finishing candidate, Sardar Ishaqzai, (6,829 votes) was just 332 votes of the 474,541 valid votes cast – only .07 percentage points separating the two. The Independent Electoral Commission mandate requires that Herat elect five women among their 17 officials, meaning that several male candidates on the cusp of victory were skipped over to fill this quota. Indeed, between Ms. Hemati (who finished 14th) and the next elected minister, Saadat Fatahi (4,514 votes, finishing 33rd), were 18 male candidates. The final two winning candidates were elected with even lower vote totals, with Al-haj Rahima Jami receiving 4,105 vote (40th place) and Najla Dehqan Nizhad winning 3,580 votes (47th place.)

The top finishing candidate in Herat in 2005, Fauzia Gailani, was female, winning 16,885 votes, or 3.6 percent. Well covered by the international media for her victory, she became known as a champion of women’s rights in Afghanistan, particularly against child marriage, something she experienced at the age of 13.

Unfortunately, Ms. Gailani has also become a symbol of the struggle candidates face. In late August, five campaign workers for Ms. Gailani’s re-election in Herat were kidnapped by an armed group; the  Taliban later claimed responsibility.

Renard Sexton can be contacted at sexton538@gmail.com.