Six months into marijuana legalization, the Colorado Department of Revenue has issued a new report outlining findings about the size of the newly legal market. It turns out that the demand for marijuana far exceeds earlier estimates; according to the report, statewide demand is at a whopping 121.4 tons per year. That’s 31 percent higher than a previous Department of Revenue estimate and 89 percent higher than an oft-cited study by the Colorado Futures Center. And while the vast majority of the increase is the result of resident smokers consuming more than expected, the growth of the retail market — particularly among tourists — is a promising sign for the success of legalization.

Colorado makes substantially more money from taxes on recreational marijuana than medical marijuana. So the success of recreational legalization can be measured by the state’s ability to make loads of money from pot taxes. For advocates, Colorado (so far) appears to be a first victory and may become proof of concept. If Colorado is able to rake in a substantial amount of tax revenue, legalization advocates’ pitches to legislatures in Oregon, Massachusetts and Alaska become that much easier. And while most of the overall growth in the market size is due to residents — probably medical customers — being heavier smokers than anticipated, the report found that a substantial slice of the retail growth is due to tourism. Here’s a quote from the report (emphasis added):

Using the latest retail marijuana tax statistics from the Department of Revenue, we also found that conversions from medical to retail consumption is relatively low. Instead, retail supply of marijuana is growing, while medical marijuana is relatively constant. This may indicate that medical consumers would rather pay the medical registration fees as opposed to the higher tax rates, or that there are currently relatively few retail outlets compared to medical centers. Therefore, the retail demand is derived primarily from out-of-state visitors and from consumers who previously purchased from the Colorado black and gray markets.

Earlier this year, I looked at the pricing differences in the Colorado medical and retail markets, and why they could be a huge potential problem for revenue. This chart, from my original article, shows what I found: 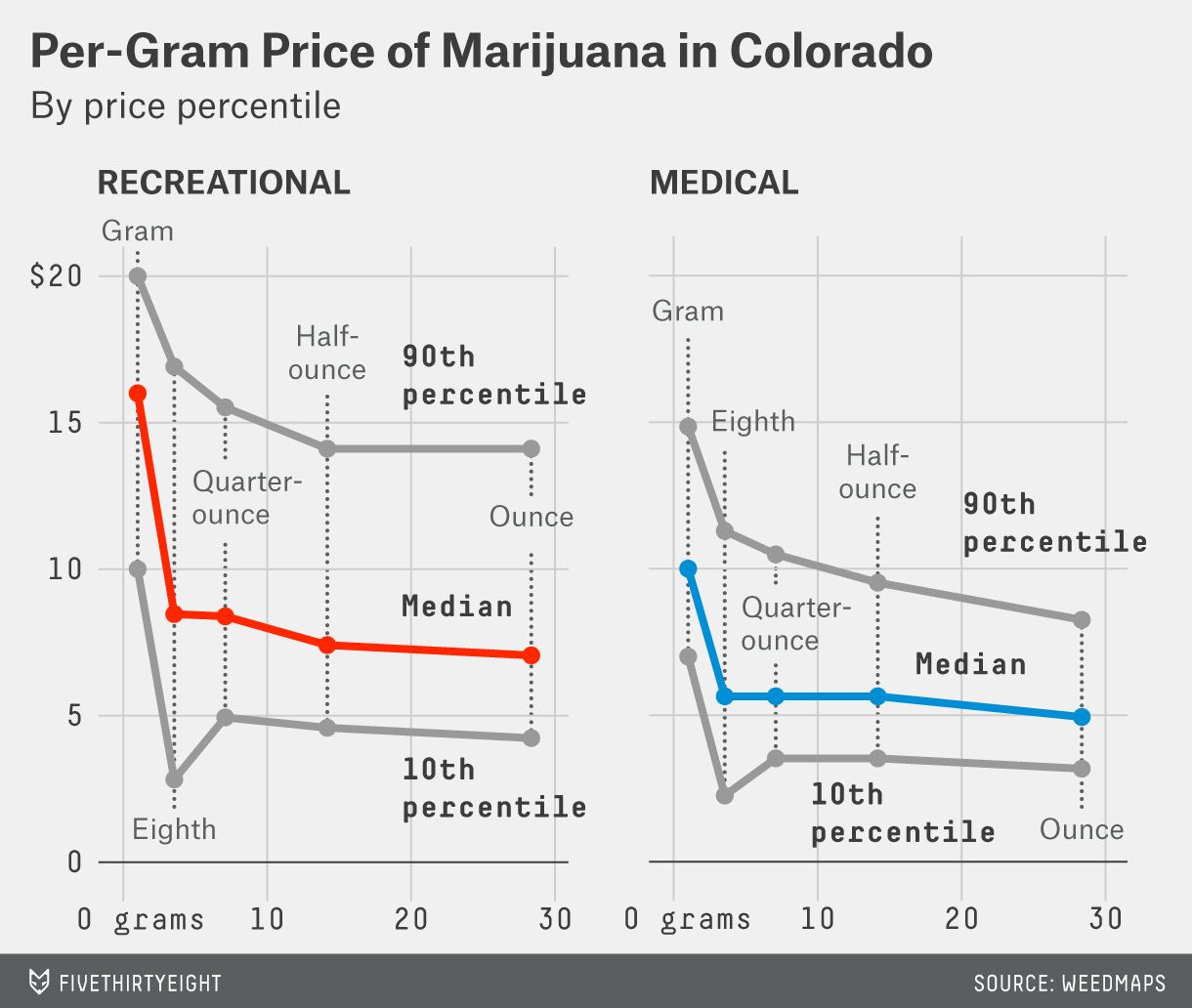 Recreational pot is a lot more expensive than medical pot across the market, and in that piece, I raised the question as to whether that price gap could be trouble for the success of legalization:

The state obviously still cares about collecting taxes, and architects of the marijuana legalization effort both in Colorado and nationally have a vested interest in demonstrating that legal cannabis can be a revenue-generator for states. Since it’s considered fairly easy for a healthy person to obtain a medical marijuana card, recreational prices pushing people back toward medical in the first four months of legal pot in Colorado may not be the best thing for the movement.

The bottom line: The report’s findings suggest the appeal of the Colorado medical market may not be a huge problem for legalization, as long as those tourists and previously black-market customers stick to retail and not medical.