Forget any notions of a party weekend in Bogotá. The Colombian authorities have put in place a 60 hour ban on the sale of alcohol for this election weekend, lasting from 6pm Friday to 6am Monday. A prohibition on major campaign activities, such as press interviews and ‘propaganda,’ during the week leading up to election day, and a ban on carrying weapons (except for security forces) round out the efforts of the government to ensure a peaceful election experience for the country.

Colombia goes to the polls today to elect the successor to outgoing President Alvaro Uribe, whose eight years in office saw dramatic improvements in safety and security across Colombia’s cities. In a pitched battle against the leftist FARC (Revolutionary Armed Forces of Colombia) insurgent group, known for their kidnappings and role in the narcotics trade, the Uribe government worked closely with the United States to kill FARC members and push their activities back into the countryside. The ostensible goal is to eventually destroy the group entirely.

With this in mind, the still popular Uribe invoked a Bloomberg-ian desire to “guide the country through a difficult period” and sought to amend Colombia’s constitution to allow for him to seek a third term in office. The Congress passed a resolution (85 in favour, 5 opposed) authorizing a referendum on the subject, but the Constitutional Court struck down the measure with a 7-2 vote, ruling that the legislation contained both technical irregularities and would contravene democratic rights contained in the Constitution.

Disappointed, Uribe accepted the decision of the court, clearing the way for his Defense Minister, Juan Manuel Santos to run for the conservative Social Party of National Unity (called Partido de la U).

Of course, Uribe had been attempting what even Bloomberg had not: a second revision of the Constitution to allow for additional terms. Until 2004, the Presidency of the Republic of Colombia was a post that permitted an incumbent just one term of office. However, Uribe’s supporters successfully amended the rules to allow him to run again in 2006, an election he won with 62 percent of the vote. As such, a second constitutional change was a request too costly even for a grateful public.

With Uribe’s policies generally popular, Juan Manuel Santos has taken the approach of only mild criticism of the outgoing President. As the Defense Minister responsible for many operations against the FARC, for example the 2008 trick raid that freed 15 hostages, Santos inherits the political capital, as well as the liabilities, of the last eight years.

While there is near unanimity of appreciation for the security improvements since 2002, the regime has also been quite heavily criticized for its heavy-handed approach. With extra pay and leave given as incentives to soldiers who bring additional FARC bodies to the military command, an estimated over 2,000 civilians were killed an turned in as FARC rebels killed-in-action.

Known as the “body count” system, hundreds and perhaps thousands of so-called “false positives” occurred, following the 2005 initiation of the incentives system, which was continued when Santos became Defense Minister in July 2006. The scandal broke in September 2008, leading to the resignation of several dozen military personnel, including 3 generals and the Army Chief of Staff — but not Santos.

As a result of these and other social and political downsides to the Uribe government’s aggressive approach to security affairs, what once seemed like an ironclad political position for Santos has become an extremely close election.

Just two months ago, the candidacy of former Bogotá mayor and math professor Antanas Mockus seemed destined for a solid third or fourth place finish — with Mockus lucky to pull 10 percent of the overall vote.

As the campaign moved into full swing in April, however, Mockus’ outsider approach, eccentric attitude and pragmatic centrist agenda has propelled him into strong contention for the Presidency. Mockus has taken the view that while security gains under Uribe have been important, an equally secure Colombia can be achieved that still respects social and political rights. With a focus on education and justice reform in addition to “corner[ing] and finish[ing]” the FARC, Mockus aims to stand up to the paramilitary groups in terms of legitimacy as well as with military force. His approach has been criticized on the right as weak on crime and security, a charge he has tried to fight with measured but strong rhetoric against the FARC.

Quite a number of observers and journalists are content in even calling Mockus the “front-runner” in the race, though the numbers point to a neck-and-neck finish in the first round of voting. If no candidate receives a majority — which at this point is the probable result — there will be a run-off second round on 20 June between the top two candidates.

Gallup’s polling from 10 days ago still puts Juan Manuel Santos on top with 37.5 percent of the vote to Antanas Mockus’ 35.4 percent. While this would give a nominal victory to Santos, he would be well short of a majority, leaving it wide open in the run-off.

Gallup polling thus far puts Mockus in command position in the event of a run-off, even as Santos pulls the most in the first round. This polling, however, does not account for politicking in the interim between first and second rounds, such as the possible alliance between Santos and fellow conservative Sanin. It could be that second round voters are already shaking out this way (Santos 19 May share in the run-off is just about the sum of Santos and Sanin in the first round), or that some Sanin voters are undecided between the two at this point. Supporters of the conservative-liberal (free market) German Vargas Lleras are more likely to split between the two major candidates.

Ipsos polling relays a slightly more detailed, and generally complementary storyline. The main difference between the data sets (both obtained from interviews with 1200 adults) is that the Gallup numbers show continued improvement for Mockus since March, whereas Ipsos indicates that Mockus peaked at the end of April, while Santos has regained ground since April, possibly from defecting Sanin voters. 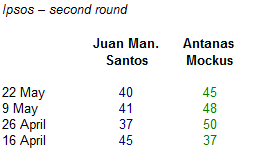 The second round numbers tell a similar tale, with Mockus’ lead falling slightly since its peak at the end of last month from 13 points during the week of 26 April to 5 points when Ipsos published its last numbers on 22 May.

One major downside to the Colombian law that prevents electioneering during the final week of the campaign is that no polling numbers have been collected or published since 22 May. As a result, we do not know whether Mockus has rebounded in the run-off numbers, or if Santos has further consolidated his position at the top of the first round.

Even further, it is possible, though quite unlikely, that one candidate or another has had a major influx of undecideds or minority candidate supporters such that they will win an outright majority. Without recent enough numbers, we have to conjecture based on qualitative reports, which indicate well-consolidated support for both Santos and Mockus.

As such, we can project that neither candidate is likely to break 40 percent of the national vote, and that a Santos v. Mockus run-off on 20 June is the probable outcome. The question will be whether Santos can pull together enough of the right and center-right to win in the run-off, or if 40 to 45 percent is the ceiling for his national support, one point both Gallup and Ipsos numbers agree upon.

As the only candidate to receive 50 percent or more in any published polling of the second round (the Centro Nacional de Consultoría put his highest run-off figure at 53 percent), Antanas Mockus seems to be in a relatively strong position going into today’s voting. But the race remains wide open and we eagerly tonight’s results.

UPDATE: Showing the weakness of these old polling numbers (which indeed have a urban lean to them), the actual results of the first round have come in at Santos 47 percent; Mockus 21 percent, Lleras 10 percent and Sanin 6 percent.