Last Sunday we previewed the Presidential race in Colombia, an election that was expected to be neck-and-neck until the bitter end. Establishment candidate and former Defense Minister Juan Manuel Santos was running to inherit the mixed political and security legacy of outgoing President Alvaro Uribe, while upstart former Bogotá mayor Antanas Mockus had surged into contention as a centrist alternative.

With polling from Gallup and Ipsos showing Santos pulling 35 to 38 percent and Mockus earning 30 to 35 percent, the results on Sunday evening were expected to show a tight finish. Regardless of who pulled off the win — though Santos was ahead by a few points throughout — it looked like both candidates would emerge in a strong position for the likely Presidential run-off.

However, with 99.7 percent of precincts reporting, Sunday night’s results presented a commanding victory for Santos, with the “Party of the U” standard-bearer earning 46.6 percent of the national votes. Mockus, running on the ticket of his new “Green Party” earned just 21.5 percent of the vote, less than half of Santos’ total. 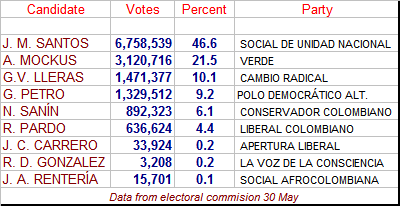 The Santos victory was even more impressive when viewed geographically. He won every department of Colombia save Putumayo in the south, where Mockus eked out a win with 28.9 percent to Gustavo Petro’s 26.7 percent and Santos’ 23.4 percent. 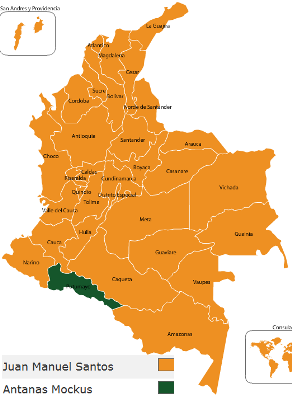 Even in Mockus’ political homestead of urban, cosmopolitan Bogotá (the ‘Athens of the Andes’), Santos won convincingly, with just over 40 percent of the vote to Mockus’ 27.5 percent.* 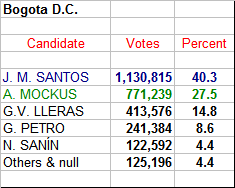 One interesting characteristic of the race, relative to other elections we have covered, was the lack of a serious socio-economic divide in vote shares among the top candidates.

Looking at the vote share per department, the vote shares of each major candidate explained by the percentage of people living in poverty is quite low. Broadly speaking, however, Santos received better results in poorer departments, while Mockus generally better in wealthier ones. 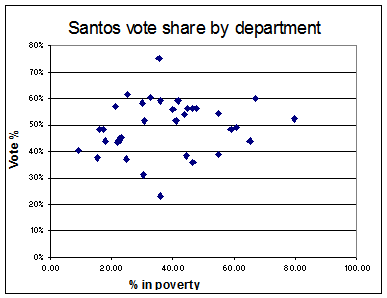 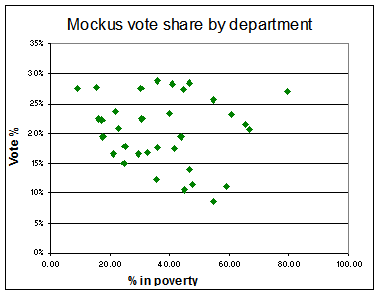 The key question going forward, as we look to the 20 June run-off between Santos and Mockus, is how much we can trust the polling that we have seen thus far, and whether the next batches will be any better. 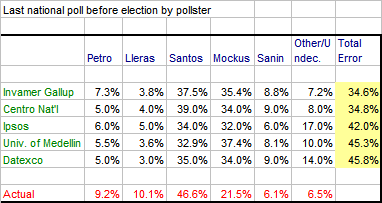 Before we jump into any condemnations of the pollsters — though these numbers are really horrible — we must give them a break on a key issue. The last poll was released on 22 May, by law the last day that election-related publications could be made, in order to comply with the national rules that ban campaign propaganda for the week before the election. The fieldwork was done from 17-19 May, meaning that the data were a full eleven days old by election day — an eternity in election time.

That said, we have to work with what we’ve got, and bad numbers are bad numbers.

Of the five pollsters that were published in major Colombian news outlets, the best performers were the local Gallup outfit, Ivamer, and the Centro National de Consultoría (the National Consulting Center). Based in Bogotá and focused on Colombia and a few other Latin American markets, CNC is a market research firm that also does political polling, much like most other polling outfits.

CNC is of interest because of the two best-scoring pollsters, they managed to capture the Santos rally where no other firm did. While Ipsos also captured a drop-off in Mockus’ support, they reported a drop for Santos at the same time. 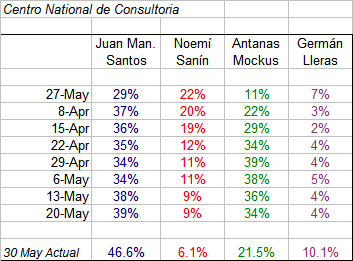 Overall, the hanging question regards the ‘surge’ of Mockus in April, a polling rally that peaked several weeks before the election, and resulted in a quite disappointing (for supporters) final result — a situation that was eerily reminiscent of the Liberal Democrats peak and crash in the UK. Even with some additional erosion of Mockus’ numbers in the days before the election, dropping from around 35 percent to just 21.5 percent in less than 10 days (with no scandal) is highly unlikely.

Plausible explanations for the overstated Mockus numbers are many, ranging from an overreliance on city-residing respondents (easier to get to) to selection bias towards wealthier respondents, poorer than expected turnout among the young, and the old chestnut of the incumbent party cooking the results in favor of their candidate.

Of course, this suggests that the previous figures showing a 5 to 10 point lead for Mockus in run-off are highly questionable at this point. Ostensibly building from a 47 percent baseline, and likely pulling nearly all of Noemi Sanin’s voters and many of German Lleras, it is Santos that now looks to be in the stronger position.

We can use the basic ideology of each candidate to allocate his/her votes to Santos and Mockus for the second round.

This allocation would result in a major second round victory for Santos, by nearly 20 points. 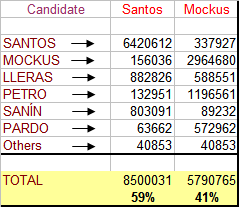 All told, it looks pretty bad for Mockus. His main path to victory at this point is to swing back a big number of Santos voters, while minimizing losses to Santos from the conservative candidates by perhaps their staying home rather than switching to Santos — a long shot at this point.

* Here is a chart of the Santos-Mockus results in each of the 32 departments of Colombia, ordered by Santos margin of victory (other candidates are removed to make it less confusing). You’ll want to click on this chart to see the details.