Kyler Murray’s lone college season as a starting quarterback was, in a word, overwhelming. Here was a would-be professional baseball player operating at warp speed, casually wrecking defensive coverages and sending opposing fans into Surrender Cobra mode before the fourth quarter had even started. There has perhaps never been a QB more preternaturally gifted at making everyone around him seem slow. Murray scored 54 total touchdowns, compiled the highest Total QBR recorded1 and led the Oklahoma Sooners to a conference championship and a berth in the College Football Playoff. In the words of his coach, Lincoln Riley, the Heisman winner was responsible for “the greatest single season in the history of college football.”

Maybe Murray would have made history even if he were running, say, the wishbone at a military academy. But he operated within Riley’s Air Raid-hued scheme, which seems to annually hatch the most devastating offense in the modern era. He spearheaded a souped-up offense adept at creating space and leveraging a passing attack to score a ridiculous number of points.

Murray has since moved on to the NFL, but one of the Sooners’ fundamental concepts, the play-action pass, continues to saturate the sport. Since Riley was elevated to head coach in 2017, no team from a Power Five conference has relied more on play-action (37.6 percent of team dropbacks). Moreover, no program has gained more yards (5,445) or scored more touchdowns (59) when running it.

Pro offensive coordinators often draw creativity from their college counterparts, so it should come as no surprise that nearly the entire NFL lined up last year to pick Riley’s brain. My colleague Josh Hermsmeyer has written extensively about the impact of play-action in the NFL. But in terms of volume, the college game is even more reliant on fake handoffs. 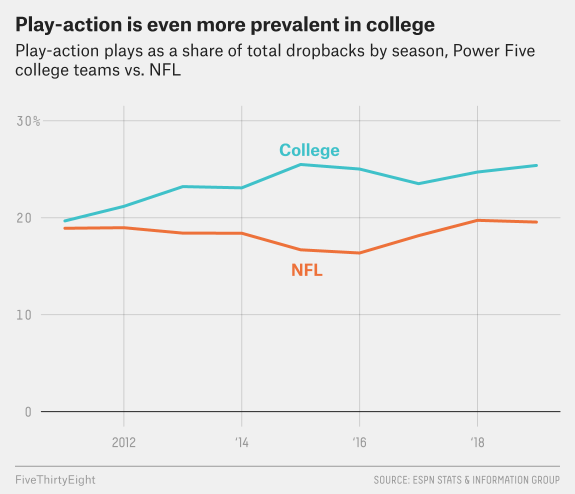 At its root, play-action is a con. It forces an opponent to honor the threat of choice and lures defenders out of position.2 By forcing pass rushers to respect a potential designed run — and drawing linebackers toward the line of scrimmage while ceding the middle of the field — QBs are handed enormous passing lanes through which to dissect a defense.

As college football’s regular season marches into its second month, more than one-quarter of dropbacks at the Power Five level have involved play-action. That’s the second-highest mark since at least 2011, and if maintained it will represent a second consecutive season of increased play-action frequency. Fifteen teams are using play-action on at least 35 percent of dropbacks, with Florida State, Louisville, Kansas State and Florida eclipsing 40 percent.

The reason for the increase in volume is clear: Play-action is extremely effective.

“If you’re not a tight end-fullback running team, you’re in a spread, you’re trying to play-action pass and trying to flow it down the field,” Oklahoma State head coach Mike Gundy said at Big 12 Media Days this summer.

Over each of the past eight years, through the fourth game of the season, the average Power Five quarterback’s play-action QBR has been considerably higher than his Total QBR in each season. In 2019, there’s a gap of more than 10 points. 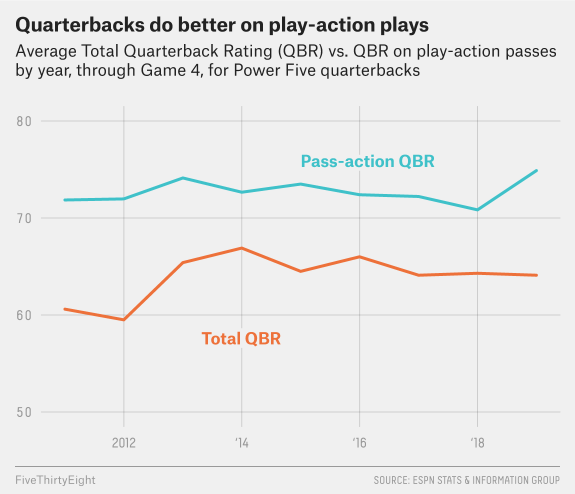 And because of those available passing lanes, quarterbacks are frequently given the green light to attack the second level of a defense. A quarterback’s air yards per attempt3 jump 50 percent, from 8.8 without to 13.1 with play-action.

Those throws are typically right on the money, too. Power Five quarterbacks posted a higher adjusted completion percentage in each of the past eight seasons when play-action was called versus any other play type that involved a throw, a nearly 2-point improvement (66.5 to 68.2 percent).

The call also seldom comes at the expense of turnovers. The average Power Five QB sees the same number of interceptions thrown per pass attempt with or without faking a handoff prior to the throw (2.9 percent). And as Hermsmeyer and Ben Baldwin have reported, an offense doesn’t even require a potent rushing attack for play-action to prove fruitful.

Not only is play-action volume up, but so too is its value. The average Power Five team is producing 3.2 expected points added via play-action, a 33 percent increase since 2011. Alabama, Iowa State and Oklahoma are each scoring more than 15 points per contest via play-action this season, figures that, if maintained, would all break the single-season record for the metric.

It seems that demonstrating an ability to successfully run a play-action-influenced offense increasingly leads to professional opportunities. Of the quarterbacks who posted the 10 best individual seasons since 2011 (in terms of play-action touchdowns accounted for), five are currently starting in the NFL.4

Oklahoma’s 2018 highlight reel is a supercut of Murray eviscerating the opposition on play-action, and that system continues to flourish in 2019. The value of the running back depreciates by the snap as bell cows increasingly are seen for what they are: a distraction from the main entree. Running play-action alone doesn’t guarantee success,5 but in an era defined by scoring, the option to turn to one of the most effective means of procuring points would seem an obvious one. College coaches have taken note.

After the rather sizable ripple effects of Georgia’s win over Notre Dame in Week 4 — UGA saw its playoff probability rise from 27 percent to 35 percent, while the Irish’s odds dropped from 25 percent to 12 percent — or even the aftermath of Wisconsin-Michigan, Week 5 is less consequential. The most important game of the week, according to how it changes every team’s playoff odds, is Penn State vs. Maryland on Friday night. The Nittany Lions aren’t an especially heavy hitter in the playoff probabilities, ranking ninth at 11 percent, but they could receive a multi-point swing in odds depending on what happens, while Ohio State and Alabama will see marginal changes. In a week when there are only two matchups between Top 25 teams (including No. 18 Virginia at No. 10 Notre Dame, for which our model doesn’t give UVA much of a chance at the upset), it’s the best we can get.