Where Willie Taggart goes, so goes history. The 43-year-old — whose parents worked in migrant fields — landed head-coaching gigs at Oregon and Florida State, two of the most coveted jobs in college football, at a relatively young age. At each of his four stops as a head coach,1 Taggart was the first African American to hold the position on a noninterim basis.

Taggart was fired Nov. 3 after a mostly disastrous 21-game stint as the Seminoles’ coach — which resulted in the second-largest buyout ever paid out. Though Florida State was applauded in 2017 when it hired Taggart — becoming the first university since Stanford in 2012 to employ an African American athletic director, head basketball coach and head football coach — the odds were never high that Taggart would be replaced by another black man, given historical precedence.2

“Black coaches in college football do not get any measure of patience,” ESPN’s Bomani Jones said after Taggart’s firing. “When it’s time to fire the black coach, when it starts looking shaky, people typically don’t waste much time before they do it.”

“Sports is a reflection of our society,” Arizona State head coach Herm Edwards said. “When you see men of color that become coaches, assistant coaches, quarterbacks, it becomes normal. Are we still a little bit behind the times, as far as the practices of hiring and opportunity? Yeah.” 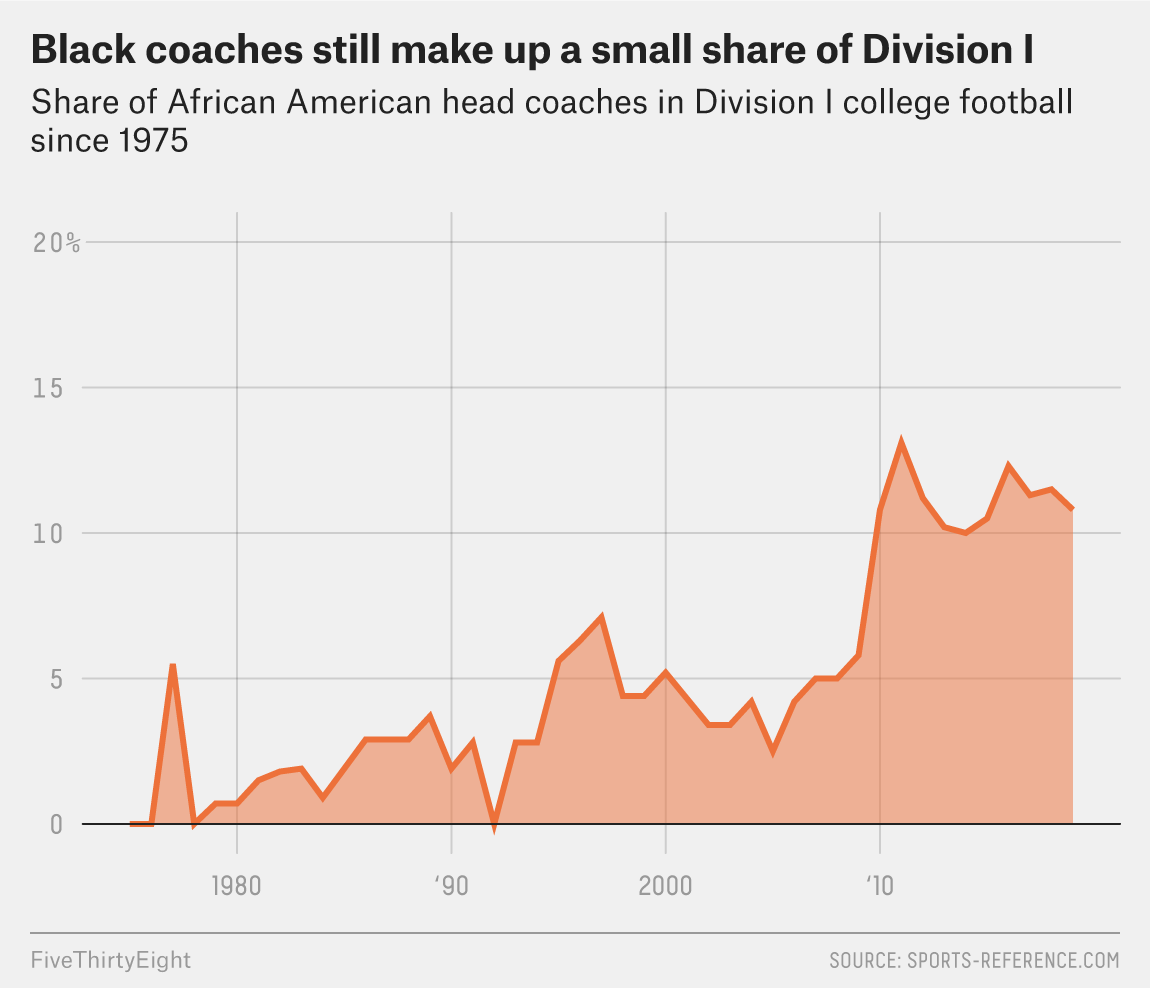 Since 1975, I could find only seven instances of an African American head coach being fired and receiving a second opportunity as a head coach.6

“I was never given a reason why I was fired,” former Colorado head coach Jon Embree said in 2012. “My answer is and will always be, we don’t get second chances.”

For as long as there have been college athletics, there has been a lack of minority representation in positions of power. Until this year, there hadn’t been a nonwhite Power Five commissioner,12 and the 2018 Institute for Diversity and Ethics in Sport’s (TIDES) College Sport Racial and Gender Report Card found that 85.4 percent of FBS university presidents are white. More than 90 percent of all football head-coaching positions during the 2017-18 season were held by white men. “College sport continues to have some of the lowest grades for racial hiring practices and gender hiring practices among all of the college and professional sports covered by the respective Racial and Gender Report Cards,” wrote Richard Lapchick, Director of TIDES. 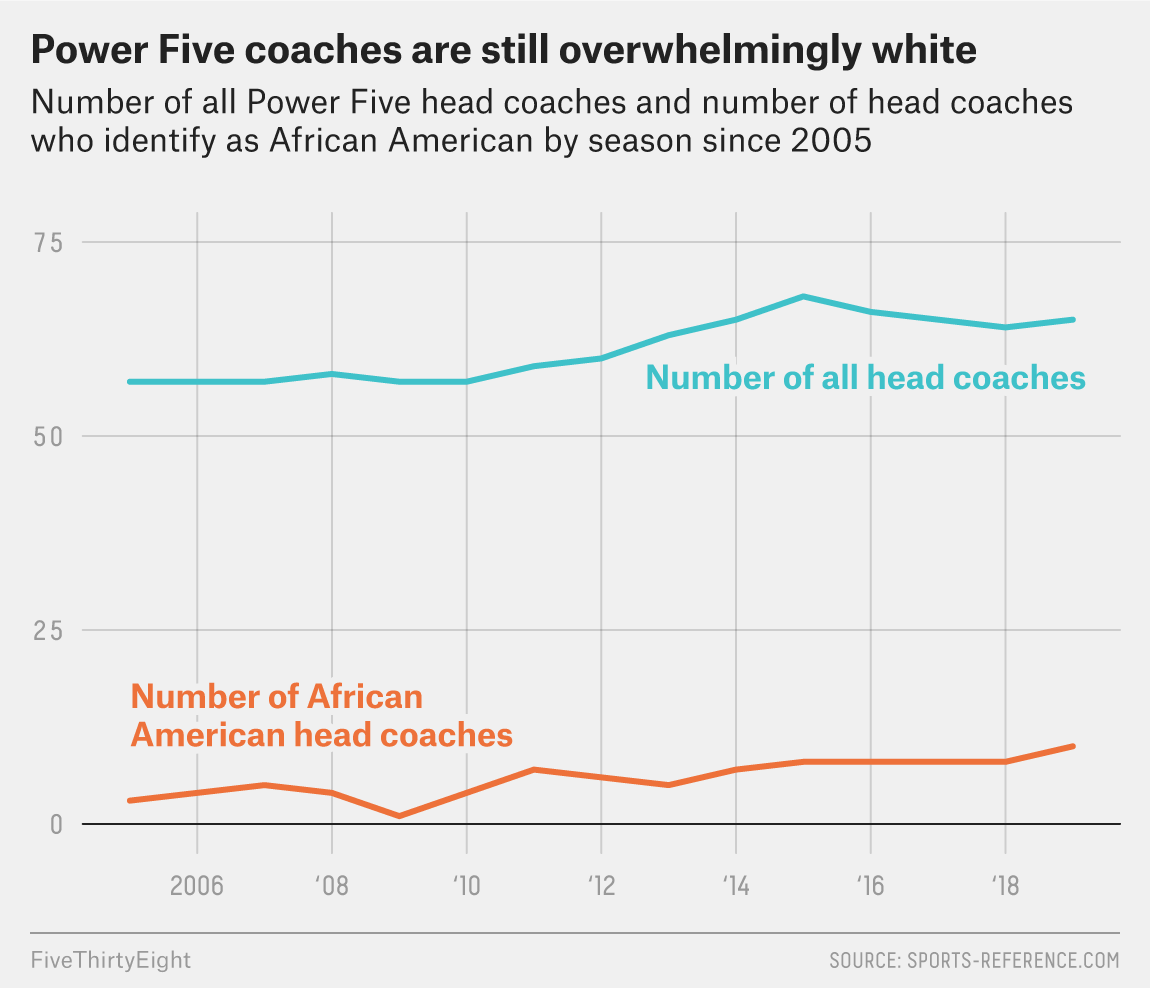 The 2019 FBS season began with 14 African American head coaches. Northern Illinois head coach Thomas Hammock is one of the newest. He told me this offseason that a number of assistant coaches across the country reached out to him after he was named the first black head coach in program history. “Obviously it’s a great responsibility,” he said. “I want to make sure guys behind me have the same opportunity, so I need to maximize my opportunity and win a bunch of games.”

Ascending to the title of head coach in sports is often equated with climbing a ladder. For black men in Division I college football, it seems that a more appropriate analogy would be hiking up a mountain wearing scuba gear. Not only is the current landscape awash in systemic barriers that often render equal hiring practices impossible, there’s a considerable disparity in job security once those positions are obtained. And for African American men, should that first opportunity fall through, there’s a very low likelihood of receiving a second.

Stanford head coach David Shaw told me this offseason, “Being a head coach in major college football right now, there’s so much that isn’t X’s and O’s, that isn’t recruiting.” This much, we know.