Coleman’s lead over Franken is now 136 votes after two days and 46% of the ballots recounted. 30% of votes have been recounted in heavily Democratic Ramsey County, 36% in Democratic St. Louis County, and 42% in Democratic Hennepin County. 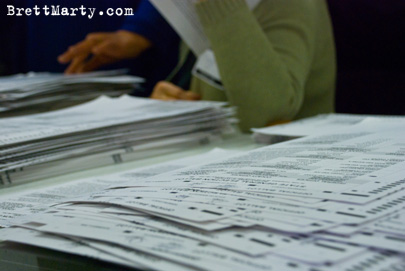 Dakota County, which went for Coleman decisively, has produced a net gain of 32 for Franken. Coleman has lost 40 votes to Franken’s 8, so perhaps this is where Franken challenges have stepped up.

Without seeing all the challenged ballots, it’s unclear where the challenge phase will take us, or what the final tally of challenges will be. Obviously there is an important perception problem in terms of who has the lead after the recount.

Per the Minneapolis Star-Tribune, both camps seem pleased with the state of the recount, which should indicate just how little certainty either side has about the ultimate outcome. We’ll update tomorrow.