Now that the endless recount battle between Al Franken and Norm Coleman for Minnesota’s senate seat is over, Coleman is a private citizen. He’s also, of course, eligible to run for governor next year. Might he? 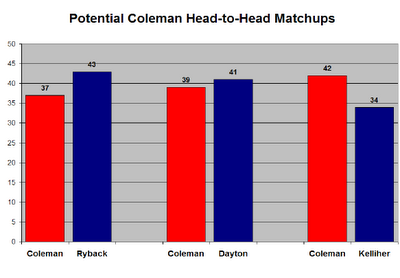 Minnesota-based blogger Joe Bodell reports results from a new Public Policy Polling survey of Minnesotans that shows Coleman competitive against potential Democratic-Farmer-Labor gubernatorial nominees. He’s trailing but within the margin of error in potential matchups against Minneapolis Mayor R.T. Rybak and former senator Mark Dayton, and leading beyond the margin of error against House Speaker Margaret Anderson Kelliher. But, given Coleman’s name recognition, Bodell thinks the results ought to discourage Coleman from running.

Via email, Bodell told me: “This poll contains some really bad news for Norm Coleman. Universal name-recognition can be a blessing, but when a legal process gets stretched out as tortuously as the recount and court challenge did, Minnesotans start getting tired of the players really quickly — especially those seen to be obstructing the People’s business. Could Coleman overcome the bad taste left by his obstruction of Sen. Franken’s seating? Probably. Eighteen months is a lifetime in politics. But losing to two of the three leading DFL candidates, including one who isn’t yet tremendously well-known in Greater Minnesota, is a really bad sign for his chances at a political resurrection.”

Indeed, according to PPP, 52 percent view Coleman negatively, just 38 percent positively. Moreover, 54 percent say the way Coleman handled the recount against Franken makes them less likely to vote for him in the future, more than twice the 26 percent who say it makes them more likely to do so.

For the record, although Minnesota has no constitutional term-limit provision for governor, Republican Tim Pawlenty has already announced he will not seek a third term. Coleman is out of work now, and he’s not exactly an unknown in the state. Though he has to deal with those negatives, he might be Minnesota Republicans’ best chance–if, that is, he’s willing to risk the possibility of another close, or even not-so-close, but painful defeat.