We’ll update these numbers “officially” with the Secretary of State’s data dump at 8 PM, but based on intraday numbers compiled by the Star Tribune (as of 4:42 PM local time), Norm Coleman’s rate of challenges continues to skyrocket while Al Franken’s — though much higher than it had been on the first couple days of the recount process — has leveled off some. 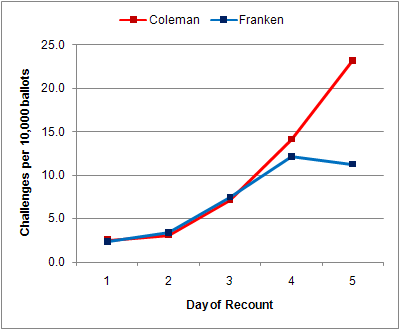 Coleman’s rate of challenges thus far today is approximately 23.4 for every 10,000 ballots cast. On Wednesday, the first day of the recount, Coleman’s rate of challenges was 2.5 per 10,000 ballots. So for some reason, the Coleman campaign is finding reason to challenge more than nine times as many ballots as it did on Wednesday (and the Franken campaign, for its part, is finding reason to challenge about five times as many ballots).

Now, the Coleman campaign isn’t being devious or anything like that; they’re simply exploiting a flawed system and trying to win a spin war. But news organizations should recognize that — as of about Friday afternoon when the number of challenges skyrocketed — the entire first phase of the recount process essentially became a spin war. The running totals being reported by the Star Tribune and the Secretary of State are at this point fairly meaningless, and should be denoted as such; we aren’t likely to learn very much more about the ultimate winner of the recount until the state canvassing board convenes in December.