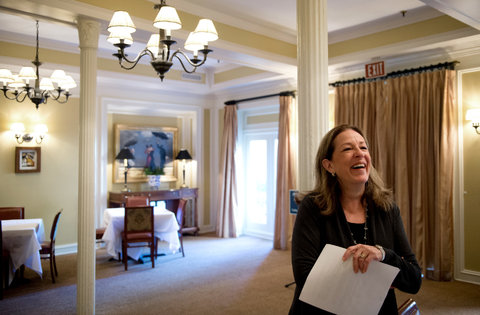 South Carolina’s first district has been held by a Republican for over three decades, and Mitt Romney carried the district by 18 percentage points in 2012. But Mr. Sanford’s personal baggage — his 2009 excursion in Argentina with a woman who was not his wife, and a recent accusation of trespassing at his former wife’s home — is helping make the race competitive.

Still, even if Ms. Colbert Busch does win on Tuesday, how long might she be able to hold on to such a solidly Republican seat?

If recent history is any guide, not that long.

Since 1997 (which is as far back as records of special elections go on history.house.gov), candidates who won a special election in a district carried by the opposing political party in the preceding presidential election have had fleeting tenures in Congress.

There have been 59 special elections since 1997, and just 13 candidates have carried districts that leaned away from their political party (a Republican representing a Democratic-leaning seat or vice versa). Of those 13, 12 no longer hold those seats.1 The lone exception is Representative Ron Barber, who won a full term in Arizona’s Eighth Congressional District in 2012 after winning a special election to replace former Representative Gabrielle Giffords.

Most of those 13 special election upsets occurred in districts that are less partisan than South Carolina’s first district. The following chart shows every special election since 1997, arranged by each district’s partisanship as measured by the preceding presidential vote.

Nine of the 13 upsets occurred in districts with a lean of less than 15 percentage points. The partisan makeup of South Carolina’s First Congressional District — an 18 percentage point advantage for the G.O.P. in 2012 — would make a Colbert Busch victory one of the biggest special election upsets in recent history, but not quite in the top tier. Four candidates have won special elections since 1997 while overcoming more severe partisan headwinds.2

But no matter the magnitude of the partisan lean, representatives who have won special elections in districts that leaned toward the opposite political party — even if the lean was slight — have had trouble winning re-election.

Here are the 13 special election upsets since 1997, and whether that candidate won the following two elections: 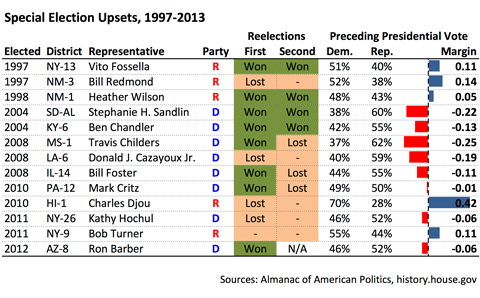 In contrast, the average tenure for all House members has been roughly five terms, or 10 years, in recent Congresses. Incumbent members of Congress are re-elected, when they run, the vast majority of the time.

The fact that special election winners who carry districts that tilt toward the opposing party have shorter tenures in Congress shouldn’t be surprising. Special elections often occur under special circumstances, like after a scandal, death and or resignation. Those circumstances often fade.

In addition, House elections have become increasingly nationalized, and ticket-splitting (voting Republican for the House but Democratic for president, or vice versa) has decreased sharply.

Ms. Colbert Busch may be able to beat the odds. Others have, including former Representatives Ben Chandler of Kentucky and Vito Fossella of New York, both of whom earned several terms.

Of course, in order to have that chance, Ms. Colbert Busch will first have to defeat Mr. Sanford, which by itself would be one of the bigger special-election upsets in many years.

1: Representative Bill Foster won a special election in the Illinois 14th Congressional district in early 2008, won a full term that November, lost re-election in 2010, then returned to Congress representing the state’s 11th district in 2012.

2: That includes former Representative Charles Djou, a Republican, who won a 2010 special election in Hawaii’s First Congressional Cistrict, which President Obama carried by 42 percentage points in 2008.

An earlier version of this post misstated the political affiliation of former Representative Ed Case of Hawaii. Mr. Case, who represented Hawaii’s Second Congressional district, was a Democrat, not a Republican. Because of that error, the post contained several incorrect numbers about special elections in which a candidate won in a district that was carried by the opposing political party in the last presidential election. Those figures have been updated.