Even 38-0 teams can go through mistimed offensive slumps, and the Kentucky Wildcats went through one at a very bad time Saturday night. Kentucky went more than 5 minutes without scoring in its loss to Wisconsin on Saturday. Between Karl-Anthony Towns’ jumper with 6:37 to go in the second half, and Aaron Harrison’s layup with 56 seconds remaining, Kentucky was stuck on 60 points, while Wisconsin swung from being 4 points behind to 4 points ahead.

A lot of credit must go to Wisconsin’s stout defense, which looked a lot better than its Pomeroy rating (just 55th best in the country). But the Wildcats didn’t help themselves Saturday night with three shot clock violations down the stretch. Those violations were symptomatic of a larger problem: Kentucky’s torpid pace down the stretch helped doom them.

This will involve more math than the usual “hot take,” so hang tight while we take a tour of probabilities. We’re most interested in one big question: Did Kentucky increase its chance to win by slowing its pace, thereby giving each team fewer possessions?

At first blush, it seems like Kentucky was better off slowing the game down.

The Las Vegas point spread and over-under line projected a final score of roughly Kentucky 67, Wisconsin 62 before the game. (FiveThirtyEight’s model had a similar projection, favoring Kentucky by 4.5 points.) In a game of 60 possessions per team, that translates into 1.12 points per possession for Kentucky and 1.04 per possession for Wisconsin.

So at a first glance, slowing the game down seems like a good idea for Kentucky — they were ahead, after all.

But there are reasons not to do it. Kentucky is the slightly better team — or at least that’s what Vegas and the FiveThirtyEight model thought before the game — and in the abstract the better team should want to play a longer game (a game with more possessions). Under our assumptions, if Kentucky and Wisconsin played an infinitely long game, Kentucky would always win. So it was slightly unusual for Kentucky, a Goliath of a basketball team, to adopt a “David strategy” instead.

This alone wasn’t enough to make Calpari’s strategy a poor one, however. Even though Wisconsin was the underdog, the difference was small enough that you’d still rather give them fewer chances to catch up, according to the simulations.

But Kentucky also almost certainly made its offense less efficient by slowing the pace down. Rather than looking for good shooting opportunities in the first half of the shot clock, it tried to rush shots near the end of possessions. (Wisconsin’s defense, to reiterate, had something to do with that. But Kentucky hadn’t had much trouble finding shots earlier in the game, shooting 60 percent in the first half.)

Exactly how much less efficient is hard to say, but efficiency declines significantly as the shot clock runs down to zero. NBA teams score about 1.12 points per possession when they shoot in the first 10 seconds of the league’s 24-second shot clock, but that efficiency declines to 0.92 points per possession in the final four seconds of a possession. These numbers aren’t perfect for any number of reasons — not least because they’re drawn from the NBA rather than college hoops — but they give us at least some sense for the magnitude of the effect.

So that got me wondering how much Kentucky’s offensive efficiency would have to decline to render Calipari’s strategy counterproductive. The answer: Not much at all.

In the table below, I’ve used the simulation model to estimate Kentucky’s chances of winning with reduced offensive efficiency. For example, a 10 percent reduction in offensive efficiency — meaning that the Wildcats are scoring at a rate of about 1.01 points per possession instead of 1.12 — would reduce their win probability to 76.8 percent in a game with 10 more possessions per team. That’s considerably worse than the 81.9 percent chance they had by playing regular basketball, but permitting 12 possessions per team. Even a 3 percent reduction in offensive efficiency would reduce Kentucky’s winning chances. 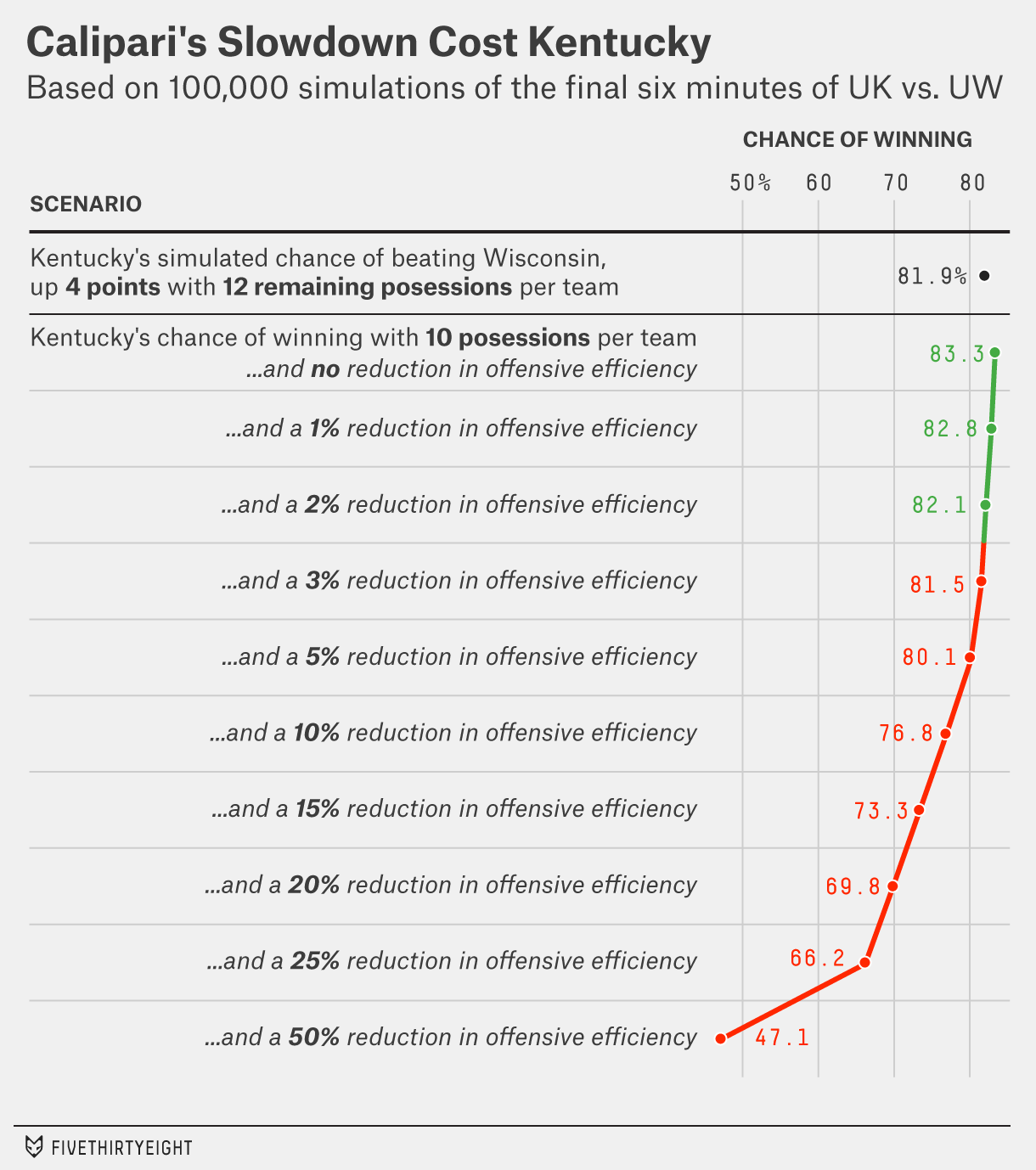 There are a lot of other factors to consider in the real world, of course, like how Wisconsin might have altered its strategy in response to Kentucky. Still, Kentucky seemed to be playing into Wisconsin’s hands, especially given that the Badgers are terrific in half-court sets — but much worse than Kentucky in transition — and ordinarily prefer to play at one of the slowest paces in college basketball. Wisconsin might have found a way to win anyway — they’re a terrific team, and the game wasn’t all that much of an upset. But Coach Cal made their path to the National Championship a little easier.

Podcast from Indy: The Kentucky Loss and Monday Night’s Matchup