“Barack has chosen Senator Joe Biden to be our VP nominee. Watch the first Obama-Biden rally live at 3pm ET on www.BarackObama.com. Spread the word!”

____
So much for a head-fake. The writing had been on the wall for a couple of days now.

It’s a good choice. The media will love Joe Biden. He passes the ready-on-day-one-test. Older voters like him, which means that Pennsylvania probably isn’t a swing state anymore, but that Florida might be. 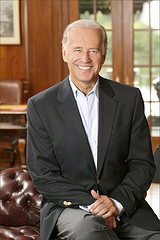 Was he the best choice? I guess we’ll never know. From among the five or so candidates who seemed plausible in the endgame, I think Hillary gives you the best chance of occupying the White House in 2009. But maybe she doesn’t give you the best chance of governing effectively, maintaining a majority in the Congress in 2011, or getting re-elected in 2013. Maybe the Obama campaign had some oppo on her, and that’s why she (allegedly) wasn’t vetted. But I would hope that Chicago at least took her seriously.

Tim Kaine? Never quite understood what made him Veep material, but he’ll be an effective surrogate for Obama and certainly raised his national profile. The fact that the Obama campaign may have made a late push to get Mark Warner into the game was a tip-off that he wasn’t likely to be picked.

Kathleen Sebelius? I found her a persuasive choice personally. I have no idea how she’d have gone over to the other 304 million Americans. She would have required a careful and deliberate roll-out process, and with the choice apparently having been made fairly late in the day, that had probably become impossible.

Was Brain Schweitzer considered seriously? Was Wesley Clark? Bill Richardson? Were they interested in the position? Were they vetted and disqualified? We have no way to know, so we’ll just have to take a pass.

At the end of the day, Joe Biden is that one choice that is in fact fairly safe but nevertheless feels fairly bold. I’d expect Democrats to wake up tomorrow morning feeling pretty good about him.