Inflation is a very important issue because high inflation would force the Fed’s hand with monetary policy (forcing them to raise rates) whereas low inflation allows the Fed to keep interest rates low for an extended period of time. Please click on all charts to get a larger chart.

First, let’s start with a definition of inflation. This is from my econ text in college — the 12th edition of Paul Samuelson’s Economics Text on page 226:

A little inflation is healthy because it indicates there is sufficient demand or cost push to increase prices. For example, if there are enough people who want a television, retailers can increase the TV’s cost knowing someone will buy the item at a higher price. Think of this like a trading pit on the NYSE.

Deflation, on the other hand, is perhaps one of the scariest developments an economy can face, largely because of the impact of a deflationary spiral. This starts when people really slow down their purchases of everything. This leads retailers to drop their costs to attract shoppers. But lower sales and lower prices means lower profits for retailers and manufacturers which leads to increased lay-offs. Higher unemployment leads to lower consumer spending and the cycle continues.

Fuel Imports: Import fuel prices countered an upward trend in February, falling 1.9 percent following a 4.9 percent rise in January. A 2.2 percent decline in petroleum prices was slightly offset by a 2.6 percent increase in natural gas prices. Over the past year, the price index for petroleum increased 81.3 percent and natural gas prices rose 16.3 percent, driving overall fuel prices up 70.8 percent for the same period. The 12-month increase in fuel prices followed a 49.8 percent drop for the February 2008-09 period.

Take a look at this chart of USO – the ETF for oil prices: 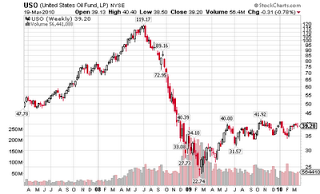 Note that a year ago prices were at extremely depressed levels which explains the 81% increase in fuel prices.

Here is a chart of the import price data: 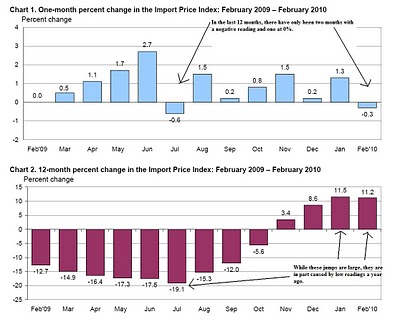 These numbers are well-contained and don’t point to any inflationary possibility. The year over year numbers are influenced more by the low readings last year.

Let’s deal with the producer prices data by looking at the stages of production. The reason why is producer prices are best thought of as a time series. If prices increase at the beginning of production (crude goods) they typically work their way through to the end of production at some point. But it’s also incredibly important to remember there is a tremendous amount of price arbitrage with production — meaning, the price difference between inputs and outputs can be very large, giving manufacturers a fair amount of flexibility. Let’s start with crude goods: 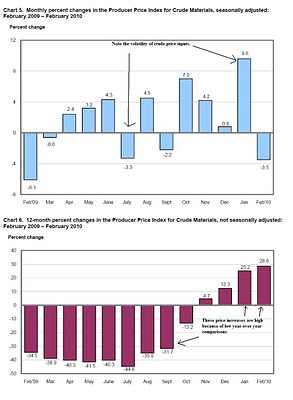 Note the fairly high rate of volatility in these numbers. The crude numbers increase at higher rates one month and then barely increase the next month. This is the result of fairly volatile commodity prices as seen in this chart of the DBC — the ETF for the overall commodity price index: 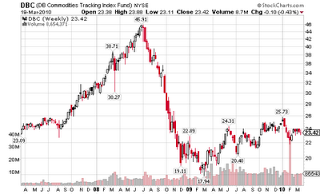 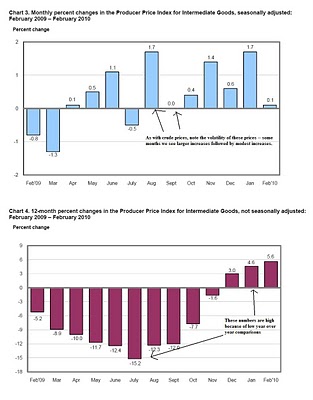 Note the volatility with intermediate prices as well. This volatility is good as it allows manufacturers to “catch their breath” from a price increase. For example, suppose input prices at the crude production level increase .5% in January. Manufacturers will have to perform calculations to figure out how to deal with these price increases. But if prices only increase .1% in February, then they have an additional month to factor in the January increase. 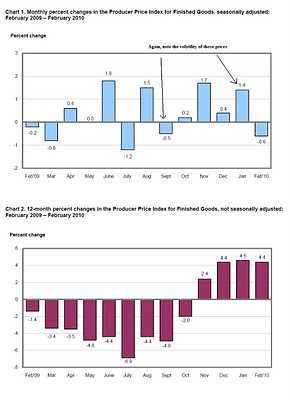 Finally, finished goods — which include by definition the previous month’s crude and intermediate numbers — have been bouncing around as well. Here is a chart of the monthly and 12 month change in the PPI. Note that negative readings are typically associated with large drops in either food or energy prices (which are explained by the commodity price chart above): 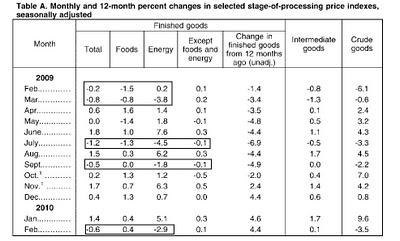 Here is a chart of the year over year percentage change in producer prices: 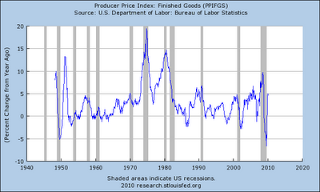 While the number has recently spiked, it has done so because of the incredibly low year over year reading earlier this year. Also note the year over year number is hardly extraordinary.

Also note that with a high unemployment rate there is no inflationary pressure from wage increases.

Now to to CPI:

On a seasonally adjusted basis, the Consumer Price Index for All Urban Consumers (CPI-U) was unchanged in February, the U.S. Bureau of Labor Statistics reported today. Over the last 12 months, the index increased 2.1 percent before seasonal adjustment.

The food index also edged up in February. The food at home index rose slightly, the net result of the major grocery store food group indexes posting a mix of modest increases and decreases. In contrast the energy index declined in February. Decreases in the indexes for gasoline, electricity, and fuel oil more than offset an increase in the index for natural gas.


Let’s go to the charts:

These are not levels that should scare anyone. 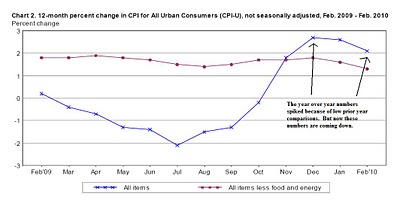 The YOY numbers are also well-contained, as shown by this longer YOY chart of the percentage change in CPI: 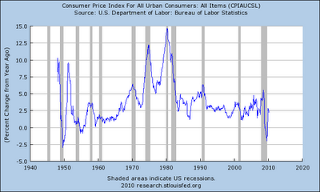 Finally, let’s look at possible monetary causes of inflation. Sometime over the last year, Art Laffer argued the explosion in the nation’s monetary base would lead to unprecedented inflation. First, here is a definition of monetary base:

In economics, the monetary base (also base money, money base, high-powered money, reserve money, or, in the UK, narrow money) is a term relating to the money supply, the amount of money in the economy. It is highly liquid money and includes currency and vault cash. The monetary base consists of coins, paper money, and commercial banks‘ reserves with the central bank.

Here is the current chart of the year over year percentage change in the monetary base: 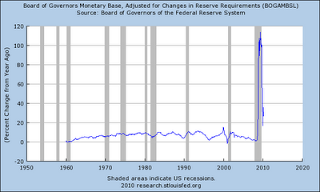 As the chart shows, at the height of the financial panic, the Fed injected a large amount of liquidity into the system. But, as the chart also shows, that number is also now decreasing at a substantial rate. In addition, here are the year over year percentage change charts of M1, M2 and MZM: 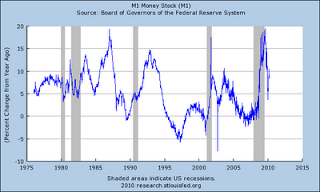 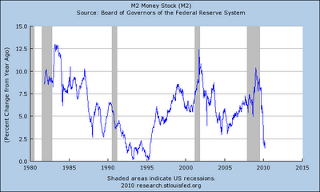 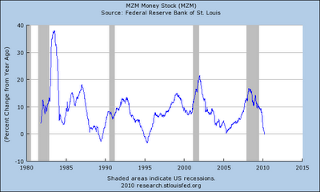 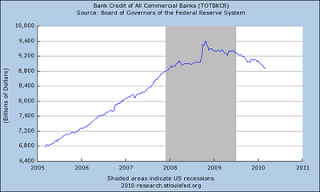 The bottom line is clear: inflation is not an issue right now.