On Friday, the BEA released the second revision of first quarter GDP. These are great reports because they provide a good snapshot of the overall economic situation. As such, a closer look at the data is warranted. All charts below are from the St. Louis Federal Reserve and are in chained (inflation-adjusted) 2005 dollars. You can click on all the charts to get a larger chart.

Personal consumption expenditures (PCEs) comprise the largest part of GDP. Here is a chart of overall PCEs for the last year. 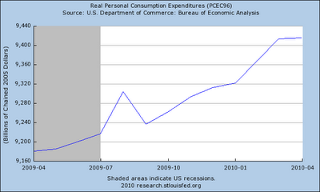 Overall PCEs (which comprise 70.7% of real GDP) have been increasing for the last year and they increased slightly last month. 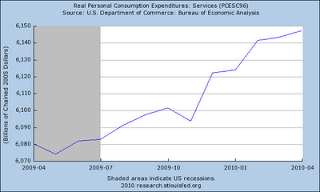 Services comprise the largest percentage of PCEs at 65.4%. They have been increasing for the last year at a consistent rate. 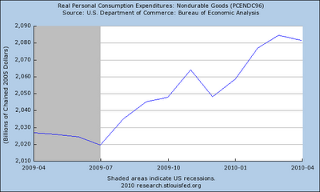 Non-durable goods’ expenditures — which represent 22% of PCEs — have been increasing for the last year as well, although they dropped last month. 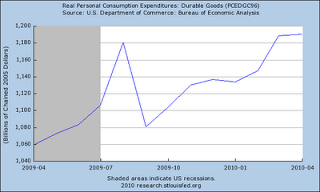 Durable goods — which comprise the smallest percentage of PCEs — increased sharply at the end of last summer thanks to the cash for clunkers program. After dropping the next few months they have rebounded at a solid rate.

The next largest percentage of GDP is investment which comprises 12.6% of real GDP. 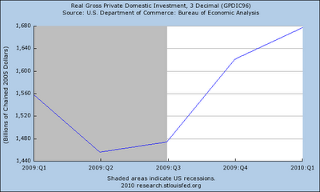 Real gross private domestic investment picked-up strongly in the 4th quarter and moved up in the first quarter as well. 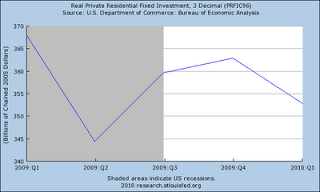 Residential fixed investment (which accounts for 21% of investment) dropped in the first quarter, although it had been rising for the preceding two quarters. However, the best way to describe the last year’s action is a sideways move. 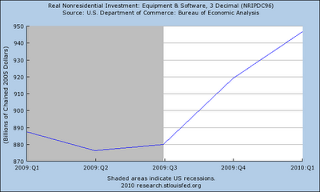 There is good and bad news in the import/export figures. 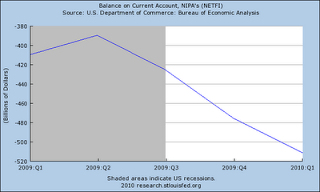 The bad news is that collectively, the trade balance is again moving in the wrong direction — that is, the US is net importer. 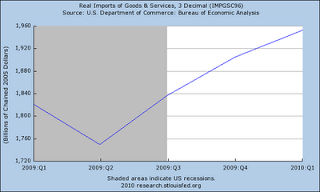 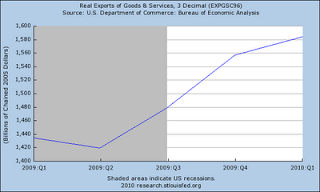 And while they are less than imports, the overall pace of increase in exports is also very encouraging. In fact, manufacturing has been a key component of the recovery.

Finally, there are federal and state expenditures. 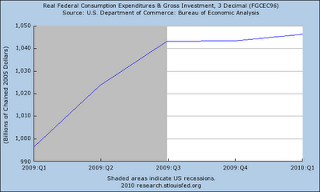 Real federal expenditures have actually been moving nearly sideways for the last two quarters, while 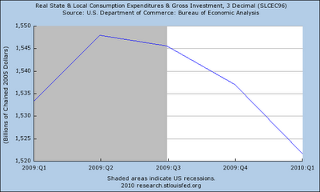 real state consumption expenditures and investment have been decreasing for the last three quarters.

The most striking feature of the data is the lack of contribution of growth from government expenditures — which is caused entirely from the decrease in state and local expenditures. This means growth for the last two quarters is coming almost entirely from the private sector. In addition, the largest part of GDP — PCEs — have demonstrated a consistent rate of growth. Additionally, private investment is picking up as are exports. In conclusion, the economy grew for the last three quarters, which is a required development for lowering the unemployment rate.