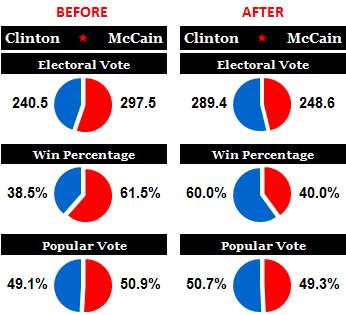 Clinton gains about 50 electoral votes, and 3.2 percent in the popular vote tally. Her win percentage improves from 38.5% to 60.0%. Across the board, these numbers are about 70% as large as Obama’s Unity Bounce — which is a predictable result, since there are about 70% as many Obama defectors as there are Clinton defectors.

This would produce an awfully interesting election on the state-by-state level: 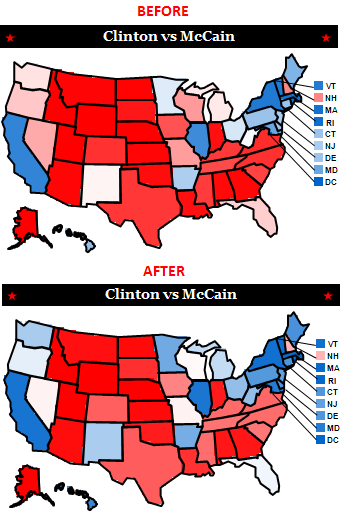 Clinton would be in a strong, if vulnerable, position. Formally, we have Clinton projected to win Kerry states, plus Florida, Ohio, New Mexico, Arkansas and West Virginia, but minus New Hampshire and Wisconsin. That would give her exactly 300 electoral votes. But there also a lot of states colored white, or a very pale shade of color, indicating toss-ups. Her win percentage is 62% in Michigan, 53% in Florida, and 55% in Oregon; New Mexico and Washington are also below 70%. If she lost Florida and Oregon, for instance, she’d fall 3 electoral votes short of the nomination. On the other hand, she’d also have some further pickup opportunities: both Nevada and Missouri are at 48%, and Wisconsin at 49%. Pennsylvania, meanwhile, gets all the way up to 83%, at which point she might be able to win it without a serious investment of resources. It would be a losable election, but one that would be hers to lose.