U.S. Secretary of State Hillary Clinton arrives in Moscow today to begin three days of talks with high level Russian officials including President Medvedev and Foreign Minister Sergei Lavrov. On the second leg of a 5-day, tour through the EU and Russia, Clinton is coming off a whirlwind summer of diplomacy, largely in the background of the Obama administration’s foreign policy.

Many issues crowd the Secretary’s plate. Though day-to-day operations of the Afghanistan, Middle East (including Iraq) and Sudan issues have been farmed out to special envoys, Clinton maintains the more important policy-setting and oversight role. Major diplomatic developments have occurred with regard to US-Russian relations, as well as small but important progress by Clinton’s State Department with Iran and North Korea. Outreach in Northern Ireland, along with a focus on stronger cooperation with US allies in the EU and NATO, has been an additional priority for the administration.

Comparing the travel itineraries of Clinton and her two predecessors at State in their first years, we see an interesting trend. 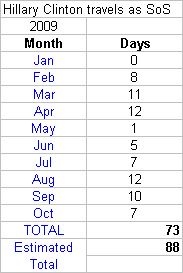 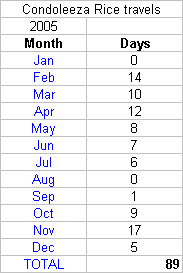 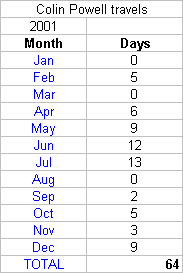 Though Clinton has only completed nine months in office, she has already set a blistering diplomatic pace. On track to spend 88 days on overseas diplomatic travels, she could pass Condoleeza Rice’s first year as SoS if she has additional October travel (only Clinton’s current trip is factored in). 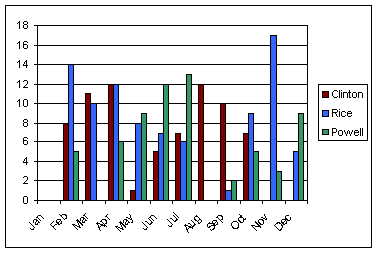 Rice’s tenure began the quickest, with her first three full months including 36 of her 89 travel days — over 40 percent. The end of the year also was jam packed, including her big push in the Middle East, which took up most of the month of November. Powell’s first year was much quieter in travel terms, culminating with the 9/11 attacks in September. The diplomatic flurry that might have been expected was rather subdued, in fact, as Powell slowly found his role undermined by the Defense Department, National Security Council and military.

What is notable about both is the lack of real action during late summer – where both Rice and Powell essentially took a break from travel or serious diplomatic action in August or September. Neither took a single trip in August, and just token trips occured in September or early October, coinciding with Washington’s summer slowdown.

Clinton, however, has had a summer of action with no slowdown in sight. While her schedule in late spring had a lull, it has been furious since then. It seems likely to continue this way for the remainder of the year, with Afghanistan’s diplomatic situation in great peril, and opportunities in Russia, Iran and possibilties in the Middle East and North Korea.

What does this mean in practical terms? By some measures, we should include the activities of Special Envoys Holbrooke, Mitchell and Gration in the calculation, as they have many of the powers that Clinton brings, having been empowered by the President and State Department. As alluded to by the Nobel prize committee, the Obama adminstration has embraced the diplomatic approach with full force. Not surprisingly, the strategy has yielded some early victories, such as the Iranian nuclear fuel deal, better prospects for cooperation on nuclear drawdown with Russia, and happier EU allies. But major, concrete changes in geopolitics it has not yet yielded. Hopefully Secretary Clinton will not wear herself out (or further injure herself) this year and her special deputies will find success on their assignments. Things are likely to remain quite busy.
—
Renard Sexton is FiveThirtyEight’s international columnist and is based in Geneva, Switzerland. He can be contacted at sexton538@gmail.com