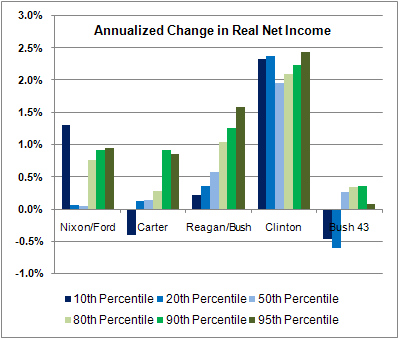 This is a chart, culled from Census Bureau data, showing the performance of real (inflation-adjusted) household income for various income classes during the last several presidencies. As you’ll see, I’ve lumped together consecutive administrations when the same party remains in power. Also, the data omits transition years — for example, 2001 is a transition year between Clinton and Bush, and it’s not clear who to credit/blame for the economy’s performance in that year, so I’m skipping it.

There’s a lot to look at in this little chart. Under Nixon/Ford, the very wealthiest did reasonably well, but oddly enough, so did the very poorest (this may have been LBJ’s Great Society programs belatedly kicking in rather than anything Nixon/Ford did). But the middle class was left out of the mix, their incomes barely growing over eight years.

In Jimmy Carter’s one term in office, the economy wasn’t performing terribly well for most anyone, but the poor bore the brunt of the problems. The principal problem during Carter’s tenure was inflation; there is some evidence that higher inflation rates tend to hit the poor disproportionately, although this is debated.

Then we get to Reagan/Bush. And we see a large accumulation of wealth up the economic ladder. When Ronald Reagan took office in 1981, the ratio between income at the 90th percentile and income at the 10th percentile was 9.2; when he left office eight years later, it was 10.2.

Under Clinton, by contrast, the economy was a rising tide that lifted all boats. The poor, finally, did quite well for themselves, their incomes appreciating at about 2.5 percent annually, but the rich did just about as well — in fact, the rich did better under Clinton than they had under Reagan and Bush. The rich/poor gap, if measured as a ratio, did not increase appreciably under Clinton. The 10th percentile saw their incomes increase by about 17 percent during his tenure, and so did the 90th percentile.

Finally, we get to #36, George W. Bush. Bush is getting a bit of a break here, in fact, because the Census Bureau does not yet have data online for 2008; the numbers will be even worse once it does. Nobody did especially well under Bush, but it was the poorest quartile or so who actually saw their incomes decrease.

Manifestly enough, as we see under Reagan/Bush, the government has some capacity to allocate income to one class to another with its economic policy. In general, however, the fates of different economic classes are linked. Since 1967, the correlation in the change in year-over-year income between the 10th and the 90th percentiles is .63.

This latter characteristic is something that I think a lot of liberals tend not to have a good appreciation of. There is sometimes a tendency among liberals to see the economy as a zero-sum game, but this is not really the case. When the economy is doing well, everyone tends to do well, unless the President is trying really, really hard (as Reagan did) to steer that growth only toward certain income classes. And when the economy is doing poorly, everyone tends to do poorly. The poor did awfully under George W. Bush, but the wealthy didn’t perform all that well either.

This may be a result of the tendency of liberal thinkers focus their attention on the rich-poor gap, usually measured as a ratio. This can certainly tells us something valuable, but if the goal is to look after the economic well-being of the least well-off, it is probably better to look instead at how the least well-off are performing relative to themselves. A reasonable “progressive” economic goal, for instance, would be to maximize the long-run real income achieved at the 10th or 20th percentile. Essentially, this is a slightly bastardized version of the Rawlsian maximin construct.

How you go about achieving that maximization, of course, is the tricky part. I’ve included the qualification “long-run”, because it is almost assuredly not as simple as a mass transfer of wealth achieved through taxation policy. This might make the poor better off in the near-term, but quite possibly not in the long-run if it the tax shock significantly hampered long-term growth.

For my money, the Clintonan idea of “aggressive” pro-growth policies coupled with a relatively high tax rate on the rich is an attractive one. Let the rich make their money and then tax them (and/or improve social welfare programs for the poor). But don’t do things that inhibit economic growth because you’re afraid of the redistributive effects. A good example is something like free trade. The emerging consensus among both liberal and conservative economists appears to be that while free trade does increase GDP (as has long been believed), it also has some redistributive effects; the “consensus” solution to this is to have free trade coupled with a more robust safety net.

There is a separate issue about the appropriate amount of business regulation. An overly lax regulatory scheme, as under Bush 43, does not appear to benefit much of anyone. To some extent, the purpose of regulation may be to prevent business from harming themselves due to a sort of tragedy of the commons. This was arguably the problem inherent to the credit crisis: each individual businesses had become so good at hedging its own risk that collectively the banks wound up hedging against themselves, the whole system eventually collapsing like a Jenga game.

Another trap that we can potentially fall into — but this one being more perilous for conservatives — is to pursue a set of policies that benefit existing businesses at the expense of emergent businesses. For example, I believe that this problem is manifest in the area of energy, an area where investments in cleaner-burning fuels are quite probably associated with improved long-run economic performance. This might hurt Exxon and GM — while helping the economy as a whole, which is what policymakers should be concerned about. But existing businesses have lobbyists and emergent ones don’t (or at least not as many).

The other potential lesson from the Clinton record, which I’ve argued may also be observable in the response of the economy to the housing crisis, is that the presence of a robust middle class in fact strongly related to the health of the economy as a whole. Note, again, that the wealthy actually did better under Clinton than they did under Reagan/Bush, even though Reagan/Bush were trying to stack the deck in favor of the wealthy. The explanation I find intuitively appealing is that there is some sort of optimum supply:demand balance in the economy, and that when too large a fraction of income accrues to the wealthy, this balance becomes out of whack because their are too many suppliers (beyond a certain level of income, the wealthy start to invest/supply their excess income rather than consume it) and not enough consumers. Almost all of the countries that are comparably wealthy to the United States have flatter income distributions, the only exceptions being Hong Kong and Singapore (which are as much cities as countries).

So to summarize, here are a few of the working assumptions about the economy that I’ll tend to make on this website. I am open to being disabused of these notions, but I’ll want to see evidence to the contrary:

1. Growth is good. A rising economic tide tends to lift all boats. We should generally not pass up opportunities to create growth, such as through freer trade, because we are concerned about its redistributive effects. Instead, grow first and then redistribute through tax policy and/or improved safety nets.

3. To the extent we evaluate the welfare of poorer Americans, we should tend to look at their income in an absolute sense, rather than relative to that of wealthier Americans.

5. Identifying optimum oversight and regulatory schemes is likely to have significant nonzerosum benefits, possibly including to the regulated businesses themselves.