Los Angeles Dodgers ace Clayton Kershaw has been the presumptive Best Pitcher In Baseball for so long that it might as well be printed on the front of his baseball card. Since his debut during the 2008 season, Kershaw has over 10 more wins above replacement than any other pitcher in the game — his former Dodgers teammate Zack Greinke is a distant No. 2 — and he has consistently managed to fend off any challenger to his crown as the game’s greatest.

But this season, Kershaw has shown a few surprising cracks. (Yes, this is basically akin to saying, “some of Mozart’s concertos were just great, not brilliant.”) Despite throwing six (only six?) shutout innings on Saturday, Kershaw’s earned run average is the highest it’s been since 2012, and his fielding independent pitching, which measures a pitcher’s dominance in the factors he directly controls (strikeouts, walks and home runs), is at its worst since Kershaw’s rookie year. He’s been giving up an uncharacteristic number of home runs (a career-worst 17, and it’s not even July), perhaps having been swept up in the juiced-ball power surge that’s jolted so many pitchers over the past few seasons. Two starts ago, he let the lowly New York Mets take him deep four times, the only four-homer game he’d ever suffered in his entire career. As a result of all this, Kershaw’s status as the game’s unquestioned top ace is in danger for the first time in a while.

FiveThirtyEight’s MLB Elo ratings have a component that assigns each starting pitcher a grade, reflecting how much influence he wields over his team’s chances of winning. Kershaw usually has the top mark in baseball; up until the past two weeks, he’d held it for 37 of the previous 38 weeks of MLB action, including 31 consecutive weeks between mid-May 2016 and late April 2017. But Max Scherzer of the Washington Nationals passed Kershaw a few weeks ago, thanks to his ongoing run of six consecutive starts with double-digit strikeouts, and Boston Red Sox ace Chris Sale has edged ahead of Kershaw as well. (Sale passed Kershaw as No. 1 for a week in April, but Kershaw quickly reclaimed the top spot and held it for six more weeks.) 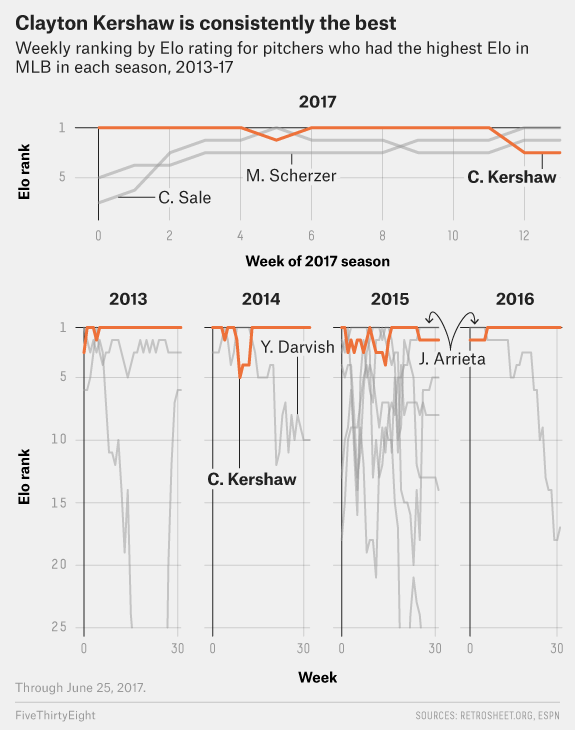 Now, Kershaw ranks “only” third in our starting-pitcher ratings. The last time Kershaw sat so low was midway through the 2015 season, when for one week in July he dropped behind Sale, Scherzer and then-Cincinnati Reds ace Johnny Cueto, who’d just finished spinning an 11-strikeout complete-game shutout. But within two weeks, Kershaw had climbed back to No. 1, the place he’s spent 106 total weeks (out of a possible 142) since early in the 2013 season. Only three pitchers in the expansion era (since 1961) — Pedro Martinez, Roger Clemens and fellow Dodger Sandy Koufax — have logged more weeks in the top slot than the 29-year-old Kershaw has in his career.

Since Kershaw first rose to No. 1 in 2013, the most consistent assault on his top ranking has come from Jake Arrieta of the Chicago Cubs. For 13 straight weeks between the 2015 stretch run and the first month of the 2016 season, Arrieta ranked first in Elo as part of his stunning ascent from washout to Cy Young winner. That’s the most weeks (consecutive or not) anybody has stood between Kershaw and the No. 1 slot since 2013; the Rangers’ Yu Darvish ranks second with six weeks of sporadic challenges.

Right now, Scherzer is in his third week (second in this particular bid) atop Kershaw’s throne. His peripheral stats — and, even more so, Sale’s — have been superior to Kershaw’s on the season so far. Maybe this is the season Kershaw’s grip on best-pitcher status loosens.

Given how much Kershaw’s dominated that distinction over the past half-decade, though, I’ll believe it when I see it.