Think of a dangerous high school sport, and football is probably the first that comes to mind. You might not think of those students in uniform on the sidelines, cheering for the players.

And yet cheerleading isn’t as safe as you might think, which was one of the reasons New York State — following 34 other states and Washington, D.C. — reclassified it as an official school sport last month.

Media coverage of the New York decision largely focused on athlete safety — in some cases referring to cheerleading as one of the most dangerous sports. The raw statistic that cheerleading accounts for two-thirds of all catastrophic injuries among female high school athletes was repeated by news outlets across New York.1 Some, like The Wall Street Journal here, showed an iteration of a chart similar to this:

The data for this chart was pulled from the 29th annual report from the National Center for Catastrophic Sports Injury Research, an independent research body at the University of North Carolina.2 The center classifies catastrophic injuries as either “serious,” “nonfatal” or “fatal.” An injury is considered serious when it’s severe but has no ongoing functional disability. For example, a 17-year-old cheerleader in 1998 attempted a back flip, slipped on wet artificial turf and landed on her head, shocking her spinal cord and causing temporary paralysis. Nonfatal injuries lead to permanent disabilities. Fatal injuries need no explanation.

But it’s not the raw numbers that should scare people. (These numbers are misleading, as I’ll explain in a bit.) Rather, it’s how these cheerleaders are getting injured that should warrant concern.

Cheerleading is different from every other high school sport (for which there is injury-tracking data) in one critical way: More cheerleaders are getting injured during practice than in competition. And that’s why cheerleading’s official designation as a sport could go a long way toward reducing the number of injuries that make it risky.

The earliest incarnation of high school cheerleading — think girls in school-letter sweaters and thick skirts encouraging a football team — has morphed into a hypercompetitive and acrobatic institution. And all the flips, throws, jumps and human pyramids have resulted in more injuries. A lot more injuries. That’s why it has been seductive for media organizations to report raw numbers.

But it’s the rate of injury that matters.3

A rate makes a world of difference in how people interpret dangers and risks. For example, if I told you there were 179 unprovoked shark attacks in the U.S. from 2006 to 2010, you might get frightened. But when I turn that into a rate — by factoring in that 200 million people visit beaches every year, and they visit multiple times — it shows that the probability of being attacked by a shark is one in 11.5 million. That’s much less frightening.

Similarly, when we factor in how many high-schoolers are participating in cheerleading, we get a different perspective on “the most dangerous sport” narrative.4 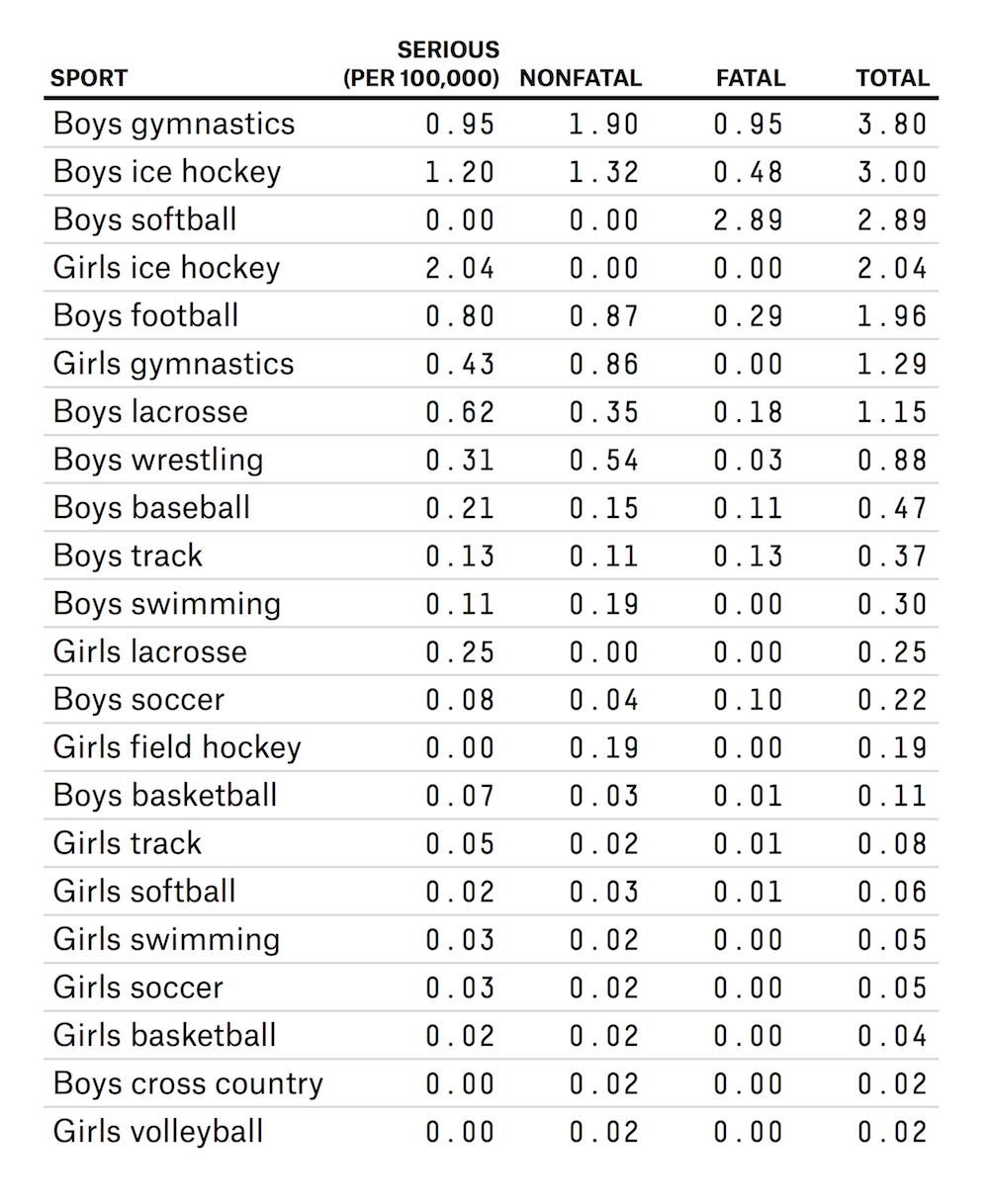 It’s crucial to get perspective on these numbers. Let’s assume that Mueller’s estimate — 2.68 catastrophic injuries for every 100,000 high school cheerleaders — is accurate. In comparison, each year 17.9 of every 100,000 New York state residents are hospitalized for traffic-related pedestrian injuries — nearly seven times higher than the upper-bound catastrophic-injury rate for high school cheerleaders. So, even if cheerleading is the most dangerous high school sport, it might be less dangerous than walking to work.

But what about more common, non-catastrophic injuries, like concussions?

Dawn Comstock, a professor at the Colorado School of Public Health in Denver, runs High School RIO, a national database that has monitored 20 high school sports since 2005. She referred me to a 2012 paper published in the American Journal of Sports Medicine. The paper, based on High School RIO data, looked at concussions among high school athletes — where they occurred (in practice or competition) and in what sport — as well as participation rates during the 2008-10 school years. The finding?

“Cheerleading is not nearly as dangerous a sport as some of the previous research painted it to be,” Comstock said. “It has the 10th-highest concussion rate of the 20.”

Concussions are a compelling data set for tracking the dangers of a sport because they’re relatively common, and yet they’re severe enough to be reported (as opposed to, say, sprains and strains). But they often don’t have long-term impact. Here are the competition concussion rates per 100,000 athlete exposures:5 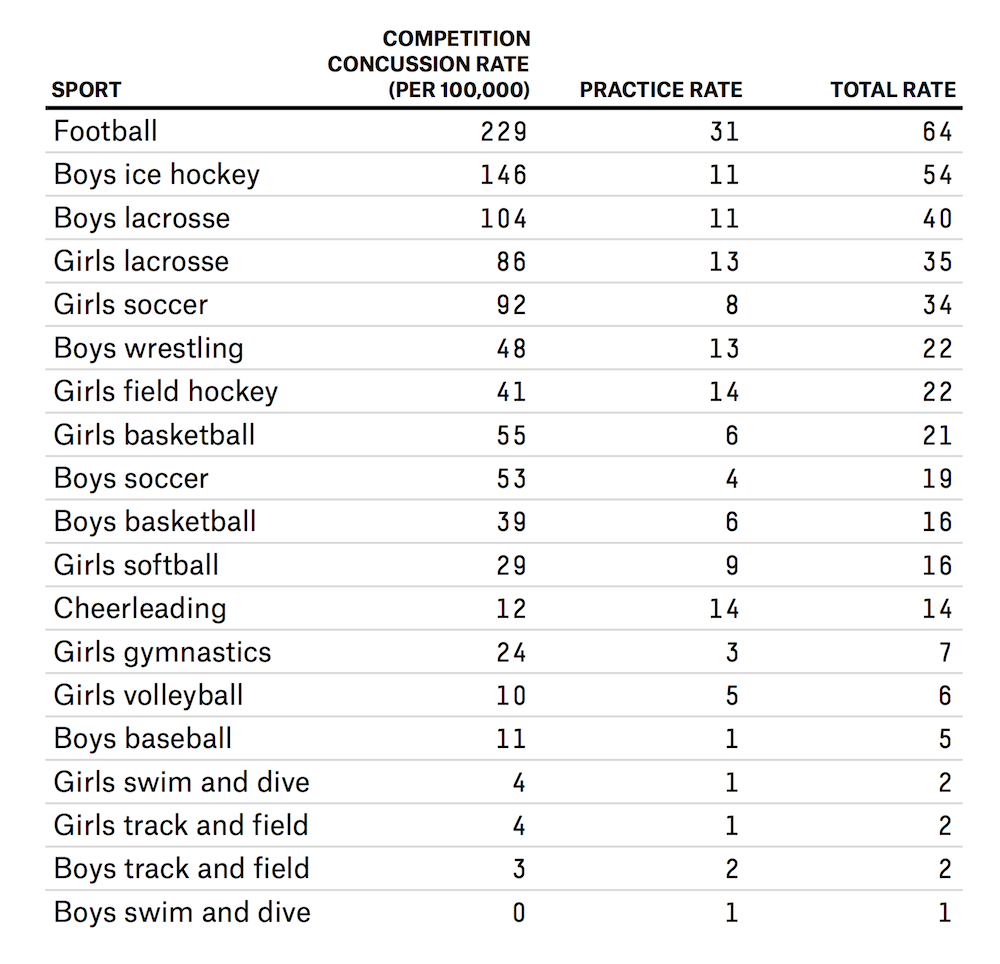 Cheerleading falls in the middle of the pack. The total concussion rate across all girls sports is 41 concussions per 100,000 competition athlete exposures; cheerleading has a rate that’s about three-tenths of that.

“When we delve into the data more closely, we can actually find out where practice-related concussions are occurring,” Comstock said. “With cheerleading, they’re occurring all over the place. They’re occurring on asphalt, on grass, on tile. And if you think about it, if cheerleading isn’t considered a sport, [it] may not be afforded the same resources — even for practice — as other sports.”

Here’s Comstock’s theory on why the injury rate is higher during practice: If cheerleading isn’t officially designated as a sport at a school, there are better odds that the team isn’t practicing on athletic mats and instead setting up in, say, a parking lot or school cafeteria. In competition, however, the students are likely to be on proper mats and therefore less likely to be at risk for getting a concussion. The reports from the 2011 catastrophic injury study at UNC seem to back this up; a high number of the injuries seem to occur both during practice and also as a result of contact with a hard surface.

What does that mean? “Recognizing cheerleading as a sport may actually make the sport safer because they should then be given a designated space to practice,” Comstock said. Official sport status means that money, equipment and resources come from schools, not necessarily from the cheerleaders themselves or alternative sources.

Is there a difference in concussion and injury rates between the 35 states that have made cheerleading a sport and the 15 that haven’t? We don’t know, because the data doesn’t exist for that kind of determination yet. But Comstock’s team is working on it.

Although the raw-injury count in cheerleading may tell a headline-grabbing story, it’s important to look at those numbers in context. Yes, catastrophic injuries happen, as do concussions. But keeping in mind that a lot of kids are cheerleading — and that every day we may take risks that have even grimmer statistics — we can get a better picture of the actual risks involved.