In the last few weeks, a few events have highlighted instability and strained relations in Latin America. The overthrow of Honduran President Manuel Zelaya has reopened discussions about the applicability of OECD-style democracy in the region, while the most recent spat between Colombia and Venezuela has re-illustrated the highly divergent foreign policies of the two countries.

Throughout the dialogue about legitimacy of government, economic policy, and foreign affairs, a constant storyline is with regard to the impact of U.S. influence (helpful assistance or dangerous meddling, depending on who you talk to) in the region. With a long history, inter-American relations between the United States and its southern neighbors has long been built on the Monroe Doctrine, a policy that regards “interference” from Europe or Asia in the hemisphere as an act against the US. Since its inception in the 1820s, however, critics have regarded this as a thinly veiled justification for a hegemonical attitude in Washington, a perception that the Clinton and Bush adminstrations were not able to shake.

Indeed, during his Presidential campaign, Barack Obama explicitly criticized the Bush adminstration’s approach to relations with Central and South America — not as being overly-interventionist, instead characterizing it as under-engaged.

[Bush’s] policy in the Americas has been negligent toward our friends, ineffective with our adversaries, disinterested in the challenges that matter in peoples’ lives, and incapable of advancing our interests in the region.

After his election as President however, Obama taken a softer approach, while still maintaining that active engagement, including possible intervention, remains his goal.

While the United States has done much to promote peace and prosperity in the hemisphere, we have at times been disengaged, and at times we sought to dictate our terms. But I pledge to you that we seek an equal partnership.

Given the difficulties that have marked US foreign affairs over the last decade, particularly in the Middle East and Central Asia, many international relations experts regard Latin America, including the Caribbean, as a region where progress could be less difficult to facilitate. Inextricably tied to the issues of illegal immigration and regional economic integration (e.g. NAFTA and CAFTA), the dividends of tackling pan-American issues could be quite significant, both in terms of international goodwill, domestic political capital, and economic revitalization.

Returning to the issues of the month that drew our attention, we can examine the links between Honduras, Colombia and Venezuela, and the larger issue of US relations with Central and South America.

First, let’s have a look at the recent history in Latin America in terms of two key indicators of well-being, first life expectancy, then national income per capita. 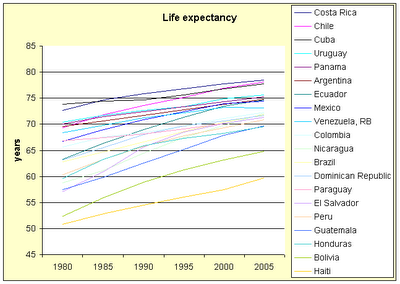 From 1980 to 2005, a dramatic improvement in life expectany was realized across the region, with even conflict and disaster stricken Haiti now at 60 years. Ousted President Manuel Zelaya has seen his country, Honduras, rocket from 58 to just under 70 years, though Honduras remains 5-10 years below most regional neighbors, including Venezuela and Colombia. Excluding Bolivia and Haiti, there has been a general convergence around the 70-78 range. 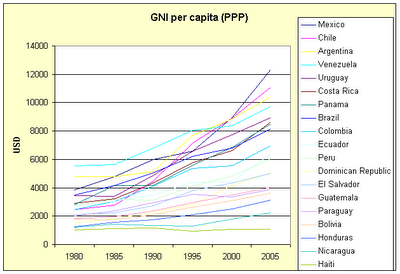 In economic terms, however, the past 25 years have seen a great deal of heterogeneity in terms of national income growth per capita. Mexico joined the OECD in 1994, a sign of its relative wealth, while Chile and Argentina have also seen significant income growth. Venezuela has long been near the top of income table in the region due to its oil wealth, but since the late 1990s, when Hugo Chavez became President, it has fallen to fourth overall. This has been due to a relative lack of diversification in the economy and the use of oil as a social rather than economic growth instrument. Honduras is again far at the bottom, a position it has maintained as instability and reliance on agricultural exports to North America have eroded growth opportunities. The chart tends to indicate two clusters, after a divergence in the late 1980s. Colombia sits in the middle, though more in line with the higher cluster than the lower.

Polling done by the market research and politics group CIMA have indicated that in 2009, two two areas dominate the region’s thinking. 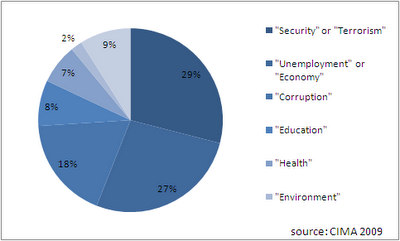 Like the rest of the world, economy is high on the list, with 27% of people in the region listing it as their top concern. However, though the global recession has acutely impacted the region, security concerns still top the list, with nearly 30% of respondents citing security or terrorism as the chief issue. With personal security a growing or continued problem in Mexico, Colombia, Bolivia, Guatemala and others, the role for the US as a actor for stability is clear. In poorer, more secure countries like Honduras, Nicaragua, Dominican Republic or Paraguay, however, the economic crisis has had a greater impact, and therefore yearn more for economic assistance. 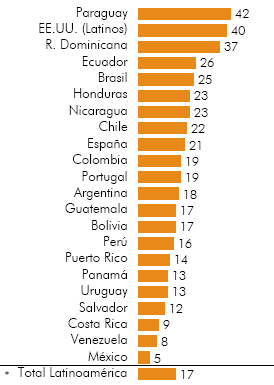 How to deal with more antagonistic counterparts has yet to be seen, however. Hugo Chavez has built his governing persona and style around an approach to socialism that explicitly repudiates the US political, economic and social model. Surging after the coup attempt in 2002, which was allegedly linked to the US, namely Bush adviser Otto Reich, Chavez rebuilt his base of support around the ideas of anti-globalization and anti-Americanism. Chavismo has taken a hit in more recent years, as some former political allies have begun to reject Chavez’ claim on leftist ideas.

At the same time, Colombian President Uribe has maintained extremely close relations with US, working intimately to oppose the FARC rebels and associated weapons and narcotics — exactly the issue that again wedged between Venezuela and Colombia. Nonetheless, both leaders maintain positive approval ratings, with Uribe outstripping his regional neighbors by around 10 points. Even Zelaya managed to rebound in early 2009, before his ill-fated attempt to change the electoral rules. 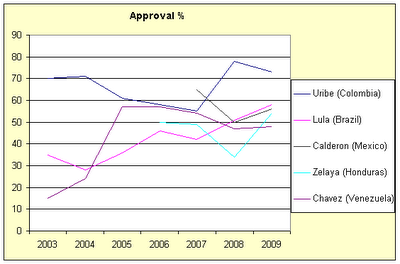 In the end, the “Obama approach” might work better in Latin America than elsewhere, in that results may be forthcoming in a way that they will likely not in other areas of interest, such as Russia, Iran, and Pakistan. However, if the current focus on dialogue and the rhetoric of cooperation continues in lieu of concrete actions on security and economic development in the region and immigration reform at home, the actual influence of the US may be eroded. In the case of a continued poor US reputation, countries like Nicaragua and Paraguay (and of course Venezuela) will likely continue to turn to other partners, like China, India, Russia, along with regional powers like Brazil and Mexico for key relationships — the ultimate demise of the Monroe Doctrine thinking.