Here are Charlie Crist’s favorability ratings among registered voters in Florida, according to the Quinnipiac poll. 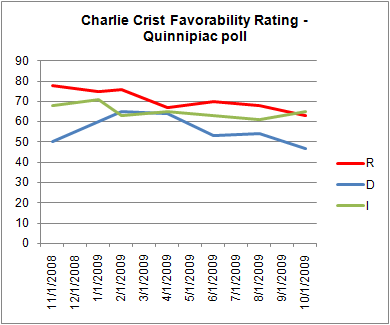 Crist’s favorability ratings are higher among independents than among Democrats or Republicans (although not by a statistically significant margin in the former case). That’s very unusual for a politician who does not actually call himself an independent.

Still, although Crist’s favorability ratings with Republicans have declined some, they’re still pretty decent. So why is he in so much trouble against Marco Rubio?

For one thing, Republican voters really like Rubio; his favorability rating among Republicans in the latest Quinnipiac poll was 44-3 (!). What’s a little scary for Crist is that about half of all Republicans have yet to form an opinion about Rubio — once they do, the race will presumably get even closer.

For another thing, Florida voters preferred by a 42-26 plurality — including a 40-32 plurality of Republicans — that Crist would have run for another term as governor rather than run for Senate. The message that Florida Republicans seem to be sending to Crist is this one: We like you well enough, Charlie. But we also like Marco. So why did you make this hard on us by running for Senate, when we’d have been perfectly happy to re-elect you to Tallahassee instead?

In certain ways, this reminds me of the mayor’s race here in New York, where voters approved overwhelmingly of the job that Michael Bloomberg was doing, but nearly voted him out of office because he re-wrote the rules to run for a third term. Crist didn’t re-write the rules, but his decision, in some ways, seems equally selfish. If he was doing such a good job as governor, why not stay there? Isn’t being the governor of the fourth largest U.S. state a more powerful position than being one of 100 Senators? Crist is only 53 — what’s the rush? What’s he hoping to accomplish in Washington? It’s going to be a fairly difficult decision for Crist to rationalize to people.

That’s not to say that some of this Republican Purity Test stuff isn’t also a part of the story (grassroots conservatives only seem to have been encouraged by the results in NY-23, even though their candidate lost). But it’s not the whole story: Crist is much more vulnerable than he otherwise would be because had the option of running for another term as governor and declined to do so.