Welcome back to our Hall of Pretty Damn Good Players, a celebration of unsung athletes who won’t make their sport’s Hall of Fame but still deserve to be celebrated for their accomplishments and impact on the game. Today’s entry is a player whom few younger fans remember today but who was a fixture behind home plate from the mid-1990s through the mid-2000s — and has gained an unwelcome bit of historical significance in recent years, through no fault of his own.

I’m referring to former big-league catcher Charles Johnson, who played most notably for the Florida Marlins but also saw time with the Orioles, Rockies, Devil Rays, Dodgers and White Sox in a 12-year MLB career. And his historical import? Johnson was the last Black American player to be an everyday catcher in the majors, a drought that stretches back to the 2005 season (the year after Johnson caught 91 of Colorado’s 162 games).1 When Claire Smith of The Undefeated tracked Johnson down in April, he was still waiting for a successor to whom he could pass the baton.

“From 1995, it was just Lenny [Webster] and me,” Johnson said of the Black catchers he could remember as contemporaries. “Now there are none. To me, that is mind-boggling.”

But with more efforts to recruit Black players to the game in general (and to catch specifically), Johnson may yet serve as the inspiration for another generation of Black catchers. And as part of that, he should be remembered, for his great skills both behind and at the plate. Entering the 1992 draft out of the University of Miami — where he had been a first-team All-American in his final season, catching for one of the final four teams in the College World Series — Johnson was taken 28th overall by the Marlins. He quickly zoomed through the minor league ranks, putting up an .860 OPS and 47 home runs in 267 games split over two seasons between Single- and Double-A. (The performance earned Johnson Baseball America’s No. 7 overall prospect ranking in the spring of 1995.) That year, Johnson became a regular with the Marlins and instantly made his presence known at the major league level.

In 1995, Johnson tied second baseman Quilvio Veras for the team lead among position players in wins above replacement2 (3.0 in just 97 games), posting an above-average .761 OPS. He also won his first Gold Glove Award for stellar defense at the game’s most difficult position, all at the young age of 23 — one of only seven catchers who can say that.3 Among MLB catchers with at least 500 innings that year, only future Hall of Famer Iván “Pudge” Rodríguez (48 percent) gunned down would-be base stealers at a greater rate than Johnson’s 43 percent clip.

It was the first of four-straight Gold Glove nods for Johnson, helping him establish a well-deserved reputation as one of the game’s premier defensive backstops. In fact, according to fielding runs above average (FRAA),4 only 11 primary catchers since 1901 have been worth more behind the plate than Johnson, who saved 72 total runs over the course of his career.

After his rookie breakout, Johnson continued to improve his defense in 1996 (from +12 to +14 FRAA), though his hitting took a step backwards, with an OPS that dipped below .700 for the first time at any level as a professional. However, Johnson’s team started building momentum with the arrivals of outfielder Devon White and starting pitchers Kevin Brown and Al Leiter, helping Florida come within striking distance of a .500 record (80-82) for the first time in the franchise’s young history. And the next year, Johnson’s hitting skills returned — helping him produce the best season of his entire career, at the best possible time.

In 1997, Johnson had 4.6 WAR, the 39th-best season since 1901 for a catcher at the age of 25 or younger. He was the seventh-best catcher in baseball by OPS (.802) and the second-best on defense — behind Pudge, again — according to FRAA, where he was +19. (As part of that, Johnson went the entire season without committing a single error, an extremely rare accomplishment for a full-time catcher.) Few young catchers have ever played so well in a single season on both offense and defense; since the 1994-95 strike, only six others5 ever had a season in which they ranked among the top eight in both OPS and FRAA by the age of 25. If great teams are indeed built up the middle, then a performance like Johnson provided from behind the plate can form the cornerstone of a championship roster.

And by 1997, the Marlins finally had one of those. On top of returning stars such as White, Brown, Leiter and right fielder Gary Sheffield — and developing young Cuban starter Liván Hernández — Florida added even more talent going into the season, in the form of pitcher Alex Fernandez, third baseman Bobby Bonilla and left fielder Moisés Alou. The result was one of the most talent-laden and downright cool teams in baseball history, right down to its quintessentially ’90s teal-and-black color scheme. And during the regular season, Johnson was the top position player of the bunch by WAR.

As Florida progressed through the postseason, Johnson improved his OPS to .844 — second-best on the team among regular hitters, behind only the fearsome Sheffield (1.121).6 He hit .357 with an .844 OPS against the Cleveland Indians in the World Series, including a home run in Game 1 and a clutch single in the bottom of the ninth of Game 7, which helped the Fish tie the game (forcing extra innings).

Florida ended up winning in the 11th, earning Johnson a championship ring to cap off one of the best two-way seasons any young catcher had produced in a while. But like most members of the 1997 Marlins, Johnson would not stay in South Florida for very long. On May 14, 1998, Johnson was shipped to the Los Angeles Dodgers in an absolute blockbuster of a deal that also saw Sheffield, Bonilla, outfielder Jim Eisenreich and young pitcher Manuel Barrios head to L.A. for future Hall of Fame catcher Mike Piazza and third baseman Todd Zeile. Johnson had been doing fine before the trade, and he still won the NL Gold Glove in 1998 (his fourth-straight), but his hitting fell off (.638 OPS) after he arrived in Los Angeles, and he was traded again after the season, bouncing from the Dodgers to the Mets and then to the Orioles in a series of deals.

The upheaval led to a new phase of Johnson’s career. He was still a very good two-way catcher over the next three seasons with Baltimore, the Chicago White Sox and Florida (again), producing 11.0 WAR — third-most among MLB catchers over that span, trailing only Rodríguez and Piazza. But he would never again win a Gold Glove, and he was an All-Star only once more (in 2001). To use Rodríguez and Piazza as comparison points, Johnson couldn’t quite sustain the same Hall of Fame career path into his late 20s as they did, despite relatively comparable performances as 25-year-olds. 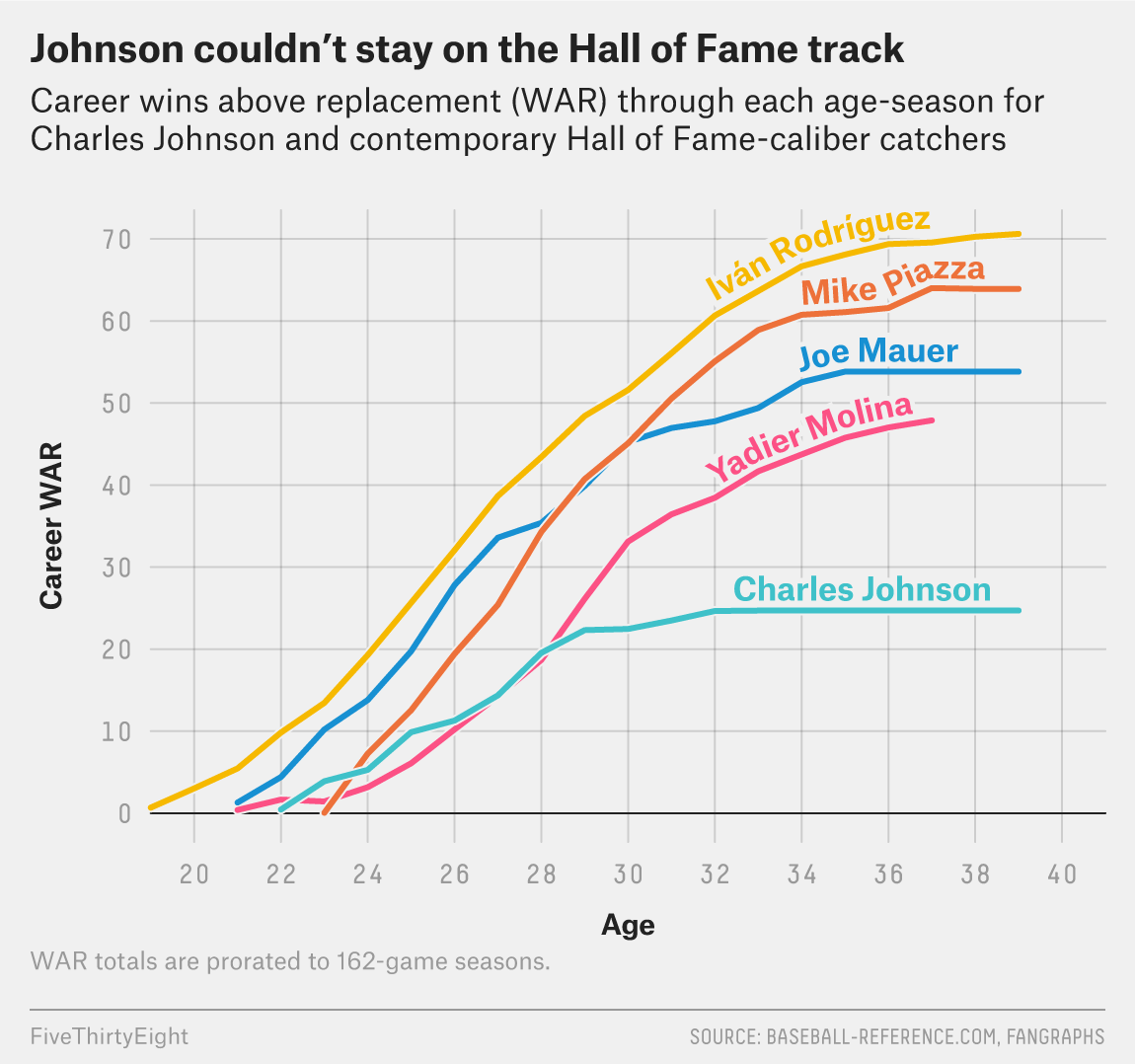 And after 2001, as he entered his 30s, Johnson’s performance tailed off significantly. He had to fight for playing time with the Marlins, Rockies and Devil Rays, primarily becoming a defensive catcher who could no longer produce the offensive numbers that had been a hallmark when he was younger. After four consecutive mediocre offensive seasons (with an OPS 14 percent worse than average), banged up by years of wear and tear behind the plate and struggling to latch on with multiple teams, Johnson’s MLB career ended when Tampa Bay released him midway through the 2005 campaign. In retirement, Johnson now works as a community ambassador for the Marlins and runs a foundation dedicated to helping families in need in the Miami area.

Like several members of our Hall of Pretty Damn Good Players, Johnson peaked early and couldn’t sustain the superstar trajectory he started on as a young player. As a result, he won’t ever get inducted into Cooperstown — but that doesn’t take away from his reputation as one of history’s greatest defensive catchers, nor does it diminish the vital role he played for the star-studded 1997 Marlins. (No less an authority than that team’s manager, Jim Leyland, called Johnson its most indispensable player.) And while only time will tell if a new class of young Black catchers eventually follows in Johnson’s MLB footsteps, those who do could scarcely find a better role model than a guy who was once one of the two-way exemplars at the position.