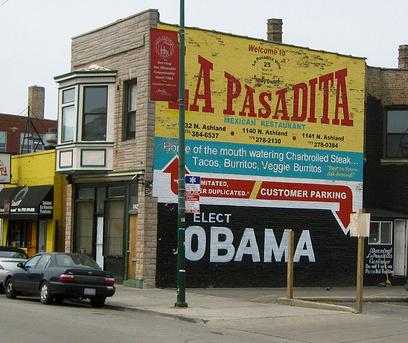 That is a picture of the signage at an extremely popular (and very good) taqueria in my neighborhood in Chicago. They have a conspicuously large sign which is visible from a major intersection and is probably worth a couple thousand bucks a month in advertising impressions, and have decided to devote roughly the bottom third of it to a homemade testament to Barack Obama.

Not that this anecdote should mean very much in the larger scheme of things. Obama barely carried my home district, the ridiculously gerrymanderd, Hispanic-majority IL-4, in the Illinois primary in February.

The Latino experience in America is primarily still an immigrant experience, and immigration boomed in the 1990s when the Clintons were in office. A lot of Hispanics who are now becoming citizens, or who are now registering to vote for the first time, came to America then, or had friends and family who did.

But I’ve been saying for a long time that one should not confuse the outpouring of support among Latinos for Hillary Clinton in the primaries with a lack of support for Barack Obama in the general election. Voting is intrinsically relativistic. I’ve made this comparison before, but would Hillary Clinton be regarded as running strong among Catholics if her opponent were John F. Kennedy?

I mention this because a couple of national polls — the new NBC-WSJ survey as well as Gallup’s extensive May tracking data — now show Obama with roughly a 2:1 lead among Hispanic voters. Exit polls had John Kerry winning Hispanics by only about 55-45 in 2004 (although that figure is disputed), so this is a gain the Democrats are making right at the same time that Latinos begin to vote in much greater numbers.

One saving grace for McCain: Hispanics do not vote monolithically. Mexican Americans vote differently from Puerto Rican Americans from Cuban Americans. And so we should not necessarily assume that Obama’s numbers are going to improve among Cuban voters in Florida.