Massachusetts is the largest state in America with a uni-partisan House delegation: All 10 seats in the Bay State are held by the Democrats. This November, however, that may change. The 10th District seat vacated by retiring Rep. Bill Delahunt–which in 2008 was Barack Obama’s least competitive of the state’s congressional districts — is up for grabs. 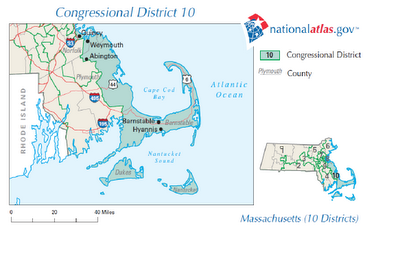 And this race is not just competitive, but is arguably hard to handicap. Indeed, David Wasserman of the Cook Political Report rates it a “toss-up”; Crystal Ball’s Isaac Wood rates it more favorably as “lean Democratic”; and just this week Stu Rothenberg upgraded it from “lean Democratic” to “Democrat favored.” Though each of these rating services issues updates at different times each month, and each uses slightly different language and categories–there may be some gap, say, between what merits a “lean D” for Crystal Ball compared to a “lean D” for Rothenberg–the point I’m trying to make here is that it’s unusual to find the three rating newsletters with three different assessments of the same district, as they do here. (At least for the moment.)

Demographically, MA-10 is overwhelmingly white, has a median household income about one-fourth higher than the national average, and its median age (42) is considerably above the national average (36), due in part to it’s sizable senior citizen cohort (17.2 percent; national average: 12.6%). Geographically, the district includes all of Cape Cod (Barstable County) and the Islands (Dukes & Nantucket counties), plus a significant chunk of what’s known as the “South Shore”–the part of Massachusetts south of Boston but not including the Cape, in this case starting around Quincy and heading southward toward the Sagamore and Bourne Bridges that link the Cape to the rest of Massachusetts over the Cape Cod Canal. For history and culture buffs, the district is home to Plymouth Rock, The Kennedy summer compound, Provincetown, and the fictional airport set from the television sitcom Wings. (Remember Joe, Brian, Helen, Roy and Lowell?)

Two things draw my attention to this District. The first, as a matter of disclosure, is that I spend some time in the district (on Cape) during the summers, and am here right now. The second is that the Scott Brown special Senate election this past January provides us a set of electoral data points intervening between the 2008 election and the upcoming 2010 midterm.

Best I can tell, the MA board of elections did not aggregate votes in the Brown-Martha Coakley race by congressional district. But DavidNYC of Swing State Project produced a colorful, town-level map of the Brown-Coakley results, and one of his plucky bloggers, “jeffmd,” a reliable person I’ve gotten to know a bit offline who has previously appeared here at 538, did everyone a further solid by aggregating the results by CD. 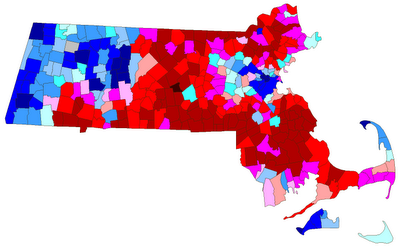 As you can see from the map above, Brown basically carried every part of the district except for the sparsely-populated towns at the tip of the outer Cape (Truro, Provincetown), and the islands of Martha’s Vineyard and Nantucket…and simply crushed Coakley in the working-class towns of the South Shore. And as you can see from the district-wide results, for the towns wholly included in districts, Brown performed better in the 10th than any of the other nine districts, with an estimated 60 percent of the vote. I have to say “estimated” here only because, as I gather from jeffmd’s table, where towns are split across two districts he was unable to separate out the precincts; nevertheless, you can see that those few towns split between the 9th and 10th districts were also Brown’s best performing split-towns statewide, too. In any case, it’s safe to say the 10th was definitely among Brown’s top two best-performing House districts, and probably his overall best. In sum, although Delahunt of late carried MA-10 with about two-thirds of the vote (when challenged), Republicans have reason to be very bullish about this seat: Delahunt’s gone, Obama squeezed by, and Brown crushed Coakley here.

The Massachusetts primary is not until September 14, when one of the two declared Democrats and one of the three Republicans will be chosen for the general. So the candidate dynamics of this race still have not come completely into focus, and the ratings may change as a result of those primaries and the quality of the two nominees who emerge. I’ll check back in on MA-10 after we know their identities.