Not to pick on our neighbors to the North — especially after the whoopin’ the Americans gave them in hockey tonight — but the host nation is starting to have a very disappointing Olympic Games. After having explicitly adopted a goal — through its “Own the Podium” program — to come away with the most medals from Vancouver, Canada instead has won just 9 so far, some 13 fewer than the United States. According to the latest consensus projections, they now project to finish with 26-27 overall, a healthy count which would beat the 24 medals they won in Torino, but which will likely place them third behind the United States (which projects into the low 30s) and Germany.

Canada was supposed to have 15-16 medals by this point, according to the consensus forecast, rather than 9; where have they underperformed? Actually, their problems have been somewhat across the board, but the performance of their speed skating team — which has won 3 medals but was supposed to have won 5 or 6 to this point — has been the most disappointing. 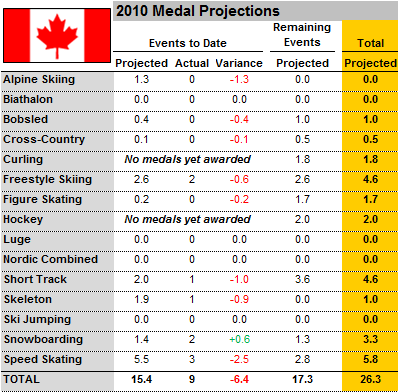 This may merely reflect some bad luck, rather than any failure of the Own the Podium strategy. Still, it’s interesting to look at where Canada has spent its money versus the number of medals at stake in each sport. 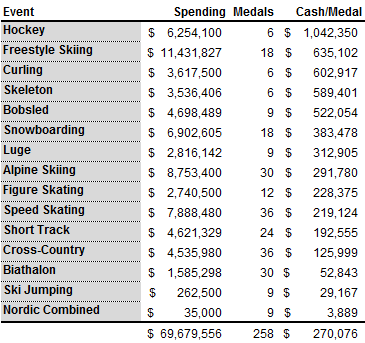 One thing that’s interesting is Canada’s failure to invest substantially in cross-country, biathlon, or nordic combined (ski jumping + cross-country), which themselves account for almost 30 percent of the medals awarded at the Winter Games. Canada has spent 50 percent less on these sports than on hockey and curling, which are of enormous cultural significance to Canadians but which account for just 5 percent of the medals. If I were developing an Own the Podium type of program, biathlon in particular is one of the first sports that I’d target, as it’s rather obscure although it does have a professional tour. On the other hand, some of Own the Podium’s decisions would seem smart, such as investing substantially in freestyle skiing and the sliding sports (luge, skeleton, bobsled), which are also relatively obscure and not terribly well professionalized. Still, there isn’t nearly as much to pick from among the winter sports as there is among the summer one. China, which launched a similar program in advance of the 2008 Olympics in Beijing, picked up lots of medals in extremely obscure sports like synchronized diving, badminton, judo, weightlifting, and shooting.