You’re a contestant on the hit new game show, “You Bet Your Fife.” On the show, a random real number (i.e., decimals are allowed) is chosen between 0 and 100. Your job is to guess a value that is less than this randomly chosen number. Your reward for winning is a novelty fife that is valued precisely at your guess. For example, if the number is 75 and you guess 5, you’d win a $5 fife, but if you’d guessed 60, you’d win a $60 fife. Meanwhile, a guess of 80 would win you nothing.

What number should you guess to maximize the average value of your fifing winnings?

In a world of sudokus, KenKens and kakuros, Barbara Yew offers a different sort of number puzzle: 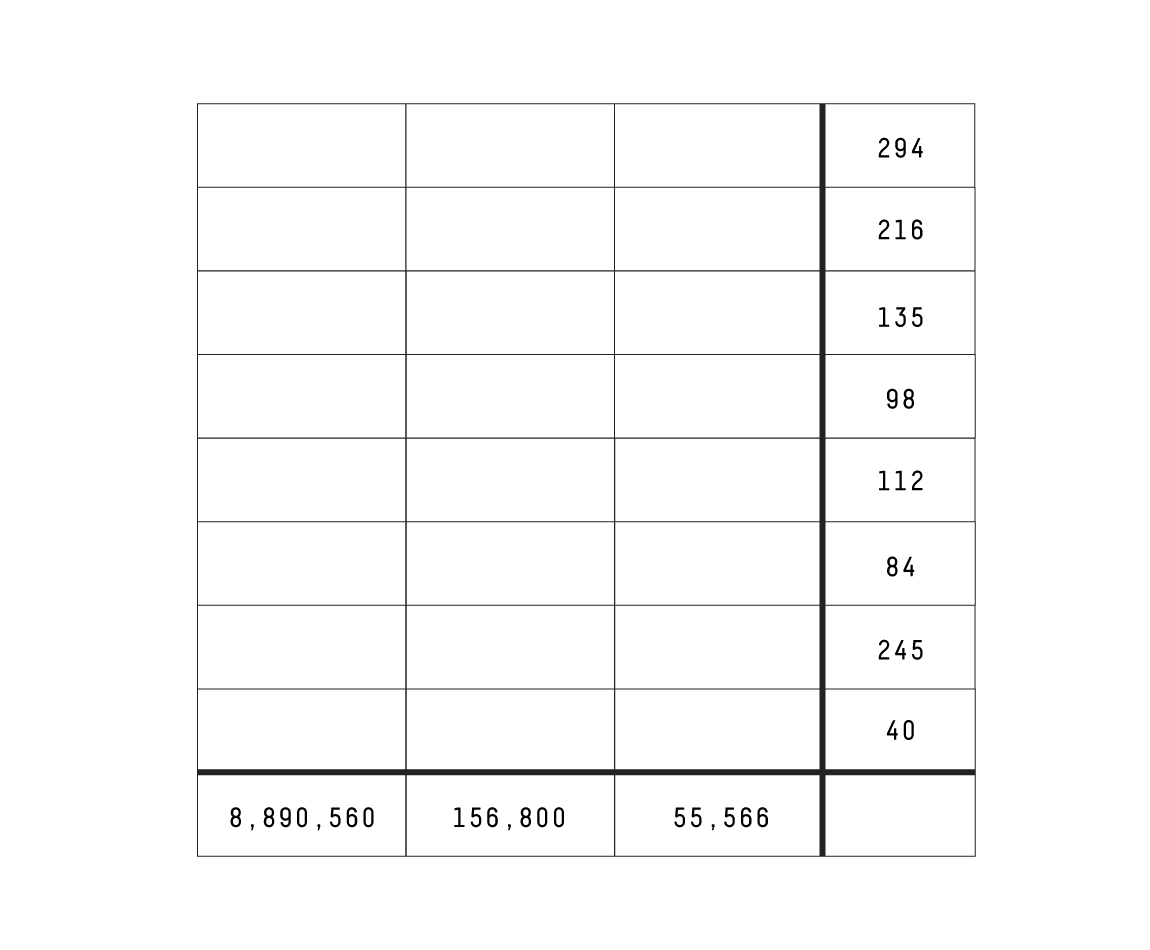 Can you find all eight three-digit numbers and complete the table? It’s a bit of a mystery, but I’m sure you have it within you to hunt down the answer!

What whole numbers of squares could you not have sliced the big square into?

Many solvers began by trying out small numbers of squares. Of course, it was possible to slice the big square into one square by simply leaving it alone. The next smallest number of squares you could get was 4, each a quarter of the big square. That meant getting either two squares or three squares was impossible. (A rigorous proof of this is left as an exercise for you, the reader — hah!)

Another possible number was 9, since that would be a 3-by-3 array of equally sized squares. Similarly, any square number was possible. But what about numbers between the perfect squares?

As noted by solver America Masaros, if it was possible to create N squares, it was also possible to create N+3 squares by taking any undivided square and slicing it into four equally sized squares. This effectively replaced one square with four new squares — a net gain of three squares. That meant any number that was 4 or 9 plus a multiple of 3 (i.e., of the form 4+3k or 9+3k, where k is a whole number) was also possible, ruling out a whole bunch of numbers.

But there were still a few numbers less than 9 that had to be checked: 5, 6 and 8 (7 was 3 more than 4, so it was possible). While 5 was not possible (again, you are welcome to prove this!), both 6 and 8 were possible using unequally sized squares, as shown below:

Indeed, this strategy with one larger square and an elbow of smaller squares around it worked for any even number greater than 2.

Finally, since 8 was possible, any number that was a multiple of 3 greater than 8 was also possible, again by picking one of the squares and slicing it into four equal squares. That meant the only numbers that were not possible were 2, 3 and 5.

Meanwhile, Vince Vatter (of Battle for Riddler Nation fame) recognized this problem from one of his colleague’s books:2

It remains unclear why a value of 14 was chosen for this exercise, rather than the actual lower bound of 5.

At least one solver extended the puzzle further, looking at how a cube could be partitioned into smaller cubes. But let’s save that for a future riddle!

Last week, Robin of Foxley entered the FiveThirtyEight archery tournament. She was guaranteed to hit the circular target, which had no subdivisions — it was just one big circle. However, her arrows were equally likely to hit each location within the target.

On average, what score could Robin have expected to achieve in this archery challenge?

First off, a surprising and subtle fact about this riddle was that the geometry (in this case, a circle) didn’t matter. What did matter was how close each arrow was to the center relative to the other arrows. That meant the target could have been a square, a line segment or even a sphere — the answer would be the same.

A good first step was then to restate the problem and forget about the geometry: If you pick random values between 0 and 1 uniformly — each representing the relative distance of an arrow to the center — how many consecutive decreasing values would you expect (plus one, for the arrow that broke the streak)?

Solver Balthazar Potet approached this by thinking about the values for the first N arrows Robin fired and the probability they’d result in a score of N. With any N values, there were N! ways to order them. For Robin to have a score of N, the smallest value couldn’t have been in the Nth position, since it had to be greater than the previous value. And when each of the other N−1 values occurred in the Nth position, there was exactly one way to order the remaining values so that they formed a decreasing sequence. So of the N! orderings, N−1 resulted in a score of N, meaning the probability was (N−1)/N!

For extra credit, you had to calculate Robin’s average score when the target had 10 concentric circles, whose radii were 1, 2, 3, etc., all the way up to 10 (the radius of the entire target). This time, Robin had to fire as many arrows as she could, such that each arrow fell within a smaller concentric circle than the previous arrow.

Here, the geometry of the target was relevant, since there was now a nonzero probability that consecutive arrows could fall within the same ring. The chances that any given arrow landed in one of the rings (from the smallest ring to the largest) were 1 percent, 3 percent, 5 percent, 7 percent, 9 percent, 11 percent, 13 percent, 15 percent, 17 percent and 19 percent.

Having the discrete rings (perhaps counterintuitively) made the problem more complex, but several solvers persisted. Emma Knight was able to set up and solve a system of 10 equations, finding that the average number of arrows was approximately 2.5585. Josh Silverman was further able to come up with a closed formula for the solution and a precise rational result.

Meanwhile, solvers like Paulina Leperi and Angelos Tzelepis (whose results are shown below) approximated the answer by simulating many arrows.

That was the answer when there were 10 rings. As the number of rings increased, the average score also increased, approaching e in the limit of infinitely many rings.

By now, I bet you’re curious how Robin of Foxley actually performed at Marian’s archery challenge. Robin was such a good archer that she was able to fire off two arrows that were exactly the same distance from the target’s center. Marian’s mind was blown by this probability-zero event, and they lived happily ever after.