The most realistic shot for the “Conference of Champions” to break its College Football Playoff drought rests on the shoulders of one of its newest and most unproven members. It falls on a coach who traditionally oversees .500 ball once the regular season passes the midway point and on a quarterback whose last two seasons have been derailed by upper-body injuries.

And with the Pac-12 Conference’s preeminent powers having already lost, Utah is perhaps the last team standing between the conference and a third consecutive season of missing the playoff.

But contrary to what the school’s trophy case might indicate, Utah is now more than just a powerhouse on the slopes. The Utes’ football team has made a convincing case to be taken seriously so far this season: They have three wins, with each decided by at least three possessions.1 Kyle Whittingham’s 15th full season at the helm in Salt Lake City opened with unprecedented expectations: They were ranked in the preseason top 15 for the first time, picked by the media and oddsmakers to win the Pac-12 and even deemed a national title contender by the lovably eccentric Lee Corso. And the prognostications were for good reason, too: Utah returns more than half of its starters on each side of the ball and features arguably the best defensive line in the nation. As Stanford coach David Shaw candidly put it at Pac-12 Football Media Day, “I think it’s great they’re not on the schedule for us this year.”

The program’s trajectory has reached an inflection point in recent years. From 1950 through 2013, Utah managed to crack the Associated Press Top 25 poll in just seven seasons. This year marks the sixth consecutive that the Utes have barreled into the top 20.

Since joining the Pac-12 eight years ago, the Utes have finished each season with a defense more efficient than its offense.2 The team’s average defensive efficiency over that time (73.3) grades out as tops among all defenses in the conference, while its offense (46.9) grades out as the second worst. This season, the two are within 2 points of each other, as the Utes feature a smashmouth offense that has vaulted the program onto the national scene. 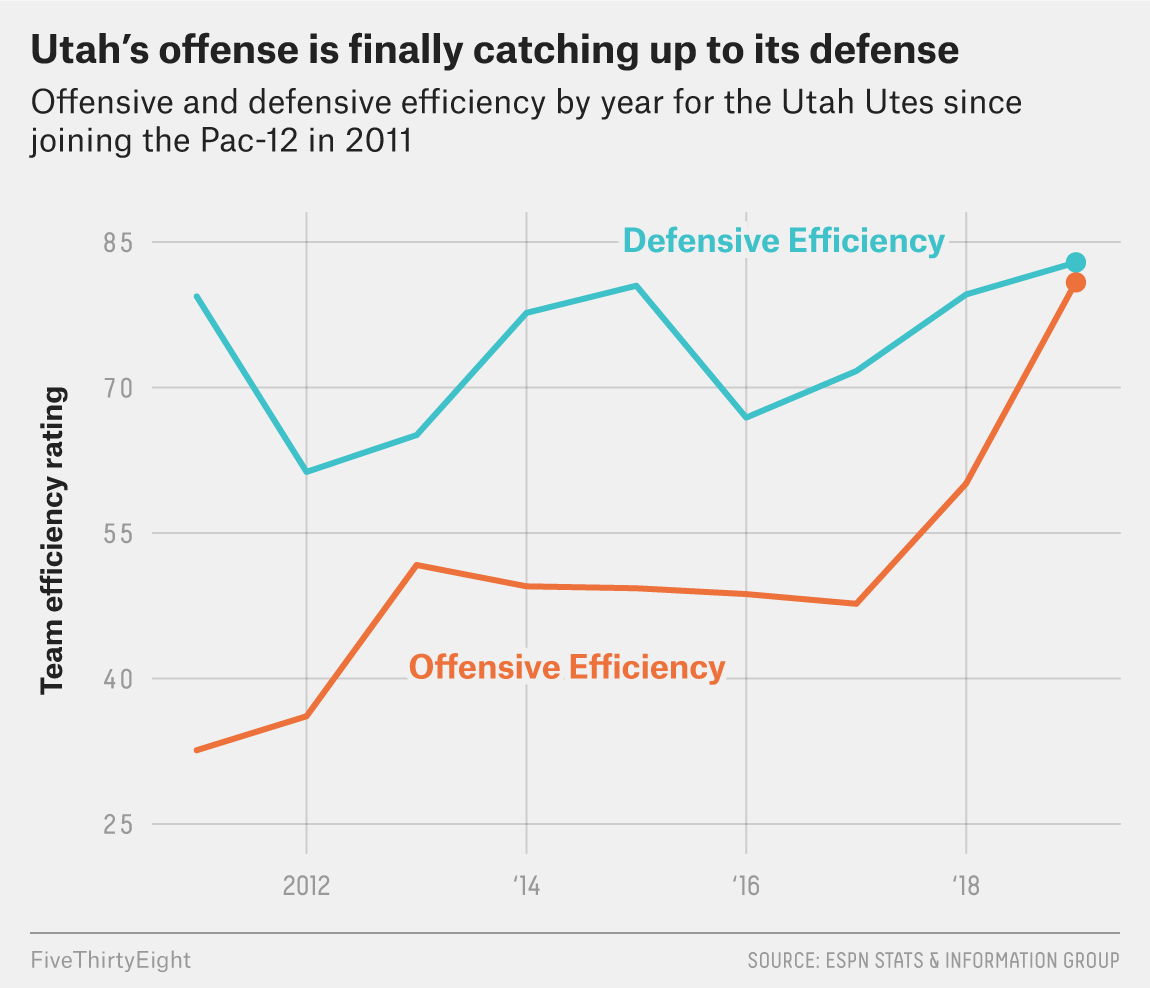 In a conference marketed by speed and governed by spread offensive principles, Utah has been as deliberate as it gets. That’s the work of offensive coordinator and quarterbacks coach Andy Ludwig, who returned to Salt Lake City this offseason after previously serving in the former role from 2005 to 2008.3 Like many coordinators, Ludwig adapts his system to the personnel on hand. This season, that flexibility has arguably produced the kind of offense that, according to Utah backup quarterback Jason Shelley, will “smash you right in the face.”

Last season, Utah huddled on just 60.7 percent of snaps. Two seasons ago, only 27.5 percent of offensive plays involved that traditional gathering. But this year, Ludwig has the Utes huddling before 98.4 percent of plays, a rate outpaced by only a handful of teams. The Pac-12 averages a huddle rate of 52.2 percent, with six teams opting to huddle on less than 40 percent of snaps. In turn, Utah has gone almost entirely under center. While Arizona, Oregon and Washington State have used just two under-center snaps this season combined, Utah has racked up 78. By average time of possession per play and per drive, this is easily Utah’s slowest offensive cadence in at least 15 years — and it’s on pace to be the slowest Pac-12 offense over that same stretch.

And it’s working. Since 2005, only once has Utah had a more efficient start to the season offensively. Trailing only Mike Leach’s perennially magnificent Air Raid at Washington State, Ludwig oversees the conference’s second-best offense, which ranks in the top 25 nationally in expected points added on passes a season after it finished 96th. If maintained, the Utes’ 2.59 points per drive would be their best mark since 2008, when they went undefeated.

Starting quarterback Tyler Huntley reportedly spent the offseason packing on 25 pounds. Armed with a new physique, the senior leads the country in adjusted completion percentage (90), ranks fifth in yards per pass attempt (11.2) and is 12th in QBR (85.4). He hasn’t thrown an interception or been sacked.4 He has help in the backfield from Zack Moss, who is coming off consecutive 1,000-yard campaigns. Moss has accumulated more yards after first contact this season than all but two players in college football and will likely leave as the school’s all-time leading rusher.

These team performances have come via an abridged playbook. “Ludwig has done a very good job of just keeping things really basic,” Moss said after the Utes thrashed Idaho State. “We’ve just been running the first couple installs we did going into this year. If you can win with your basic stuff, that’s really good for your offense.”

Friday’s matchup at USC presents an opportunity for the Utes to allay fears that the moment will grow too big for them. It would mark a historic victory for Utah, which hasn’t beaten the Trojans in Los Angeles since 1916 (though in only nine attempts). Since arriving in the Pac-12 in 2011, Utah has never shown the flash of Oregon or the imagination of Washington State. It has even found itself in the shadow of Stanford, another program that bucks conference norms behind a conservative, play clock-drowning style. So it’s fitting that Utah, a program conventionally known for a stout defensive front, is gunning for contention behind an old face and a new offensive blueprint.