Ohio is the type of Senate race that Democrats shouldn’t have much business competing in. The state is increasingly red, having voted for former President Donald Trump by 8 percentage points in 2020. True, Democratic Sen. Sherrod Brown was reelected in Ohio in 2018 — but that was in a strongly Democratic environment that is unlikely to be replicated this November, in what’s expected to be a Republican-leaning year.

And yet, Democratic Rep. Tim Ryan had led in five consecutive polls since late July until an Emerson College poll this week put J.D. Vance — the Trump-endorsed venture capitalist and author of “Hillbilly Elegy” — ahead. Ryan still holds a narrow 1-point lead in our polling average. 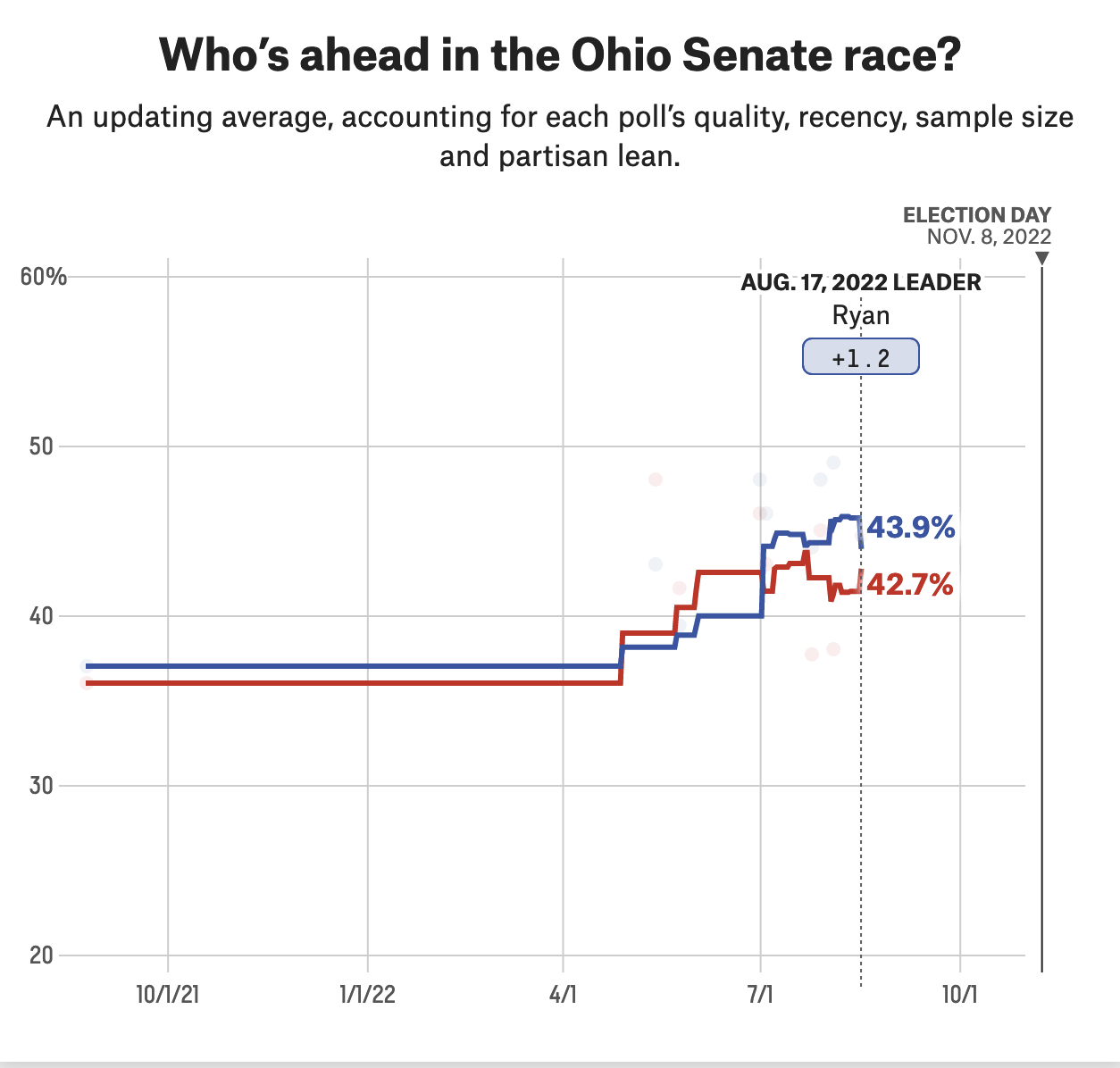 Our election forecast is … confused. The Lite version of our forecast, which just uses the polls, sticks to our polling average and has Ryan as a slight 56 percent favorite.1 The Classic version, which incorporates “fundamentals” such as Ohio’s Republican lean and Ryan’s fundraising advantage so far, puts Ryan’s chances at 39 percent and Vance as a slight favorite. And the Deluxe forecast, which also accounts for expert race ratings — in essence, the conventional wisdom that the race is an uphill climb for Democrats — has Ryan’s chances at 21 percent, making Vance a clear favorite.

I’ll save the value of expert ratings and the differences between the Classic and Deluxe versions of the forecast for another time. But suffice it to say that they do add to our forecast’s accuracy — or at least they’re supposed to. So there’s no need to, say, blend the Classic and Deluxe forecasts together; the Deluxe forecast should be the one you’d bet on. It already puts the “right” amount of weight on the expert ratings, based on what would have produced the best forecasts empirically.

Still, even a 21 percent chance isn’t nothing. So let’s step back and ask a more basic question: Is it plausible that Ryan could win in a state like Ohio in a political environment like the one we’re likely to see in November?

Ohio is 12.4 points more Republican than the country as a whole, based on FiveThirtyEight’s partisan lean metric, which is derived from the past two presidential elections and recent state legislative elections.2 And it’s not as though Ohio just had a special thing for Trump, either; lately, it’s been GOP across the board, except for Brown. All of its statewide elected officeholders are Republicans, and both the state House and Senate are strongly Republican. 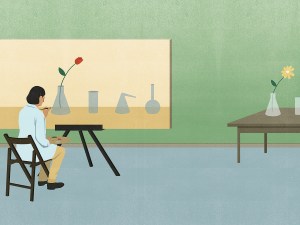 To better understand the odds Ryan faces, we can create what I call a “simple fundamentals” forecast by adding a state’s partisan lean to the generic congressional ballot’s margin, or the margin by which one of the two parties is winning the race for Congress. (This differs from the more complicated fundamentals formula that our forecast uses, but it still serves as a good sanity check.) And if we add Ohio’s 12.4-point Republican lean to Democrats’ 0.5-point lead on the generic ballot, the simple fundamentals forecast predicts that Vance will win by 11.9 points.3

But of course, the political climate may not look like this by November. Our forecast, for instance, still thinks it’s more likely than not that the political environment ends up being somewhat Republican leaning. And if, say, the environment winds up favoring the GOP by 3 points, the simple fundamentals forecast would predict Vance wins by around 15 points.

This raises the question of whether there are recent examples of a Senate candidate outperforming the simple fundamentals forecast by 15 points? Or for that matter — let’s say the political climate remains pretty decent for Democrats — even 10 or 12 points?

The short answer is: Yes. But 10 points versus 15 points makes a pretty big difference.

Let’s go back to the last midterm in 2018. Here’s what a simple fundamentals forecast would have shown in each Senate race (excluding a handful of unconventional races)4 based on FiveThirtyEight’s partisan lean as we calculated it at the time, and the generic ballot, which favored Democrats by 8.6 points that year. (Conveniently, the generic ballot was very accurate that year: Democrats also won the House popular vote by 8.6 points.)

In other words, what we can learn from the 2018 midterms is that even in this era of high partisanship, meaningful divergences from the simple fundamentals aren’t that uncommon in midterm years. With that said, they aren’t routine either, and they usually require something a little bit different to be going on.

Being an extremely popular incumbent is one way a candidate can overperform the fundamentals, but that doesn’t apply to Ryan. And for what it’s worth, while his margin of victory in his House district was quite spectacular in 2016 — 36 points, in a district that Democratic presidential nominee Hillary Clinton won by just under 7 points that year — it was less spectacular in 2020, when he drew a more competitive challenger and won by about 8 in a district that President Biden won by 3 points.

Moderate candidates also sometimes outperform the fundamentals, as Manchin and Heitkamp did in 2018, whereas right- or left-wing candidates can underperform them, as in the case of Warren. Does that apply in Ohio? Maybe, but it’s a little bit of a stretch. Ryan’s website brands him as a “post-partisan populist,” but he’s no Manchin. Instead, he has a fairly typical Democratic voting record — he’s voted with Biden 100 percent of the time in this current Congress, for instance.

Then again, Ryan’s current advantage in Ohio may have less to do with him and more to do with Vance. Inexperienced candidates tend to underperform in Senate races, and Vance has never run for office before.

Ryan might also have some success in portraying Vance as being too far to the right — Vance previously supported cutting Social Security and Medicare — and Ohio has a history of preferring relatively moderate Republicans, such as outgoing Sen. Rob Portman and former Gov. John Kasich. However, in Vance’s case, perhaps it’s safer to say that his views have been all over the place as he was willing to change course to win Trump’s endorsement.

Finally, another way to underperform the fundamentals is to be tinged by scandal, as Menendez was in 2018 (although the corruption case against him ended in a mistrial). But there’s nothing comparable in Vance’s case.

With that said, there’s nothing that says you need “one neat trick” to win a Senate race. You can grab a little bit from different buckets. Maybe Ryan isn’t Manchin, but maybe he succeeds in presenting himself as a populist moderate, outperforming a generic Democrat by a few percentage points. Maybe Vance’s inexperience makes him easier to define, and Ryan can characterize him as the worst of both worlds: too much of a sell-out to Trump for Kasich-voting moderates in the suburbs and too much of a sell-out to Wall Street for blue-collar voters in the exurbs. Ohio is red, but it isn’t Mississippi or Wyoming. It isn’t that high a hurdle to overcome.

So there are two things I think we can be certain about. First, this will be much easier for Ryan to pull off if the political climate in November winds up favoring Democrats by a couple of points rather than favoring Republicans instead. Yes, it’s a small sample size, but there were plenty of candidates in 2018 who beat the “simple fundamentals” by 10 points; only Manchin did so by more than 15 points, however. Second, Ryan would be much better off if the election was held today instead of in November.

It’s not that I don’t necessarily believe the polls now, although it’s certainly worth mentioning that Ohio is in a part of the country where the polls have done quite poorly in recent elections. Biden trailed Trump by only 1 point in FiveThirtyEight’s Ohio polling average, for instance, but lost the state by 8 points.

But even if I were convinced that pollsters have fixed their problems in the Midwest, there are a couple of things that would make me nervous as a Democrat. One is the relatively high number of undecided voters in the race. In our polling average, Ryan has 43.9 percent and Vance has 42.7 percent, meaning that 13.4 percent of voters are not committed to either candidate. That’s on the high side at this stage for a Senate race. It may reflect the fact that Vance is not a terribly familiar name, but Republican voters in Ohio may not care once they see the “R” beside it.

This relatively narrow polling advantage for Ryan is also coming at a time when Ryan is using his fundraising advantage to dominate the airwaves. Reinforcements are coming for Vance, though, so Ryan might lose that advantage by November.