Last year, the Denver Broncos had one of the greatest passing offenses in NFL history. Peyton Manning set an NFL single-season record for touchdown passes and passing yards, and the Broncos became the first team to score 600 points in a season. Likewise, the 2013 Seattle Seahawks pass defense was one of the best of all time. (The Broncos can attest to that.)

The only thing more incredible than their performances last year would be if the Broncos and Seahawks were to do it again. Excellence can only last so long, and by their very nature, historically dominant performances are difficult to match. Regression to the mean tells us that seasons of total dominance are usually followed by significant drop-offs in production. Just ask Peyton Manning. After a historic 2004 season in which he threw 49 touchdown passes and recorded a 121.1 passer rating, Manning threw “just” 28 touchdowns and produced a passer rating of “only” 104.1 in 2005.

While there’s no guarantee that’ll happen again, after looking at the numbers and offseason changes, it looks like the Seahawks’ pass defense is more likely than the Broncos’ offense to come closer to repeating last year’s performance.

Let’s start by putting into context just how good those two units were last season.

Since 1970, there have only been three teams1 with better passing offenses than the 2013 Broncos, judging by adjusted net yards per attempt (ANY/A) and number of dropbacks.2 Below I’ve listed the top 15 offenses since 1970 in ANY/A on a per-game basis3 relative to league average that year. 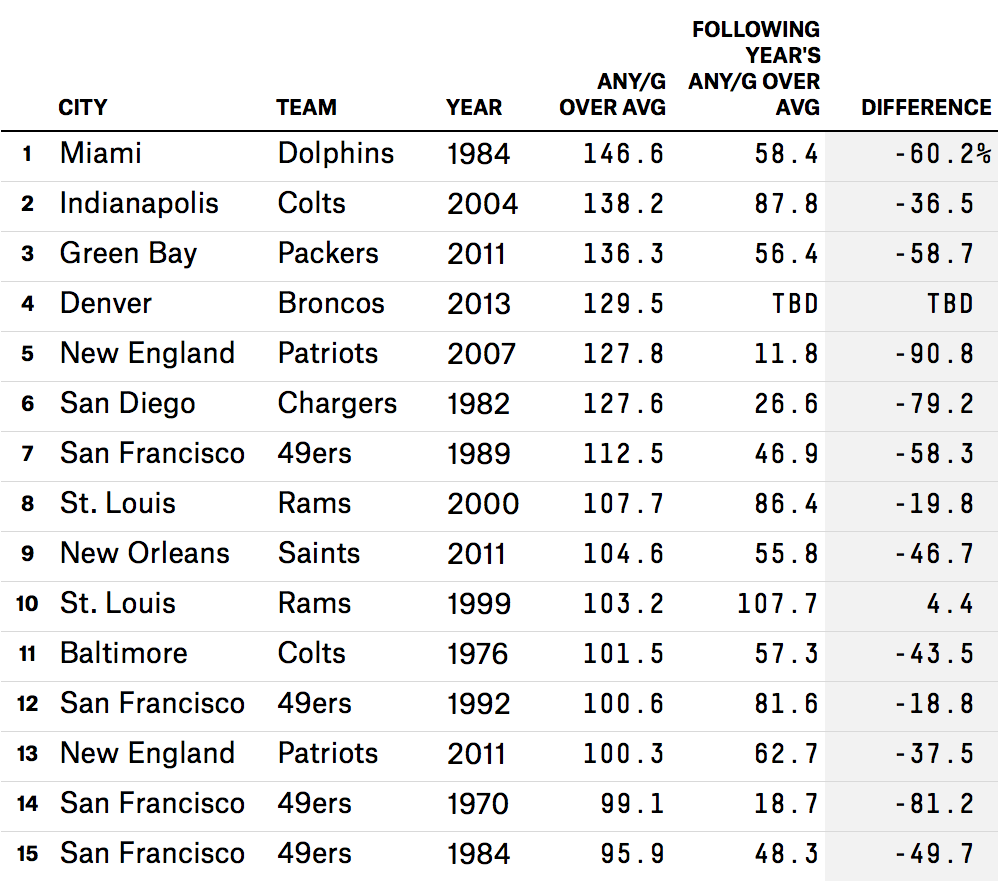 The Broncos averaged 8.77 ANY/A last year, a remarkable 2.98 ANY/A better than the league average rate (the San Diego Chargers were second at 7.79). Over 695 dropbacks, Denver created 2,072 adjusted net yards more than the average team in 2013.

The Seahawks, on the other hand, allowed just 3.19 ANY/A last year; the No. 2 pass defense, the Cincinnati Bengals, allowed 4.39 ANY/A to opposoving passers. As a result, the Seahawks allowed 99 fewer adjusted net yards per game than the average defense last year. That’s the the fourth-best defensive average since 1970.4 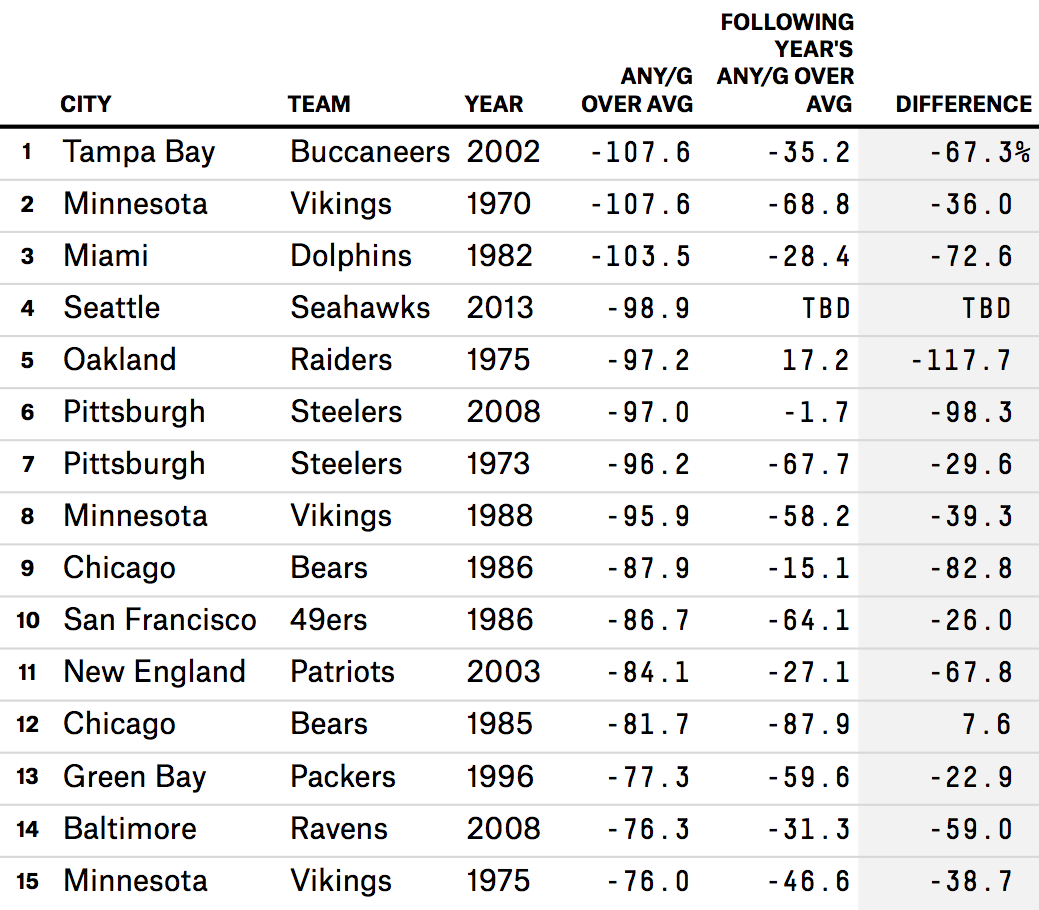 Those two tables above depict the power of regression to the mean. The all-time great pass offenses and pass defenses both lost, on average, about half their value in the following season.

But there’s still the matter of which team’s unit will regress more. As a general rule, elite offenses are further from league average than great defenses, so offensive regression isn’t as likely as defensive regression. It helps, too, that research has shown offenses to be more consistent from year to year than defenses. All else being equal, we would expect the Broncos to be the more likely team to repeat last year’s brilliant performance.

But all else isn’t equal. Denver produced 2013’s record-breaking numbers while playing defenses from the AFC South and the NFC East; those will be replaced this year by the AFC East and the NFC West, divisions that present much more formidable challenges. That’s a significant change.

According to Football Outsiders, Denver played the third-easiest slate of opposing defenses in 2013. Based purely on adjusted net yards per attempt, the average defense Manning faced last year was 0.44 ANY/A below average, and that’s after adjusting those defenses’ ratings for the fact that they played Manning. Only Alex Smith and Robert Griffin III faced more cupcakes. Last year, Manning didn’t Omaha against a single defense that ranked in the top eight in strength-of-schedule ANY/A; this year, he’s set to face six opponents that ranked in the top eight in that metric in 2013.

The Seahawks faced essentially a league-average slate of passers last year. For Seattle, the AFC West and the NFC East are replacing the AFC South and the NFC South; that means one game each against Eli Manning, Griffin and Matt Schaub — quarterbacks who struggled significantly in 2013 — along with the usual four against Carson Palmer and Sam Bradford, or whoever is taking snaps for Arizona and St. Louis when those quarterbacks are injured.

The Broncos are also a much older unit than the Seahawks, something that may hasten their slide. Some of the best 37-year-old quarterbacks in NFL history — what Manning was in 2013 — had very different fates a year later. Steve Young suffered a career-ending concussion at age 38; that’s also the age at which Rich Gannon followed up an MVP performance with one of the worst seasons of his career. Y.A. Tittle was the league’s Most Valuable Player at age 37, too, but then had the worst year of his career the next season.

Manning set a record by throwing 789 passes last year (in the regular and postseason combined), and while the impact of “arm fatigue” has not been well studied, there is some evidence to indicate that there are side effects to throwing so many passes. And it’s not just Manning that Broncos fans need to worry about: Wide receiver Wes Welker is now 33 and suffered two concussions in four weeks last year. Given his age and the league’s heightened sensitivity to head trauma, Welker is at a higher risk than most star receivers of missing time in 2014.

Youth is clearly on Seattle’s side. Richard Sherman, Kam Chancellor, Earl Thomas, Byron Maxwell, Bobby Wagner, K.J. Wright, Bruce Irvin and Super Bowl MVP Malcolm Smith are all 26 or younger. The starters on the defensive line are either 28 (Michael Bennett and Cliff Avril) or 29 (Brandon Mebane and Tony McDaniel); that may be a concern for 2015 and 2016, but all four players are in their prime right now.

Neither team exited the off-season unscathed: Unsurprisingly, the rest of the league wanted a piece of Denver’s passing game and Seattle’s pass defense, too. Denver’s biggest losses were wide receiver Eric Decker and running back Knowshon Moreno, but the Broncos retooled with the additions of wide receiver Emmanuel Sanders (from the Pittsburgh Steelers) and are expecting more out of their 2013 second-round draft pick, running back Montee Ball. Seattle lost several role players on defense, notably defensive lineman Red Bryant and cornerback Walter Thurmond, but those aren’t reasons enough to downgrade the defense. The Seahawks signed Kevin Williams from the Minnesota Vikings to help out on the line, and have in-house solutions at cornerback with Byron Maxwell and Tharold Simon, the latter of whom has already returned an interception 105 yards for a touchdown in the preseason.5

Taking in all those factors, both units still project to be at the top of the league again this year. But based on what I’m seeing in the data, the Seahawks are more likely to actually get there.