Roger Federer holds a record 17 Grand Slam titles, but there’s one trophy he’s still itching to lift: the Davis Cup. Starting Friday, he gets his best chance yet. In his first Davis Cup final, the 33-year-old ace and his Swiss teammates will battle the French in Lille, France.

Yes, playing away from home significantly diminishes the win probability for the Swiss. And because Davis Cup rules dictate that the host country gets to choose the playing surface, Federer will be forced to compete on clay, his least favorite type of court — without much practice, after a back problem kept him sidelined until a short session Wednesday.

But the good news for Federer is that Lille is a  lot closer to home than Melbourne, where he lost to the Australians in 2003, the only other time he made a Cup semifinal. Plus, Switzerland is one of a handful of major teams to maintain a winning Cup road record since the modern era began in 1972.

Of course, the second-ranked Federer is simply better most days than any of his Lille opponents. (France is led by No. 12 Jo-Wilfried Tsonga.) And he’s so popular globally that he takes home-court advantage with him when he travels. Consider Roland Garros. “When he plays a French player,” says France’s Gilles Simon, “[the crowd] is 50-50, and I’m like, ‘Guys, what’s going on?’ ”

The Swiss aren’t likely to feel that much love in Lille. But they still have plenty on their side to get the job done. Here’s a closer look at the factors in their favor.

Federer’s 37–7 Davis Cup singles record is even more impressive when you consider that he’s been even better on the road than at home—especially in Europe, where he’s won his past 15 matches.

The farther Cup teams have to travel, the worse they perform (though traveling between 501 and 1,000 miles seems particularly tough). Luckily for Roger & Co.: Lille is just 325 miles from the Swiss capital of Bern, minimizing the French advantage. 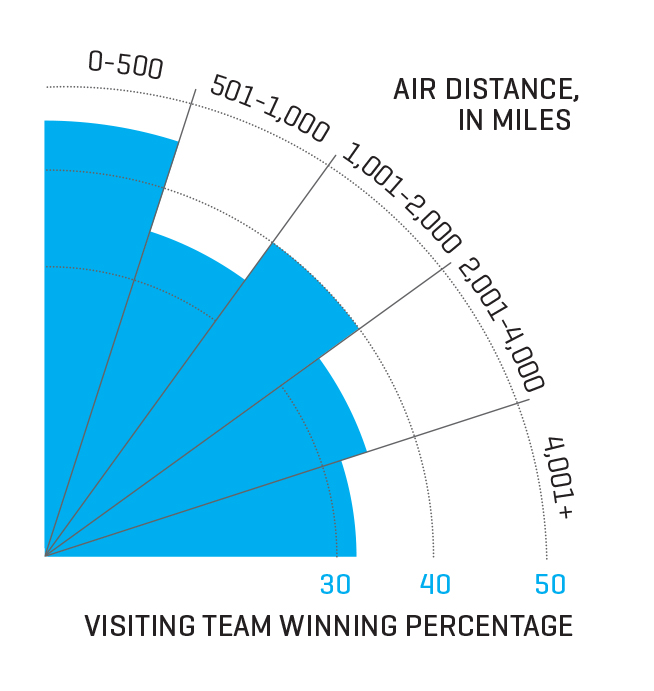 Andrew Flowers contributed to the analysis of data supplied by the International Tennis Federation. This story appears in ESPN The Magazine’s Nov. 24 The State of Football Issue.