Last night, Barack Obama clinched a majority of pledged delegates excluding Florida and Michigan, as well as under certain Florida/Michigan scenarios. But, in spite of a big win in Oregon and a well-executed speech in Iowa, the milestone did not quite produce the sense of euphoria and closure that his campaign might have been after. The circumstances of the day — Hillary Clinton’s overwhelming margin of victory in Kentucky, the late hour at which Oregon ballot boxes closed, the subdued tone of the evening necessitated by Senator Kennedy’s diagnosis, and some relatively effective pushback from the Clinton campaign on the pledged delegate metric — conspired to prevent that.

Obama might have another opportunity to declare victory on June 3rd, when South Dakota and Montana conclude the primary calendar. The conditions for doing so are otherwise pretty favorable. He is likely to achieve victory in one or both of these states (his worst case scenario is probably losing one of them — more likely South Dakota — by a small margin). And while Obama could conceivably hold a victory rally anywhere, there is a sound argument for doing so in Montana, a potentially competitive state that symbolizes the Democrats’ 50-state strategy (think Brian Schweitzer and Jon Tester) and their hopes to expand the electoral map in November. But will the math be there to make Montana the state that puts Obama over the top?

It depends, of course, on what happens to Florida and Michigan at the Rules & Bylaws Committee meeting on May 31st. But the good news for Obama is that something will happen at the Rules & Bylaws meeting, meaning that the Clinton campaign can no longer use those states as a smokescreen to deny Obama a sense of victory.

Some scenarios, of course, will make it easier for Obama to declare victory than others. But let’s boil it down to just three possibilities:

In cases (ii) and (iii), we’ll assume that the seating is based on the results of the January primaries, but that Obama will receive all of Michigan’s uncommitted delegates.

Following are the key metrics under each of the three scenarios: 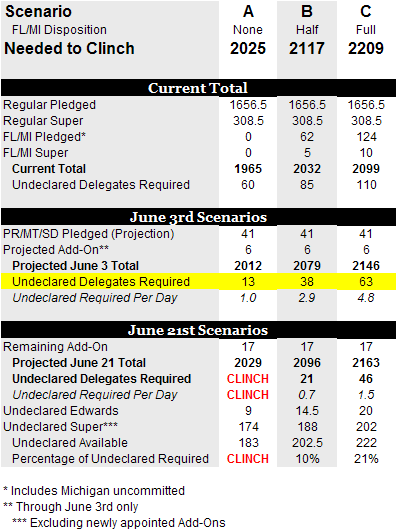 Lots of numbers there, but I’m trying to draw your attention to the line in yellow:

(i) If Florida and Michigan are not seated, Obama will need only about 13 superdelegates and Edwards delegates to commit to him between now and Montana to clinch the nomination on that date. He will almost certainly achieve this, even if he underperforms in Puerto Rico. All he’d need is to roll out one superdelegate per day between now and Montana.

(ii) If Florida and Michigan are seated as half-delegations — very probably the most likely scenario — Obama will need about 38 commitments between now and the 3rd to secure the nomination (though he’d probably want to aim for more like 40-45 to play it safe). This would require about three new commitments each day. Although the Obama superdelegate bandwagon has slowed down just a bit lately, this would seem to be within reach.

(iii) If Florida and Michigan are seated fully — essentially, how the Clinton campaign wants them to be seated — Obama will need 63 commitments, or about five per day. This is a steeper hill to climb, but might be possible with a sufficient amount of arm-twisting.

The fallback date for Obama is probably June 21st, at which point a half-dozen states hold their conventions and the delegate selection process officially concludes. We expect Obama to win roughly 17 additional add-on delegates between June 3rd and June 21st.

If Florida and Michigan are not seated, Obama has effectively already clinched under this scenario. We have him picking up 41 pledged delegates and 23 add-on delegates between now and the 23rd, or 64 total, slightly more than the 60 he needs even without any further superdelegate endorsements. But even under Clinton’s best-case Michigan/Florida scenario, with the delegations fully seated, Obama will need only 1-2 superdelegate commitments per day to clinch by June 21.

The very last line in the table might be the one to pay the most attention to. If the Florida and Michigan delegations are seated as half-delegates, Obama needs only about 10 percent of the outstanding superdelegates in order to clinch the nomination; Clinton would need 90 percent. If Florida and Michigan are fully seated, Obama needs about 20 percent of the remaining undeclared delegates; Clinton needs roughly 80 percent.

In other words, the Florida/Michigan brouhaha is much ado about nothing. Even if Clinton gets her way with the two states, she’d still need about 80 percent of superdelegate commitments to secure the nomination. Clinton’s arguments about electability and the popular vote might persuade a dozen delegates, or a couple dozen, or perhaps even the majority. It won’t persuade 80 percent. (Or more realistically, the 90 percent she’d need if there is some sort of compromise on Florida and Michigan).

The math is sufficiently impossible for Clinton that one wonders about her motivation in pressing her case so bluntly in Florida today. I am on the record as saying that I don’t believe that Clinton is trying to undermine Obama to set herself up for 2012. I continue to maintain that position. At the same time, this was not about Clinton whistlestopping her way through the steppes of South Dakota. It was about her going into a critical swing state and literally trying to upstage Obama while undercutting his claim of legitimacy to the notation.

What’s particularly puzzling about Clinton’s actions is that there are 222 undeclared delegates in play, versus a difference of 54 pledged delegates between her best-case and worst-case Florida/Michigan scenarios. She might well have done more harm among the former group today than she could hope to gain among the latter. By making her arguments in such an uncouth way, Clinton risks poisoning the waters on any sympathy she might gain on Florida and Michigan, just as she poisoned the waters on her electability arguments with her “hard-working” comments. Rather than hardball politics, it’s a counterproductive and contrarational strategy.

Increasingly, I am beginning to side with Jonathan Chait: we should stop trying to interpret the Clintons’ actions as those of a rational campaign. This is not just about Florida and Michigan. It’s about kindergate and Jesse Jackson and “hard working” and a whole series of actions that were at best politically tone-deaf and at worst almost willfully self-destructive. The story of the Clintons is not that of a campaign that will debase itself in order to win. Rather, it’s one of a campaign whose sense of self-pride had become so swollen as to obscure its path to victory.