Creigh Deeds is bidding to become the third Democrat in a row to win the Virginia governorship. Though he has made progress since mid-summer, he is trailing Republican nominee Bob McDonnell. The growth of suburban Northern Virginia helped Mark Warner and Tim Kaine in 2001 and 2005, respectively. Can recent growth in the Washington-area suburbs boost Deeds, too?

Maybe, but the growth rate of the NoVa counties is not going to be enough. To explain what I mean, let’s first start by comparing the regional performance of those past three Democratic nominees: Don Beyer in 1997, Warner and Kaine. 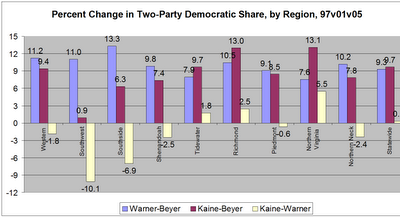 The figure above compares, by region*, the two-party vote shares of the three Dem nominees in all three possible pairwise combinations: Warner relative to Beyer four years earlier; Kaine relative to Beyer eight years earlier; and Kaine relative to Warner four years earlier. Both Warner and Kaine outperformed Beyer’s poor performance in all nine regions of the state: Warner made larger strides in what you might call the more Republican regions of the state (more rural, less-populated and/or further-from-DC); Kaine made larger strides in the more Democratic regions (Northern Virginia, Tidewater, Richmond areas).

The geo-demographic difference in the Warner and Kaine coalitions is apparent when comparing them head-to-head: Kaine’s two-party share was worse than Warner’s in six of the state’s nine regions, yet Kaine not only won but won by a wider margin than Warner because Kaine really pushed up his margins in the big and/or faster-growing Democratic regions of the state, most notably the 10 Northern Virginia jurisdictions (five counties, five independent cities). I have been in a few arguments with Mudcat Saunders, leading advocate of a rural strategy for Democrats and a consultant who claims that Democrats can only win when they appeal broadly to rural, white voters. This chart demonstrates that Mudcat and others like him are wrong: Kaine targeted a more suburban and multi-racial coalition in 2005 and won bigger than Warner did in 2005.

Northern Virginia’s growth still outpaces that of the rest of the state. Looking at final registration statistics from 2005 and the most current data (as of Aug 31) this year, shown in the table below, there has been an 11.6 percent growth in registered voters statewide. Of the three regions where Kaine outperformed Warner, growth since 2005 has outpaced the statewide registration growth in two–Northern Virginia (13.1 percent) and the Richmond area (13.6), while the third (Tidewater, 11.2) grew slower. That’s the good news for Deeds. 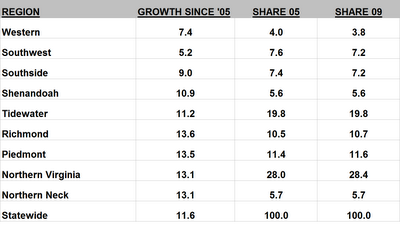 The bad news is that this growth is not as dramatic as might be useful to him. As the last two columns of the table show, NoVa and Richmond have a larger share of registered voters than they did four years ago, but the increases are not that big. In fact, I calculated what the registration changes alone would mean if Deeds got the same share of the two-party vote in each county/city and region this November as Kaine did four years ago. Kaine beat Republican Jerry Kilgore by 113,615 votes; again, using the same county-level two-party splits, Deeds, thanks to the registration gains, would win by 131,146 votes, a net gain of 17,821. That hypothetical increase is more than accounted for by an expected pickup of 132,382 votes from Northern Virginia’s 10 jurisdictions alone.

But let’s keep in mind that the above projections assume that the newly-registered voters in all parts of the state will turn out to vote at the same rates, and then vote the same way, as the people who registered and voted in their respective counties four years ago. This is not merely improbable; it is impossible. What the 17,821 potential net vote gain total tells us is that, all else equal, the registration growth in the respective areas of the state would hypothetically add 17,821 votes to Deeds total (or, perhaps more accurately, Kaine’s total in a re-run of the 2005 race using the 2009 electorate). To put that into fuller context, if we assume an 11.6 percent increase in statewide turnout, given the registration increase since 2005 at that rate, the two-party vote total will jump from 1,938,269 votes in 2005 to 2,242,288 this November. An additional projected net 17,821 votes translates to less than a one-percent increase (.79 to be exact). That’s the net boost Deeds can expect from projected regional-demographic changes in the state over the past four years, holding all all factors other than registration changes constant. It ain’t much to bank on.

Meanwhile, I’m sure many readers have been barking at the screen while reading this post, shouting “How can you account for the registration changes that are attributable to Barack Obama’s 2008 operation, which turned a state that went Republican in every presidential election since 1964 into a comfortable Democratic win in 2008–and thus are not necessarily transferable to Deeds?” Well yes, indeed, this is the big question. Forget the innumerable reasons why 2005 isn’t 2009: Deeds isn’t Kaine, McDonnell isn’t Kilgore, the economy then isn’t the economy now, etc. The big unknown here–and in New Jersey, and for the 2010 midterm races next year–is the degree to which voters delivered by the Obama machine are deliverable to other Democrats.

Frankly, I don’t think Deeds can rely on the projected additional votes from post-2005 registration growth pulling him over the finish line, because so much of that growth was among Virginians who registered in order to vote for Obama–and many of those voters are not going to turnout this November without Obama and the presidential race as a draw. That was true for Kaine, of course, before most of the country outside Illinois could even identify Barack Obama.

I want to tinker around a bit more with the numbers I’ve collected, and look at them in conjunction with recent polling data. But that’s for a future post(s).