Through the first two weeks of the season, holding penalties in the NFL are at an all-time high.1 Perhaps we shouldn’t be surprised. Heading into the 2019 season, the NFL competition committee mandated that referees enforce offensive holding more strictly than they have in the past. The points of emphasis document published by the NFL states that “back-side” holding — action that occurs behind where the ball carrier is running — will be more closely monitored.

A play from the Cleveland Browns’ and the Tennessee Titans’ matchup in Week 1 helps illustrate what the NFL is trying to prevent. The play shown below is a counter run to the left, away from the “strong” side of the offensive line. The idea is to fool the defense into thinking that because there’s an extra blocker to the right,2 you’ll run that direction. To help sell the deception, Cleveland running back Nick Chubb takes a false step toward the right and then quickly cuts across the field in front of the quarterback and heads left, looking for a hole.

Chubb ends up finding some room to run, but only because the majority of his linemen were breaking the rules. While the actions of No. 85 David Njoku best match the description of backside holding, the referee probably could have thrown flags for a number of penalties on this run. There’s an old saying in football that you can call holding on any play, and officials now appear to want to. Refs are calling these fouls at a rate that is unprecedented in recent NFL history. 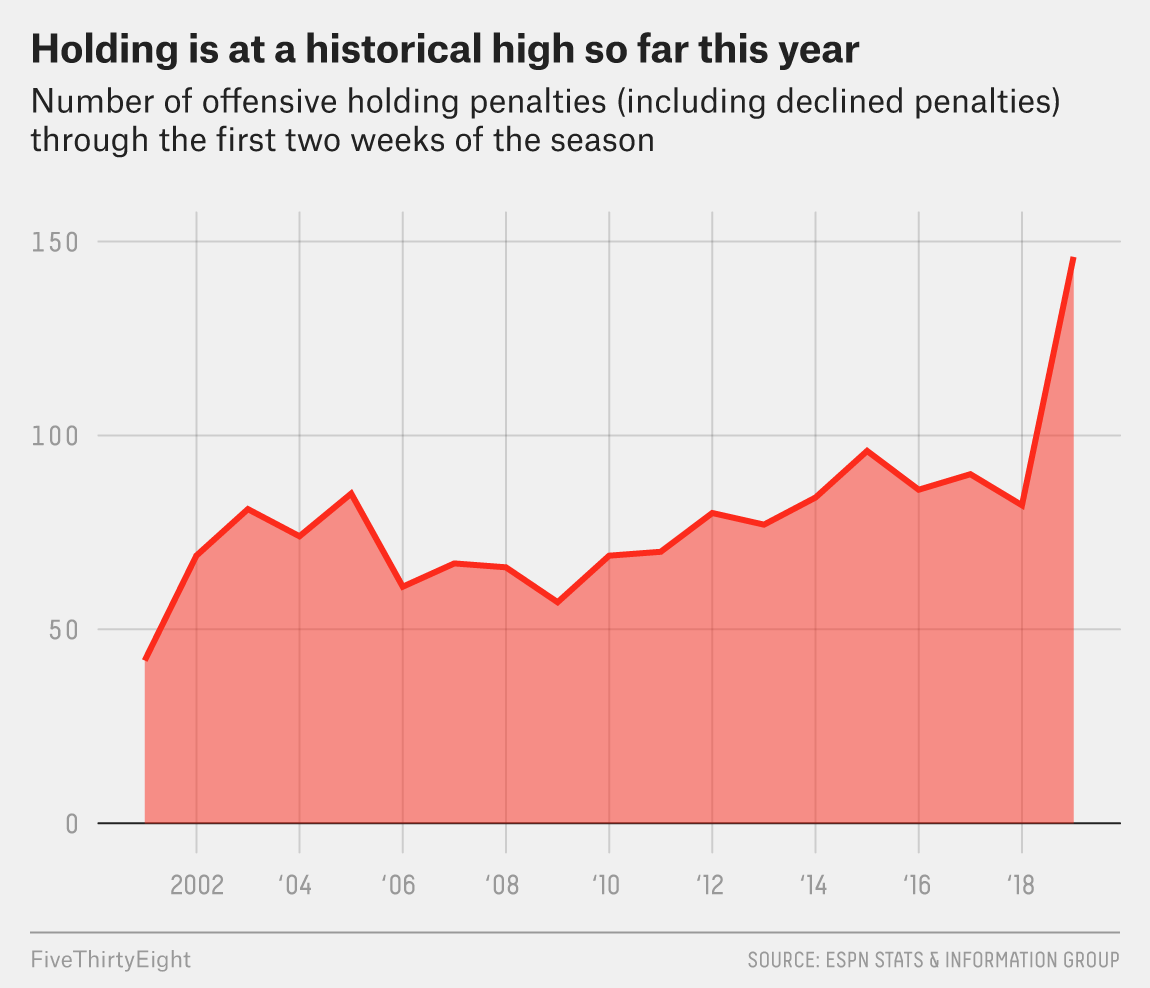 Offensive holding penalties in the first two weeks of the season rose 78 percent this year, from 82 in 2018 to 146 in 2019. If the current rate of holding penalties called continues over the course of the entire year, we might wonder: Are there winners or losers from the new rule emphasis?

Meanwhile, teams such as Chicago, the L.A. Rams, Pittsburgh and San Francisco were largely able to avoid holding penalties last season and may be in better shape than others if they continue their by-the-book performances.4

Of course, it could also be the case that all teams will be similarly affected by the increased number of holding calls. The year-to-year stability of the penalty at the team level isn’t terribly strong, and the league is now cracking down on a very specific type of holding. But even if the increase in holding calls is relatively constant across the league, there may be another way for teams to gain an edge in light of the new rules emphasis.

It turns out that holding is more likely to be called on a running play. From 2009 to 2018, holding was called on 2636 rushing attempts and 1673 passing attempts,5despite the fact that the majority of plays over that period were passes. Since 61.2 percent of holding calls on these plays occur when rushing, it suggests that running is more risky, and therefore less valuable.

NFL teams hardly need further incentive to call more pass plays, but nevertheless, here is potentially another reason to move away from the run game. Teams that pass more often than they run would stand to benefit the most from the new emphasis on back-side holding. Perhaps the officials will do what analysts have been unable to do all these years; that is, finally convince the NFL to reevaluate the frequency with which they run the ball.