Aston Villa is in danger of being relegated from the Premier League to the second division of the English soccer pyramid for the second time in five years. The Villans have amassed just 25 points from a possible 751 and sit in 17th place, just 1 point clear of the relegation zone.

FiveThirtyEight’s model doesn’t love Aston Villa’s prospects at the moment. It thinks the Villans are the third-worst team in the Premier League in terms of Soccer Power Index (SPI) — it even ranks Brentford and Leeds United, two teams that compete in the English second division, above them — and it gives the club a 42 percent chance of being relegated.

While relegation is a fact of life for many newly promoted clubs, it could be a death sentence for a club like Aston Villa (as it almost was once before). At the time of its first relegation, Villa was one of just seven teams to play in every Premier League season. Relegation for Villa was once nearly as unthinkable as relegation for clubs like Arsenal, Chelsea, Liverpool, Manchester United and Tottenham Hotspur.2 But then it happened, and now it might be happening again.

The good news is that Villa has been playing better since Christmas — it’s claimed 10 points in its last seven matches and has pulled itself out of the relegation zone, albeit only barely. The bad news is that nine of Villa’s remaining 13 matches are against teams currently sitting in the top half of the table. In those terms, Villa’s path is the most difficult among teams in or within 3 points of the relegation zone, a group that includes Norwich City, Watford, West Ham United, Bournemouth, and Brighton and Hove Albion.

To avoid relegation, Aston Villa is going to have to put together its best 13-match stretch of the season. Lucky for Villa, it employs Jack Grealish.

Villa’s captain has been the target of plenty of criticism to this point in his career, 3 but he’s silenced his doubters this season en route to becoming one of the Premier League’s best attacking players. Among players with at least 900 minutes played in 2019-20, Grealish ranks fifth in key passes made per 90 minutes (2.53), sixth in chances created (2.75) and 12th in both passes made in the attacking third (19.23) and pass percentage in the attacking third (82.5).

Because manager Dean Smith likes to switch formations frequently — he’s toyed with five so far this season — Grealish has featured as an attacking midfielder, a No. 10 situated in the middle of the field and a left winger. While he’s excelled everywhere he’s played, Grealish has been especially dangerous when deployed as a left winger in a front three. In the 12 games he’s played as a left winger, Grealish has made more key passes (3.17) and created more chances (3.33) per 90 minutes than both Sadio Mané (1.67, 1.97) and Raheem Sterling (1.58, 1.63) overall this season. And in terms of expected goals (xG), there’s no question about which position has suited Grealish best this season — he’s averaging 0.37 expected goals per 90 minutes as a left winger, versus just 0.14 when he plays anywhere else. 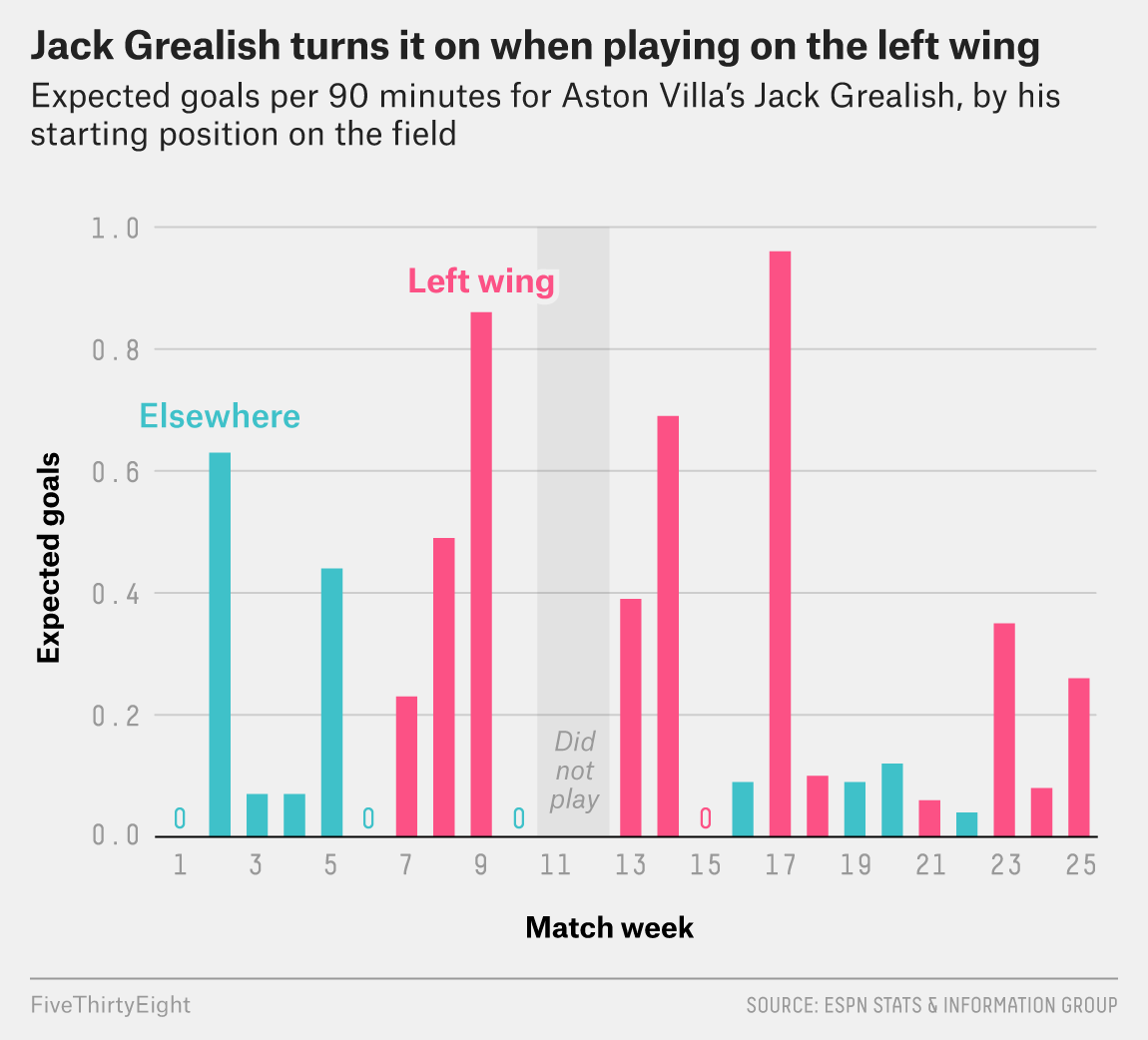 Grealish has been elite when playing on the left wing, but his ability to move back into the midfield as part of a 4-1-4-1 or play as a second forward in a 3-5-2 — as he did against Leicester City and Manchester City, respectively — makes him invaluable to Smith and Villa. This flexibility is an asset to any team, especially one currently involved in a relegation scrap. And though Grealish fancies himself as a creative “number eight” more than a winger,4 you get the feeling he’d do anything to save Villa — the club he joined when he was 6 years old, and the club his family has supported forever — from relegation.

And who knows, maybe Grealish’s versatility will earn him a spot on England’s Euro 2020 roster. National team boss Gareth Southgate hasn’t given Grealish the nod yet, but his current form is hard to ignore. Perhaps he can help bring football home even if saving his beloved Aston Villa is too Herculean a task this season.