For some time, I’ve been part of the doom-and-gloom brigade when it comes to Democrats’ fortunes at the midterm elections this November. As early as last August, on a panel at the Netroots Nation conference, I said that I expected a loss of 20 to 50 Democratic seats, which necessarily implied that a loss of their majority was quite possible. I’ve since revised the low end of that estimate downward, to a loss of 20 to 60 seats.

I’m not sure that there’s yet been enough time to assess whether the Democrats’ passage of health care reform seven days ago could mitigate — or broaden — their losses. Most polls suggest that the health care reform bill itself has become somewhat more popular since passage. But President Obama’s approval ratings are little moved, and there has thus far been little new polling on the generic ballot or perceptions of the Democratic congress. Moreover, any changes in the polling may prove to be temporary.

Still, there is one set of numbers that potentially contain relatively good news for the Democrats. These concern the enthusiasm gap, which may be lessening. Daily Kos / Research polling has found that while Republican voters remain exceptionally engaged by the midterm election cycle, Democrats are becoming increasingly engaged as well. Rasmussen, meanwhile, has found that about 5-7 percent of voters nationwide have gone from being somewhat approving of to Obama to strongly approving of him — and almost all of the movement is accounted for by Democrats. (Obama’s disapproval — including his strongly disapprove numbers — are little changed in the poll).

At the very least, there does not appear to be any fresh animus toward the Democrats for their actually having passed health care, whereas there probably is some fresh enthusiasm from their base. As such, I would probably revise my estimate of the Democrats’ losses just slightly, from a loss of 20-60 seats to a loss of 15-55. (Think of these numbers as representing perhaps the 10th and 90th percentiles, respectively; there remains some chance that the Democrats could lose more than 55 seats, or fewer than 15.)

But since so much attention has been focused on the potentially catastrophic losses for the Democrats, let’s pause for a moment to consider their upside case. How many seats could they lose while still having the midterms be a “win” for them?

A better way to interpret this question might be: how many seats can the Democrats lose while still having the chance to advance the key components of their agenda? In the Senate, I have argued, the number is probably about 3, as a 56-seat Democratic majority would allow them to formulate a 60-seat Democratic + RINO coalition with Scott Brown, Olympia Snowe, Susan Collins, and Delaware’s Mike Castle. (If the Democrats become more willing to use the reconciliation procedure after their victory on health care, of course, the math become somewhat fuzzier.) But what about in the House?

I took each Democrat-held House seat and assigned it points based on the race ratings from the four major forecasters: Cook, CQ, Rothenberg and Sabato. One point was awarded for a characterization of likely Democratic, 2 for lean Democratic, 3 for toss-up, 4 for lean Republican, and so forth. I then summed the ratings between the four forecasters and sorted the races from most to least vulnerable, randomly ordering the Democrats in the case of ties.

The idea is to assess how the ideological position of the median member of the House changes with an increasing loss of seats. Assuming that there were no changes in the composition of the Congress, for instance — no loss of seats, including in upcoming special elections, and that any retiring members were replaced by ideologically-identical cousins from the same party — the median DW-Nominate score of the House would be -.186 on a scale that runs from -1 (very liberal) to +1 (very conservative). This represents, in essence, the status quo.

From there, however, I began eliminating the Democrats one at a time in order of their vulnerability and replacing them with Republicans with an average Republican ideology score (+.635). The first Democratic-held seat to go, for instance, is that held by the retiring Bart Gordon in Tennessee’s 6th congressional district, which most forecasters expect to go to the Republicans. This technically makes no difference in the position of the median vote, however, as Gordon was already (slightly) to the right of the median member of Congress. The second-most vulnerable seat is LA-3, which Charlie Melancon is vacating to run for Senate. A Republican win there would also not move the median, however, since Melancon was likewise to the right of the median Congressman.

Eventually, however, some non-Blue Dogs inevitably begin to lose their seats, and the losses begin to add up. Needless to say, there is a very substantial shift with the loss of the 40th seat, when control of the majority changes hands. (There are hardly any moderate Republicans to form a buffer zone, as no current House Republican has a DW-NOMINATE score of lower than +.259, and few truly Republican moderates are likely to survive past the primary in the current political climate.) 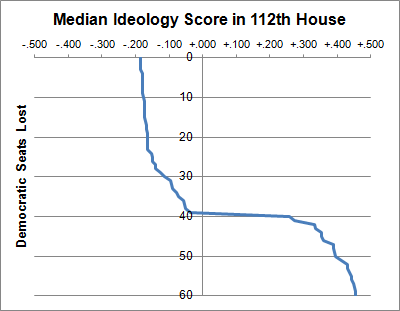 There is also something of an inflection point, however, that begins with the loss of about the 20th or the 23rd seat. Up to that point, the median vote in the House does not change very much, since most of the losses will be suffered by Blue Dogs who are not reliably voting with the Democratic majority in the first place. From that point forward, however, the Democrats quickly run out of Blue Dogs, and mainline members of their majority start to be defeated. The loss of the 21st through the 30th seats, for instance, moves the median vote almost twice as much as the loss of the first 20, and as the losses begin to accumulate into the 30s, the Democrats’ hold on power becomes very tenuous even if they nominally still control the House.

If the Democrats do not want their agenda to be substantially injured, then, they probably have an implicit goal of not losing more than about 20-23 House seats, and not more than about 3-4 Senate seats. Coincidentally, this is pretty close to the average loss suffered at the midterms by the incumbent party since World War II: 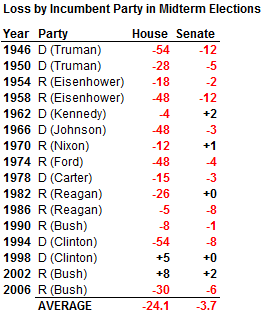 Whether a loss of, say, 19 House seats and 3 Senate seats would be regarded as a “win” by the media is hard to say — and would depend in part on what expectations had been established in the days and weeks immediately preceding the elections. Given where expectations are right now, however, I suspect that most Democrats would go to bed feeling pretty happy about that outcome and Republicans feeling as though they’d blown an opportunity. Indeed, if the narrative around them also improved — such that they felt emboldened to push their agenda or Republicans became more wary of obstructionism — their overall position would arguably even be somewhat stronger. For the time being, however, this remains something of a best-case scenario for them.