Since President Obama’s re-election in 2012, Republicans have worried about what an increasingly diverse electorate will mean for their future as a national party. Democrats, meanwhile, have started talking about turning ruby red states like Arizona and Texas blue.

How worried should Republicans be? And how realistic are those Democratic aspirations? A new study released on Thursday — based on data from the Census Bureau’s American Community Survey — points toward some answers: Republicans should be worried, but Democrats in Austin and Phoenix shouldn’t stock up on confetti just yet.

The study, from the left-leaning Center for American Progress, projects the growth in eligible voters in 12 states by 2014 and 2016. The projections — which broke down the eligible voter growth by race — show that fast-paced minority growth coupled with slow or negative growth among non-Hispanic whites has a substantial impact on the eligible voter makeup of the 12 states that the center examined.

The report — by Patrick Oakford, a research assistant, and Vanessa Cárdenas, the director of the the center’s Progress 2050 — chose states that were crucial electoral battleground, home to rapid nonwhite population growth, or both. In each state the center analyzed, the white share of eligible voters decreased in 2014 and again in 2016. 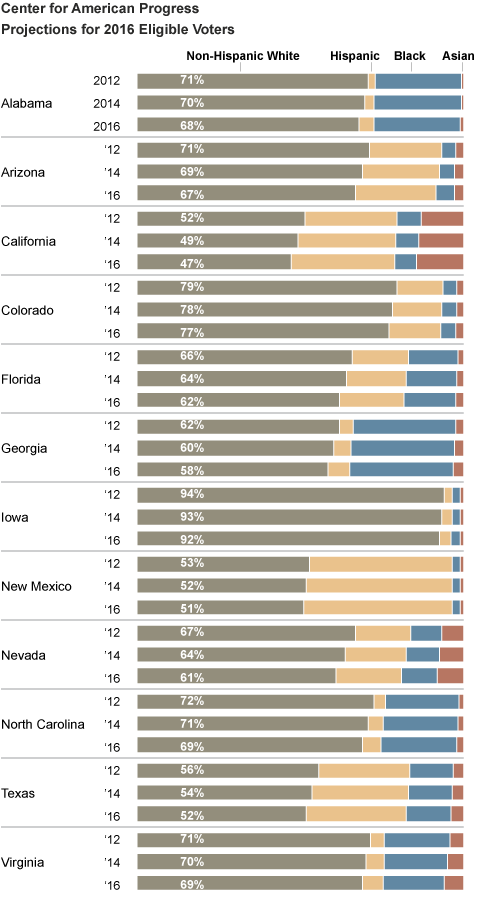 The center used the the American Community Survey’s one-year population estimates to work out the annual growth rate for each demographic group from 2008 to 2011. It then projected that into 2014 and 2016. The projections assume that each demographic group will grow or shrink by the same percentage each year. That means that groups that are growing, like Hispanics, will have rising numbers of new eligible voters each year (like compounding interest).

Of course, there is inherent uncertainty in forecasting population change. It’s possible that minority growth could be more linear. That is, the number of Hispanics that enter the eligible voter pool each year could remain constant instead of increasing. Hispanic and Asian-American growth may even slow. Then again, it could exceed these forecasts.

So what would the 2012 presidential election have looked like with the more diverse electorate projected by the Center for American Progress? The impact is not as big as might be implied by the change in the eligible voter makeup.

The number of new, nonwhite eligible voters may be staggering, but not all those eligible voters actually go to the polls. There are not yet solid turnout rate estimates for these demographic groups for 2012 (that will come in the spring, when the Census Bureau publishes it biannual supplement on voting). But according to a Pew analysis of the Census Bureau’s report on the 2008 election, the turnout rate that year was 66 percent for non-Hispanic whites, 50 percent for Hispanics, 65 percent for blacks and 47 percent for Asian-Americans.

While there are indications that Hispanic, African-American and Asian-American turnout increased in 2012, it still lagged far behind that of non-Hispanic whites.

As a result, the fast-growing Hispanic and Asian-Americans communities continue to “punch below their weight.” For example, if a Democrat wins 70 percent of the Hispanic vote (roughly what Mr. Obama earned nationally in 2012) but just half of eligible Hispanics go to the polls, then a Democrat gains a net of only two votes over their Republican opponent for every 10 new eligible Hispanic voters.

If we rerun the 2012 election with the center’s new eligible voters added in, and apportion the voters in each demographic group to Mitt Romney and Mr. Obama according to exit polls, we can get a rough sense for how big an effect these new voters might have.

For states where the 2012 exit poll results of some demographic groups were not reported because of small sample size, that demographic group’s partisan breakdown was determined according to the national exit polls. Exit polls were not conducted in Alabama, Georgia, New Mexico or Texas. 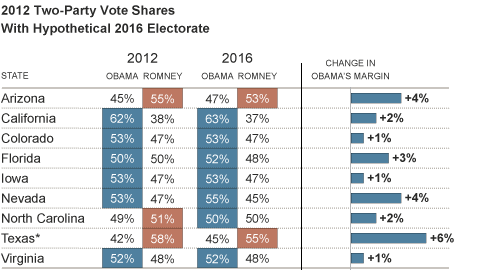 The more diverse electorate solidifies Mr. Obama’s advantage in several crucial battleground states. He gains a single percentage point in Colorado, Iowa and Virginia, three states that are usually close enough that one percentage point matters. Mr. Obama’s margin of victory in Florida grows from almost 75,000 to more than 300,000.

Nevada, following the path of New Mexico, moves from looking like a battleground state to a more solidly blue one. And North Carolina shifts from going marginally to Mr. Romney to essentially a tossup. With the new voters, Mr. Obama would have carried the Tar Heel State by about 20,000 votes.

But while Mr. Obama gains several percentage points in Arizona and Texas, both remain firmly in Mr. Romney’s column. Moreover, the Texas projections are likely somewhat generous toward Democrats. There were no exit polls in Texas in 2012, so the new voters were apportioned according to national exit polls. In the past, however, Texas Hispanics have been less overwhelmingly Democratic leaning than the national average.

So while the continued growth of minority voters is likely to harden the Democrats’ advantage in vital swing states, it is far less likely in the near future to upend the entire game board by putting Texas’s 38 electoral votes and Arizona’s 11 in play.

One wildcard may be immigration reform. If legislation is passed that gives some undocumented immigrants a path to citizenship, millions of new minority voters might enter the electorate. Some of the most significant influxes of new citizens are likely to come in Texas and Arizona (although even if legislation is passed, it is unlikely to go into effect in time to affect the 2016 election).

The other variable is turnout. Democrats could speed the rate at which Arizona and Texas become competitive if they could accelerate the rise of Hispanic turnout rates. So far, however, Hispanic turnout has increased incrementally.

Still, that should be small comfort to Republicans with Oval Office ambitions. Mr. Obama won re-election comfortably in 2012 without Texas and Arizona, and in many critical swing states, the demographic trend is still moving — slowly — away from the G.O.P.