New York City is a top-tier restaurant destination, with tens of thousands of choices and cuisines from every corner of the Earth. But what if every Big Apple resident ate out on the same day? Could the city’s delis, restaurants and bars accommodate everyone?

The answer depends on:

We know how many people live in New York — let’s call it at an even 8.3 million. We can get a rough number of the five boroughs’ restaurants with data from the New York City Department of Health, which has issued health grades to about 25,000 establishments. With those two constants, we can estimate values for the last two variables.

This table shows how many times all of New York could dine out in a day (if we assume that restaurants are open for 12 hours), given different values for meal length (columns, in minutes) and average restaurant capacity (rows). The green cells are situations in which, given those two values, every New Yorker could dine out. The red cells are situations in which at least some New Yorkers would go hungry. 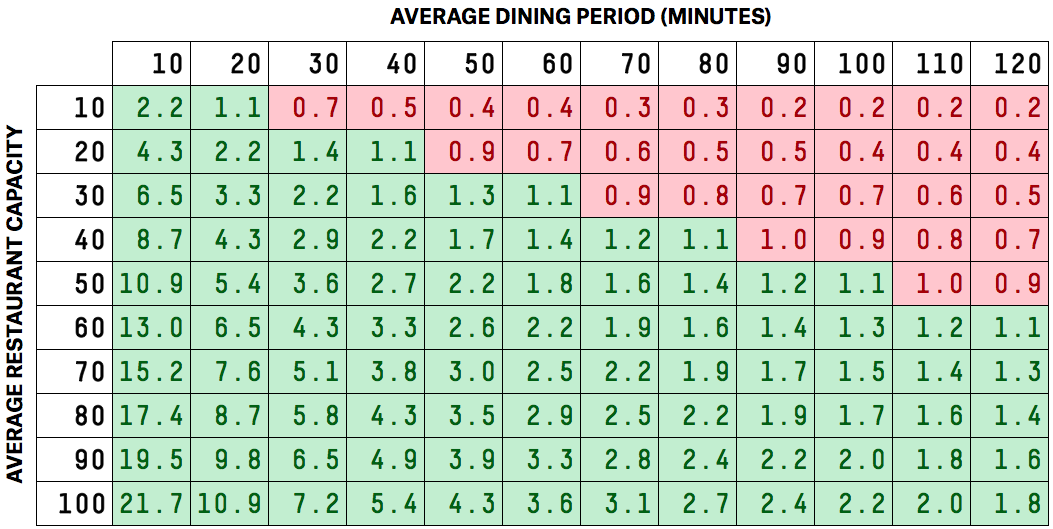 So, is it possible?

It is, depending on the answer to the restaurant-capacity question. I would guesstimate that the average capacity of a New York restaurant is about 20 people, factoring in that there are more hole-in-the-wall places. As long as diners keep meals to an average of 40 minutes or less, all of New York could eat out in a single day.

But this would clearly require coordination, and the planning would have to be down-to-the-minute. And while some New Yorkers would eat at Per Se, others would get Taco Bell in Union Square. It would also entail residents obeying the planners and following directions closely. In New York? Fat chance.