At midnight on Thursday, the N.B.A. locked out its players in what could be the start of a long labor dispute. Some observers, like ESPN’s Michael Wilbon, believe the entire 2011-12 season could be threatened.

Such a move would not be without precedent: the N.H.L. canceled its 2004-5 season. But the N.B.A.’s current financial condition is different than the N.H.L.’s in one important respect. Whereas there was almost no doubt that the N.H.L. was in fact losing money in advance of its lockout — player salaries had mushroomed by more than 400 percent from 1994 to 2004, according to independent estimates — the N.B.A.’s claims of financial hardship should be viewed more skeptically.

Instead, independent estimates of the N.B.A. financial condition reflect a league that has grown at a somewhat tepid rate compared to other sports, and which has an uneven distribution of revenues between teams — but which is fundamentally a healthy and profitable business. In addition, it is not clear that growth in player salaries, which has been modest compared to other sports and which is strictly pegged to league revenue, is responsible for the league’s difficulties.

The table below reflects the N.B.A.’s financial condition from its 1989-90 through 2009-10 seasons, as according to estimates prepared by Forbes and Financial World magazines. (All figures are adjusted for inflation. Some data was not published by Forbes in some years and is therefore left blank.) 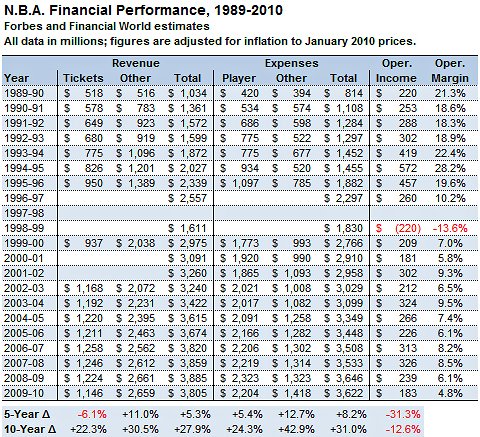 Other revenues, like licensing and media rights, have increased at a healthier clip, because the N.B.A. is locked into long and lucrative television contracts. They have grown by 11 percent over five years, adjusted for inflation, or by 30 percent over 10 years.

The league’s primary expense is player salaries. They have followed a nearly identical trajectory to league revenues, having grown at a 24 percent rate over 10 years, but with growth having flattened out since the recession. This is not a coincidence: under the league’s current collective bargaining agreement, player salaries are strictly tied to league revenues. In fact, because of a little-known provision in the labor agreement, players must return a portion of their salaries if they exceed 57 percent of league revenues, as has happened in several recent seasons. As I will discuss at more length later, the portion of revenues earned by N.B.A. players is similar to that of the other major sports leagues and has been stable over the past decade.

Growth in non-player expenses has outpaced that of salaries, having increased by 13 percent over five years and 43 percent over 10 years. Although some of this undoubtedly reflects sound business ventures, like the league’s investments in digital media or efforts to expand the game internationally, they have nevertheless had a reasonably large effect on the league’s bottom line. Had nonplayer expenses been the same in 2009-10 as they were in 1999-2000 (adjusted for inflation), the league would have made a record profit that year.

Even as it stands, however, the Forbes data suggests that the league is still profitable. Its operating income — revenues less expenses (but before interest payments and taxes) — is estimated to have been $183 million in 2009-10, or about $6 million per team. The N.B.A.’s operating margin (operating income divided by revenues) was about 5 percent in 2009-10 and has been about 7 percent during the life of the current labor deal.

A 5 percent or 7 percent profit is not dissimilar to what other businesses have experienced recently. Fortune 500 companies, for instance, collectively turned a 4.0 percent profit in 2009 and a 6.6 percent profit in 2010 (both figures after taxes). Profit margins in the entertainment industry, in which the N.B.A. should probably be classified, have generally been a bit lower than that.

So why are N.B.A. owners seeking such significant reductions in player salaries, reportedly to about 45 percent of league revenues? The simple reason is that they think they can — and this reflects an awful lot of money. If salaries were reduced to 45 percent of revenues, this would save the owners roughly $500 million per year, or about $3 billion over the course of a six-year labor contract. It is hard to estimate either the near or the long-term cost of cancelling a season, but the potential gain from a more favorable contract is large enough that it is something the owners might be willing to risk.

What the owners may be thinking about is their position compared to that of the other sports leagues. Baseball and football are cash cows, with the N.F.L. having brought in more than a billion in profits (before taxes) in 2009, and Major League Baseball about $500 million in its most recent season.

By contrast, the N.B.A.’s position is more comparable to that of the N.H.L. Several N.B.A. owners also own N.H.L. teams, and they may be looking to that league’s lockout as having been successful, because it recovered from $228 million in operating losses in the three seasons preceding its lockout (according to the Forbes data) to a state of profitability comparable to the N.B.A.’s.

It is not clear, however, how much player salaries are to blame for the N.B.A.’s having failed to achieve an N.F.L.-like level of profit. Between 2000 and 2009, player salaries in the N.F.L. represented an average of 56 percent of league revenues, and that total averaged 58 percent in Major League Baseball — both close to the 57 percent target enshrined under the N.B.A.’s current deal. By contrast, when the N.H.L. locked out its players and was losing money, player salaries made up 66 of league revenue. (They have since fallen to about 54 percent.) 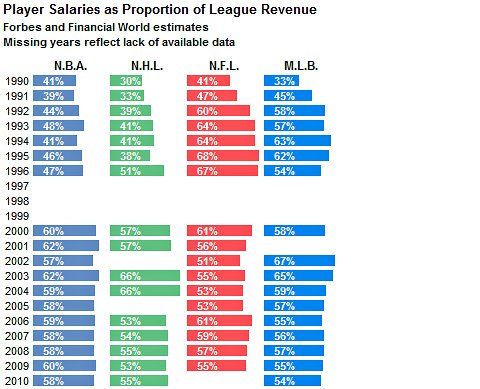 The other factor is the distribution of revenue from team to team: 17 of the 30 N.B.A. teams lost money in 2009-10, according to the Forbes data. Most of the losses were small, and the league was still profitable as a whole because of profits made by successful franchises like the New York Knicks, Chicago Bulls and Los Angeles Lakers, who together netted about $150 million by themselves. But there are a sizable number of owners who have reason to be unhappy.

In some ways, the N.B.A.’s present condition closely resembles that of Major League baseball before its 1994-95 strike. Baseball was still profitable as a whole in advance of the strike, but about one-third of its teams had lost money in 1993, according to Forbes, while just four teams accounted for almost half of all league profits.

The solution that baseball has since adopted — greater revenue sharing in lieu of a salary cap — could also be a natural one for the N.B.A.: the profits made by the Knicks, Bulls and Lakers alone would be enough to cover the losses of all 17 unprofitable teams. (Players might have some reason to object to revenue sharing — some versions of it are the economic equivalent of a tax on player salaries — but they would probably prefer it to the more draconian measures that the league will try to impose.)

Another way in which the N.B.A. resembles baseball, unfortunately, is by having circulated financial data that doesn’t necessarily hold up to scrutiny. In 2001, Major League Baseball issued figures suggesting that it had incurred losses of $232 million before interest and taxes; Forbes’s independent estimates instead suggested that the league had made a profit of $127 million. But that year’s labor dispute, and the next in 2006, were resolved amiably and with few changes to baseball’s economic structure, and years of profits have followed since.

A similar discrepancy exists today between Forbes’s estimates — a $183 million profit for the N.B.A. in 2009-10, and those issued by the league, which claim a $340 million loss. The difference between the two numbers is roughly of the same size on an annual basis as the salary concessions the N.B.A. is seeking.

There are several reasons to be skeptical of the N.B.A.’s figures. First, many of the purported losses — perhaps about $250 million — result from an unusual accounting treatment related to depreciation and amortization when a team is sold. While the accounting treatment is legal, these paper losses would have no impact on a team’s cash flow. Another potential (and usually within-the-law) trick: moving income from the basketball team’s balance sheet to that of a related business like a cable network, or losses in the opposite direction.

Second, the leaked financial statements for one team, the New Orleans Hornets, closely matched the Forbes data. And the sale prices for some teams have exceeded their figures. The Golden State Warriors were purchased for $450 million in 2010 — more than the $363 million that Forbes estimates they are worth. The Detroit Pistons were recently sold for a price reported to be about $420 million, more than Forbes’s estimated value of $360 million. The Washington Wizards were bought for $551 million last year, a 70 percent premium over Forbes’s estimated price of $322 million. Comparing actual to theoretical sale prices is not always safe because other assets are sometimes packaged with the teams, but the market for N.B.A. franchises is clearly quite healthy and inconsistent with what the league claims to be a failing business model.

The third reason for skepticism: the N.B.A.’s data has not been made public, although it has been shared with the players’ union. If the league expects their figures to be viewed credibly, they should open up their books to journalists, economists and fans.

Fourth, the current labor deal — which was signed in 1999 and renewed with relatively few changes in 2005 — was initially considered favorable to the league. Although revenue growth may have been more tepid than the league might like, especially in the past few recessionary years, player salaries are tied to revenues and have grown at no faster a rate. The claims made by sports owners on the occasion of a labor dispute — smart and successful capitalists who suddenly become enamored of restrictions on the free market and their own wherewithal to make decisions — often stretch credulity. But to hear the N.B.A. owners complain about the current deal now, when none of the fundamentals have changed, reminds one of the old Woody Allen joke about two women kvetching at a restaurant: “Boy, the food at this place is really terrible,” one says. “I know. And such small portions,” the other replies.

Put another way, there is no reason to assume that the N.B.A.’s actual financial condition falls somewhere in between the two figures: it may be just as likely that Forbes is underestimating rather overestimating the league’s profits. For instance, The Times reports the league’s revenues (not profits) to have been $4.3 billion in 2010-11, more than the $3.8 billion estimated by Forbes for 2009-10. (One reason that the Forbes estimates could be too low: it has become more difficult to measure ticket revenue since teams are now designating some of their most expensive tickets as ‘premium seating,’ and these seats are not reflected in publicly-available estimates of ticket prices.)

None of this means that the N.B.A. is without problems. For instance, the sluggish growth in ticket revenues may suggest that the league’s fans, who are younger than those for other sports and more likely to be African-American, are being priced out of the stadium experience.

In addition, the fact that a significant number of teams are failing to turn a profit, even by the Forbes estimates, reflects a potential lack of competitive balance in the league. Since 1990, a total of eight distinct N.B.A. teams have won a championship, compared to 13 teams in each of the other major sports leagues. Although some of this has to do with factors intrinsic to the structure of basketball, the current salary cap rules may worsen matters by limiting player movement, making it difficult for teams to rebuild. Fans in many cities have little realistic hope of seeing a championship any time soon.

Nor does this mean that we aren’t in for a long lockout. Rather, the fact that the N.B.A. has released financial data that is so at odds with estimates provided by credible and unbiased organizations like Forbes suggests that the league’s owners are armed to win the public relations battle — a key part of what could be a yearlong war of words with their players.

An earlier version misstated the loss claimed by the N.B.A. as $370 million.