Herman Cain seems to have survived his campaign’s roughest week better than most analysts, including yours truly, might have expected. Two polls conducted amid the swirl of accusations this week continued to have him essentially tied for the lead in the Republican field. In an ABC News/Washington Post poll conducted Monday through Thursday, Mr. Cain was at 23 percent, just behind Mitt Romney. And he was just ahead of Mr. Romney in a Rasmussen Reports poll conducted on Wednesday night, where Mr. Cain got 26 percent of the vote.

I’m not quite sure, though, that it’s right to take from this the message that Mr. Cain is still gaining ground (as some headlines on Friday have implied).  Mr. Cain may have gained since the previous ABC News poll, which was conducted Sept. 29 to Oct. 2. But his numbers in the new surveys are no better than those conducted by other organizations before the scandal broke, and are perhaps a couple of points worse: 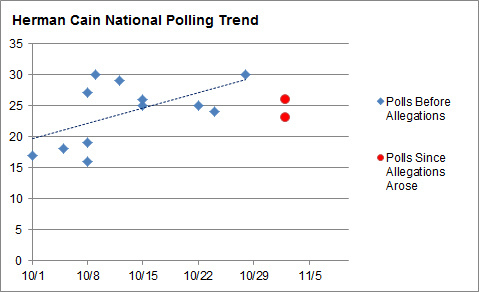 It looks to me as if Mr. Cain had been on a positive trajectory before, perhaps having moved up to about 28 percent of the Republican vote. The two new surveys have him at 23 percent and 26 percent. That’s not bad at all — a scandal-marred Herman Cain still has as much of the vote as Mitt Romney. But any upward momentum Mr. Cain had has been halted, and he may have lost a couple of points.

The scandal is still dominating the headlines, moreover, with new revelations coming out just about every hour. And voters can sometimes have a delayed reaction to these sorts of events: Rick Perry’s poorly received debate on Sept. 22 initially produced little change in the polls, but his numbers began to embark on a sharp downward trajectory about a week later.

My guess remains that the scandal will ultimately have an impact on Mr. Cain. The allegations cut against many of the qualities that made him well liked in the first place. And key Republican blogs, which defended Mr. Cain early on, were turning against him by the end of the week.

It may be that some of Mr. Cain’s supporters are shopping for a new candidate, but sticking behind him until (and unless) they find one. A rapid-fire series of debates is scheduled for the next couple of weeks — including an unusual one Saturday in which Mr. Cain will debate Newt Gingrich one on one — so they will have plenty of opportunities to sample the merchandise.

But what if Mr. Cain is still polling at 25 percent two or three weeks from now? It would be hard to say that his supporters were just picking out the flavor of the month if they stuck by him through this. So, yes — we would then need to consider the possibility that he could become the Republican nominee. But three weeks is a lifetime away given the volatility in this campaign, and these next few weeks may determine whether Mr. Cain is remembered as a presidential candidate or a punchline.