Earlier this month, Roger Federer said the Davis Cup, which ends Sunday, “is not what it used to be anymore.” Is Federer, the winningest major men’s singles champ, correct about the event that was once the pinnacle of men’s tennis?

Yes. Look no further than the quality of opponents Federer and his teammate, Stan Wawrinka, have played so far this year in singles matches. No. 12 Jo-Wilfried Tsonga, whom Wawrinka beat in the opening match of the Davis Cup final in Lille, France, on Friday, is the highest-ranked singles opponent Switzerland will face all year. No other finalist since at least 2004 has managed to avoid facing at least one top-8 opponent in singles in a live match at some point in the competition.

The overall level of competition has slipped: The median ranking of singles players in live matches this year in the World Group is 40, the worst level of at least the last decade. By median ranking of opposing players throughout the year’s competition, France has had the easiest time of any finalist since 2004, while Switzerland has had the third-easiest. (The U.S., in 2004, had the second easiest slate of opponents.)

No. The Davis Cup is as important as it’s been in recent history. Look no further than the participation of Federer and Wawrinka. The two Swiss stars are ranked No. 2 and No. 4 in the world, respectively. Each one last played a match just six days ago, in a different country (the U.K.) on a different surface (indoor hard court). That match, as it happened, was between the two of them, and it was brutal. Federer won but hurt his back in the process. Wawrinka took the loss hard. “I was destroyed,” he told the press in Lille earlier this week. The two teammates also argued with each other after the match, reportedly over comments yelled by Federer’s wife, Mirka, from courtside at Wawrinka during the match.

Yet despite all those reasons not to play, the two men represented Switzerland on Friday. Asked Thursday if he’d be playing if this weren’t the Davis Cup final, Federer said, “I don’t know. It’s a good question.” After Wawrinka’s win, Federer was routed by Gael Monfils in straight sets, though he said afterward that he felt better as the match went on.

Unless one of the two Swiss leading men skips a singles match Sunday, they’ll play every live singles match the team has played this year, each one while ranked eighth in the world or better. They’re the only two players to compete in a meaningful Davis Cup singles match this year while ranked in the top five. And they make Switzerland just the third team since 1983 — as far back as rankings are available from the ATP World Tour website — to play two top-four singles players in live singles matches in a final. (The last two, the U.S. in 1984 and 1997, both lost in the final.)

Federer’s and Wawrinka’s total commitment is a total outlier for recent Davis Cup finalists. Even the few finalists that have had two Top 10 players usually use a lower-ranked player at some stage of the competition. Since 2004, only the 2007 U.S. team reached a final while avoiding using a player ranked outside the Top 30, and its lowest ranked singles player was No. 13 James Blake. 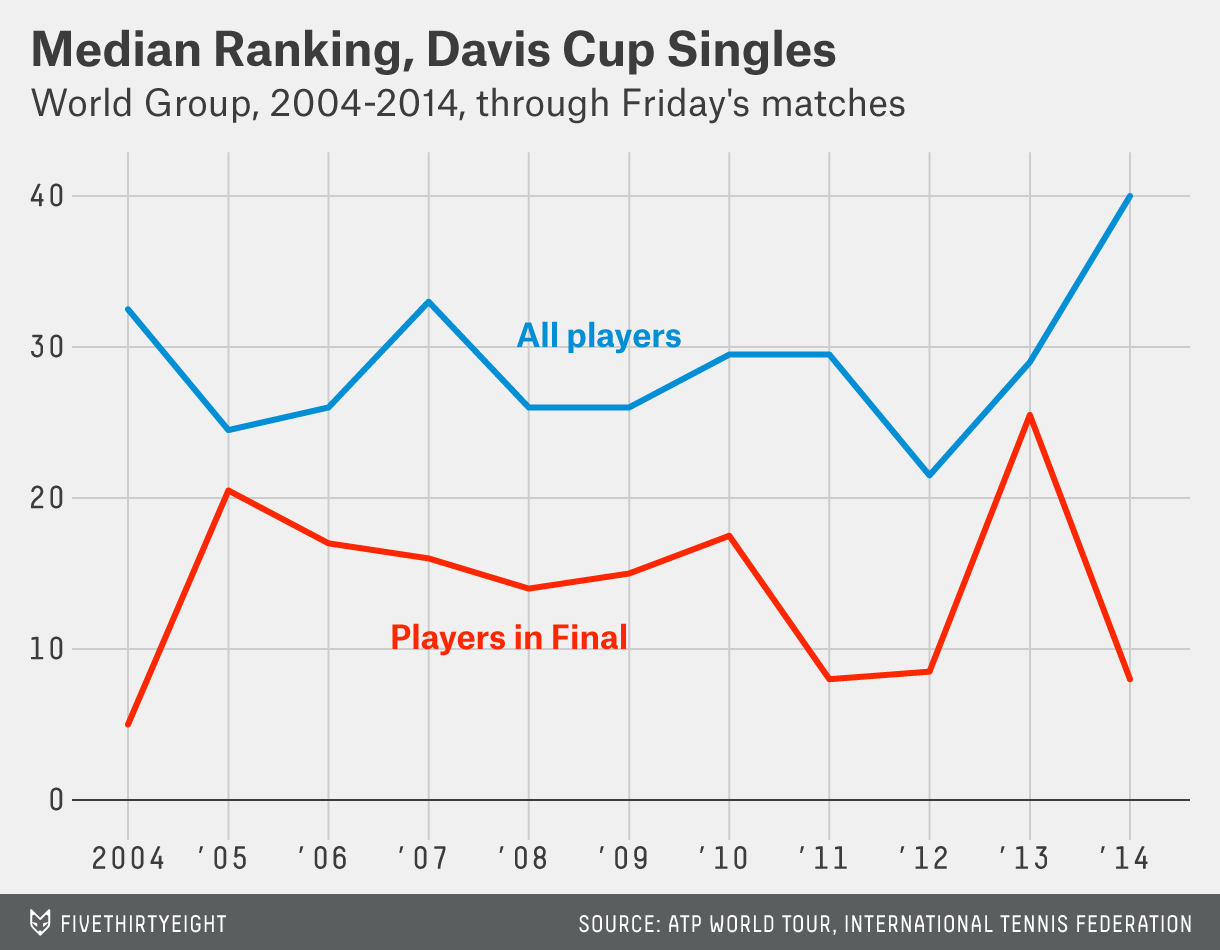 Methodology note: I only counted World Group live matches, those before one country had reached the three wins needed to take a Davis Cup match (called a tie). I went by match, not player, so if a player played two matches in the same tie, he counted twice. I also skipped doubles because it’s unclear how to weigh players’ singles and doubles rankings.