Bubba Watson captured his second green jacket Sunday, winning the Masters Tournament by three strokes over Jonas Blixt and Jordan Spieth. The 20-year-old Spieth gamely vied for the championship over most of the front nine,but fell apart just before the turn, and Watson cruised down the stretch. According to Ken Pomeroy’s automated golf-win probabilities feed on Twitter, Watson never had less than an 58 percent chance of winning the Masters after he made birdie — and Spieth made bogey — on the ninth hole.

Where does Watson’s 2014 tournament rank in the pantheon of Masters performances? Better than you might think.

Watson’s raw score, 280, isn’t too special. That mark was the 91st best in Masters history and put him in a 13-way tie for the 37th-best 72-hole score by a winner. Watson’s to-par number wasn’t overly impressive, either: 8-under would have been good enough to win only about 54 percent of historical Masters Tournaments, which puts Bubba squarely in the middle as far as winners go.

Of course, none of this takes into account the difficulty of the conditions on the course in a given year. To adjust for that, we need to measure Watson not relative to an arbitrary number such as par, but rather relative to the average score of the field he played against. Doing this for all players who completed 72 holes (throwing out those who missed the cut), Watson took 11.5 fewer strokes than the average competitor at the 2014 Masters. However, that number — minus-11.5 — actually moves Watson down in the rankings of best Masters performances, from 37th by raw score to 53rd among all-time winners. It’s a far cry from the 24.8 strokes that Cary Middlecoff had on the field in 1955, for example. In fact, even Watson himself was better in 2012 by this measure, beating the field by 12.5 strokes.

But we need to make one more adjustment for the depth and distribution of talent in the field. That’s where we take our cue from Bill Barnwell, my colleague at Grantland, who saw that golf scores were normally distributed and thus started taking the z-score of players’ stroke totals, or how many standard deviations a performance is above the mean.

This is where Watson’s 2014 gained a lot of ground. The standard deviation of scores at this year’s Masters was extremely small, just 4.6 strokes for players who made the cut (compare that to the field’s 6.0 standard deviation when Watson won in 2012).

In fact, Watson’s Masters performance last weekend was quietly better than a lot of previous ones. If we run the numbers for every Masters since tournament play began in 1934, Watson’s 2014 z-score ranks as 11th best: 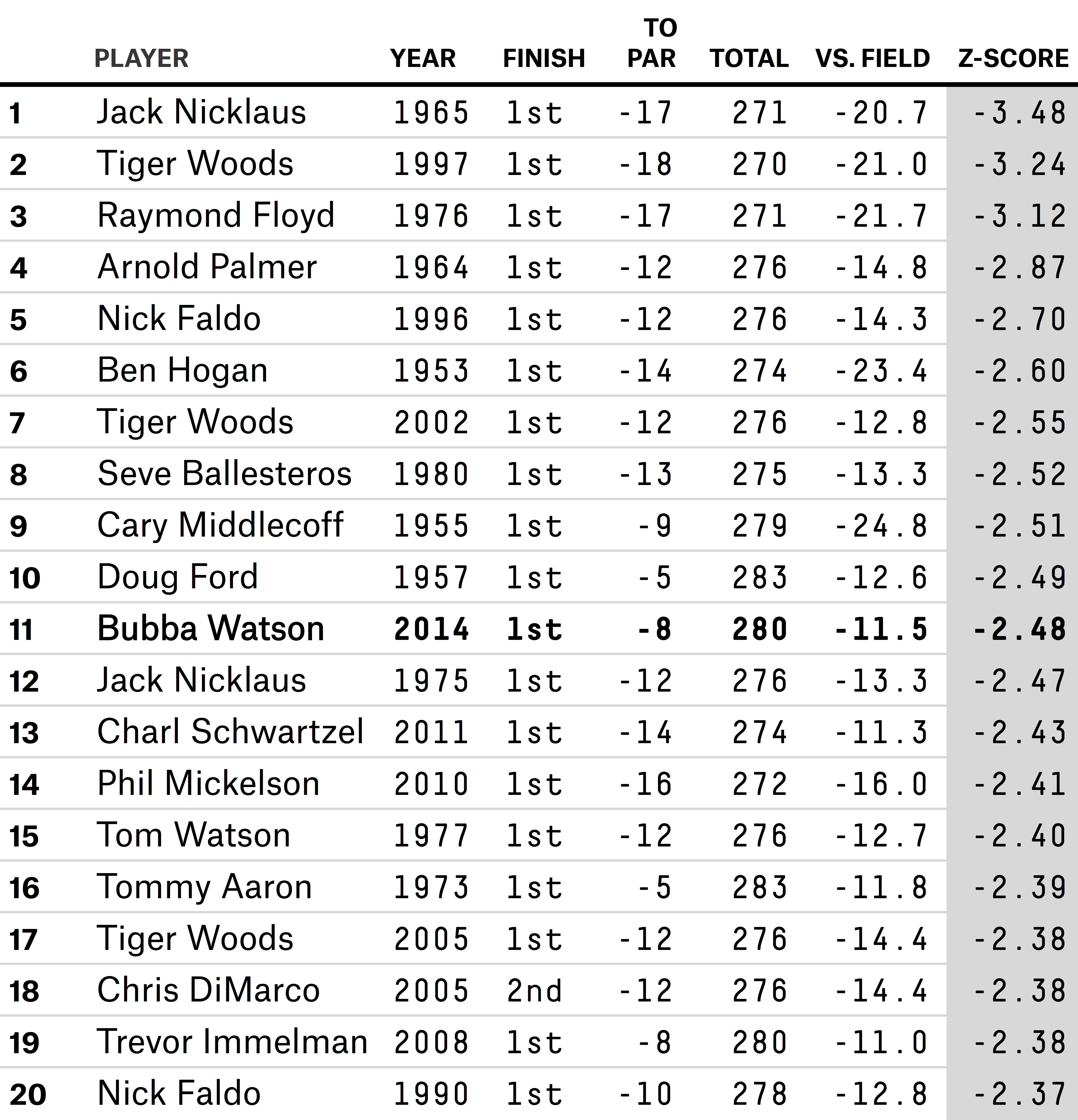