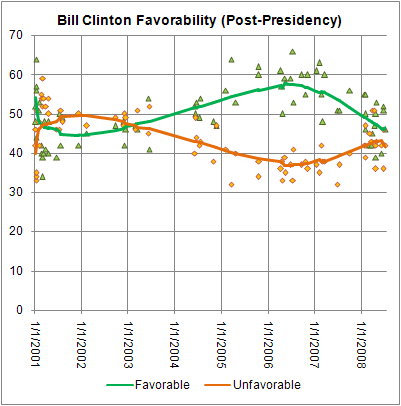 That’s a Pollster.com-style chart of Bill Clinton’s favorability ratings since the start of calendar year 2001, just as he was preparing to leave office. The patterns are fairly easy to infer. Clinton remained popular in the waning days of his Presidency. Once he left office, his numbers essentially became a mirror image of George W. Bush’s, moving into net-unfavorable territory when Bush was reasonably well-liked, and then rising as the President declined in popularity. But since his wife began to run for office, his numbers have faltered, falling from about a +20 at their peak in 2006 and early 2007 to roughly +5 now.

I think there is more risk than the insta-pundit reaction seems to be acknowledging in the news that Bill Clinton will speak just before the Vice Presidential nominee on the Wednesday night of the Democratic convention. This is a huge speech, and it means that there is going to be an awful lotta Clinton at the convention, with Hillary probably delivering the keynote on Tuesday and Bill stealing the spotlight on Wednesday.

Indeed, the only reason why Bill’s speech won’t upstage Obama’s is because Obama is such a strong orator. It will possibly upstage his wife’s, and probably upstage the vice president’s. In fact, it puts Obama in even more of a pickle in making his VP choice. Does it become even more important now to have a ‘change’ candidate, to avoid the convention being too much of a back-to-the-future affair? Or do you need someone who won’t create an awkward contrast with the Clintons? If the importance of oratory is elevated by the chore of having to speak after Bill Clinton, does that boost the prospects of the relatively stronger speakers (Joe Biden and Tim Kaine) at the expense of the relatively weaker ones (Evan Bayh and Kathleen Sebelius)? Does it help someone like Wesley Clark, who is relatively well equipped to navigate these different parameters? And how sure are we that we should be ruling out Hillary?