This is the map from the McCain website’s “strategy briefing”: 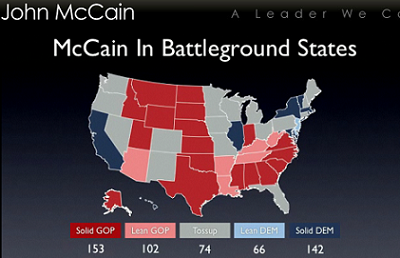 This is pretty interesting viewing. What’s tricky about it is that it at once seems to be an exercise in expectations-setting (i.e. lowering them) and an effort to reassure potential donors about McCain’s electability (i.e. raising expectations). This produces a map that isn’t particularly internally consistent. Arizona is described as a “Lean GOP” state while Virginia is described as “Solid GOP”. Florida is described as a “Toss-Up” — and so is Connecticut.

However, I don’t know that this can entirely be dismissed as an exercise in spin, because so far McCain’s travel schedule has pretty closely matched this map. For example, McCain made four campaign appearances in Florida over the past month, but none in Virginia or Indiana. He’s visited both Kentucky and Tennessee in the past month, two states that might be competitive against another Democrat, but are gimmes against Barack Obama. McCain has made four appearances in California, two in Washington, and one in Oregon, none of which look like they’ll be especially close.

Of course, choosing to campaign in a particular state is not purely about getting the locals to vote for you. Early in the campaign, it can also be an exercise in branding. McCain wants to set some low hurdles for himself in states like Kentucky, Tennessee and Louisiana where he should continue to maintain strong leads in the polling. He’s supposed to be strong in the Western states and strong among independents, so he makes pretenses about competing in California, which is Western and has a lot of independents. But he seems to think it dangerous to concede, for instance, that Virginia is a swing state, since Virginia is a state that Republicans are supposed to win, and McCain is supposed to be an above-average Republican.