Over the past several months, the Boy Scouts and Girl Scouts have been in the headlines. The Boy Scouts of America’s 2013 decision to allow openly gay Scouts (while still banning openly gay Scout leaders) has garnered continuous attention. And, more recently, the Girl Scouts of America — long the more progressive of the two groups — teamed up with LeanIn.org on its “Ban Bossy” campaign, which strives to promote leadership roles for girls.

The two groups have been around for more than a century, and as the country’s values have shifted, both organizations have had to balance tradition and adaptation.

Both groups have a statement of their values in the form of their Scout laws.

And the Girl Scout Law:

I will do my best to be Honest and Fair, Friendly and Helpful, Considerate and Caring, Courageous and Strong, and Responsible for what I say and do, And to respect myself and others, respect authority, use resources wisely, make the world a better place, and be a sister to every Girl Scout.

I wanted to test which values system was more in line with the values of Americans. So we ran a (relatively small) survey of 535 respondents through SurveyMonkey Audience, asking how important or unimportant each individual value was (For the Girl Scouts, we used the terms honest, fair, friendly, helpful, considerate, caring, courageous, strong, responsible for actions and respectful).

Of course, many of these aren’t controversial. Honesty is, overall, considered a solid policy, abstractly speaking. But some of these are a bit weedier — how important is obedience, precisely? — and that’s where the two sets of values differentiate themselves.

This table ranks the 22 values (20 of which are unique — both groups prefer “friendly” and “helpful” scouts) by percent of respondents who said they were “very important” or “somewhat important”: 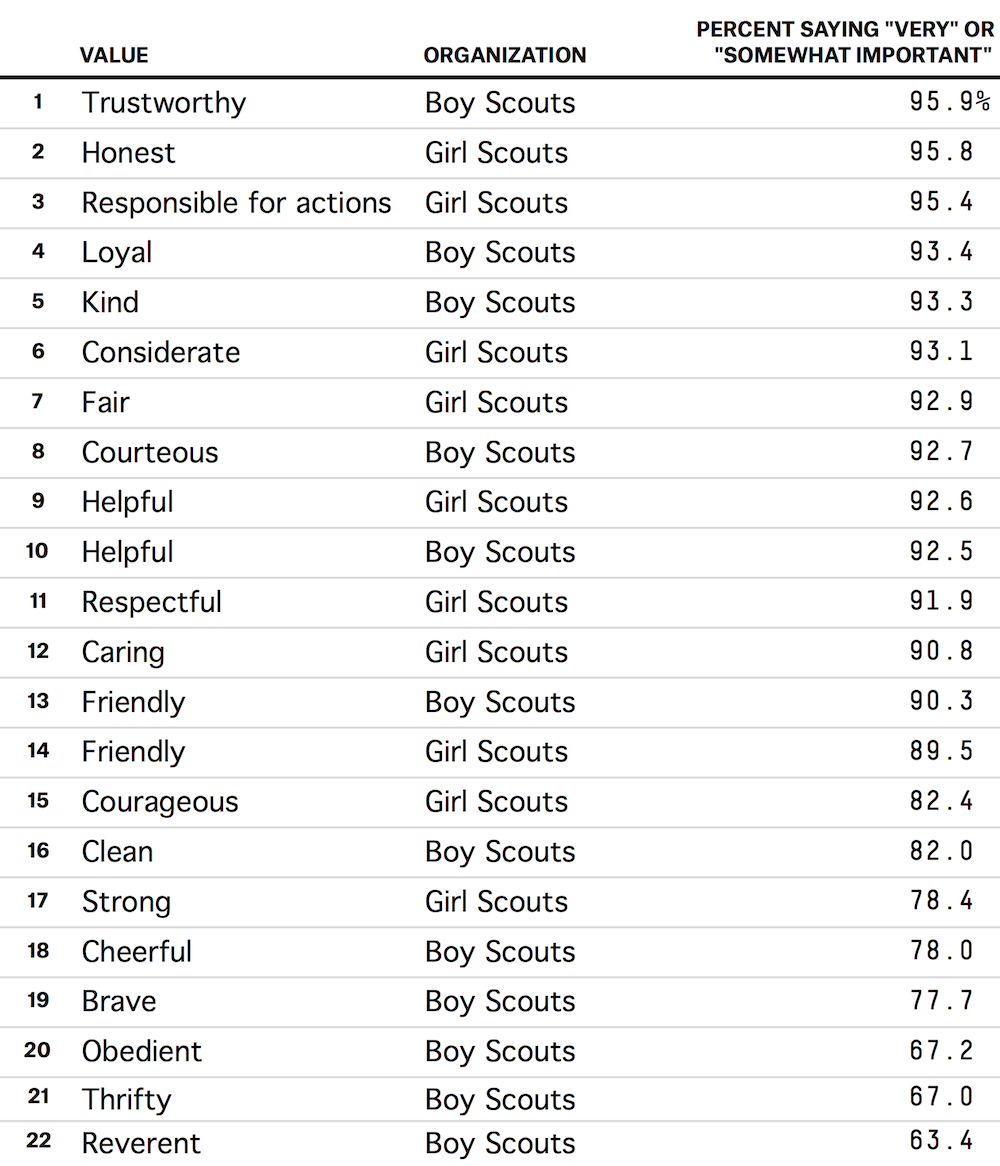 Trustworthiness and honesty occupy the top two spots, respectively. As we expected, the two values common to both groups — helpful and friendly — came out roughly even, which makes me think there wasn’t a significant group bias (that’s to say, people didn’t assign different levels of importance to the same value between the two organizations). This is backed up by the observation that when we break respondents down by gender, we don’t find anything particularly wonky; men don’t rate the Boy Scout values higher overall.

The bottom five in the list are Boy Scout values — cheerful, brave, obedient, thrifty and reverent — but still, all of these clear 60 percent of respondents calling them important. All of these are slightly more complex values as well; defining bravery is a bit trickier than defining trustworthiness, but the poor scores of these values brings the average importance of a Boy Scout value down.

We plan to post the full data set this week.

(Full disclosure: My family is pretty involved in scouting. My brother and I are Eagle Scouts, and my sister received the Girl Scouts’ equivalent, the Gold Award. I also worked for the Girl Scouts for a summer in college, moving cookies. It was a great gig.)