As they approach the playoffs, the Indiana Pacers and the Miami Heat should be worried about their recent slumps, but probably no more than if these rough patches had arrived earlier in the season.

In their last February game, the Pacers beat the Milwaukee Bucks — their third consecutive win — to improve to 44-13. They were a game and a half in front of Miami in the East, after the Heat’s sixth straight win that same night over the New York Knicks. Since then, Miami is 12-11, which is mediocre but better than Indiana’s weak 10-12 run, which the Pacers reached after beating the Bucks, again, Wednesday night. Indiana coach Frank Vogel had benched his starters, and his reserves pulled out a two-point win over the team with the worst record in the NBA.

Up next for Indiana and Miami: each other. They play Friday in a game that two months ago looked like a preview of the Eastern Conference finals. Now it must feel more like a reprieve, a chance to face a struggling opponent.

How far the East’s titans have fallen. But the historical record suggests that bad play in March and April, the last two months of the season, hurts teams’ playoff chances no more than earlier slumps do.

Using Basketball-Reference.com’s Play Index, I searched for playoff teams that played an 82-game schedule since 1983-84, when the postseason expanded to 16 teams. That left me with 446 teams. (That’s 16 teams for each of the 28 seasons with a full schedule, except for two teams last year — the Boston Celtics and the Pacers — that missed one game.)

But the timing of teams’ regular-season wins didn’t matter. There was no statistically significant relationship between a team’s winning percentage before March subtracted from its winning percentage in March and April, and how the team did in the playoffs (p>0.8).

In other words, while the slumps aren’t yet distant memories for Indiana and Miami fans, they’re no more damaging to the teams’ playoff hopes than if the slumps had occurred in the season’s first 22 or 23 games.

The basketball stats site Hickory-High.com similarly found no particular importance for the playoffs for a team’s March performance relative to its results the rest of the season.

This doesn’t mean the East leaders’ slumps are irrelevant. If either team had won more games, it would have a big lead for the top seed in the Eastern Conference playoffs and a better chance at home-court advantage in the finals.

Their late slumps also are unusual for teams as good as they are. Miami and Indiana have 53 and 54 wins, respectively, with a handful of games remaining. Just one playoff team in our sample with more than 50 wins had a losing record in March and April: the 54-win Detroit Pistons in 1996-97, who lost in the first round of the postseason. And just two teams with more than 50 wins were outscored in March and April. (Each one, the 2003-04 Sacramento Kings and the 2004-05 Seattle SuperSonics, won one playoff series.)

It’s also notable that Miami and Indiana have slumped differently. Miami has been unlucky, losing close games while otherwise winning by big margins: The Heat have outscored opponents by about four points per game in March and April, not far off their season mark of 5.45.

But Indiana has been lucky to win 10 of its last 22 games: The Pacers have been outscored by nearly five points per game, thanks to offensive woes outlined by my Grantland colleague Zach Lowe last week. That’s by far the biggest scoring deficit this late in the season for a 50-win playoff team in our sample. Perhaps the encouraging results of prior playoff teams don’t apply as far down the charts as Indiana has fallen.

The table below shows the 50-win teams in 82-game seasons with the worst winning percentages in March and April, and how they did in the regular season and the playoffs. 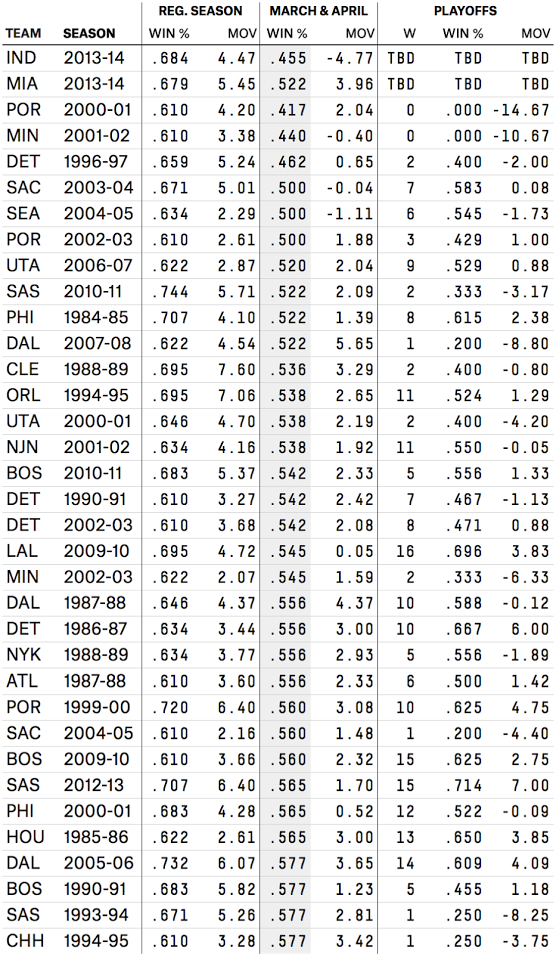