The University of South Alabama has a new poll out in the first state in the nation (alphabetically). John McCain leads Barack Obama by 24 and Hillary Clinton by 22. These numbers represent slight improvements for both Democrats since USA’s previous poll, but neither Democrat has a credible shot in Alabama.

Now, for today’s pop quiz … actually it’s not a pop quiz at all, since there’s no right or wrong answer — just a discussion question. Today, in Gallup’s daily primary tracker, Barack Obama holds his widest lead since the poll began, with a 10-point margin over Hillary Clinton. 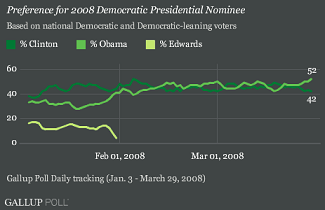 If you had to put money on it, would you guess that in next Sunday’s Gallup poll — that’s April 6th — Obama’s lead over Clinton will be more than 10 points, or less than 10 points?