In a new paper published* in The Forum, political scientists DeWayne Lucas and Iva Deutchman examine the electoral fate of members of the moderate Republican Main Street Partnership during the GOP’s era of House control in order to assess what the fate of current Blue Dog Coalition members might be. Cutting to the chase, what Lucas and Deutchman find is that moderates are much more embattled within their party’s majority caucus than when their party is in the House majority, and thus their ability to raise money and survive electorally declines.

But the experiences of RMSP members during the GOP House majority days are not necessarily perfectly generalizable to the situation facing Blue Dogs right now. When it comes to money, they write:

The financial story for the Blue Dog Democrats has some similarities but also some clear differences from the story of the Main Street Partnership. The comparison, however, is complicated by the fact that the two factions are at different points in their historical evolution. The partisan environment turned against the Main Street Partnership after Republicans had maintained their congressional majority for a number of terms. Because the Democrats are only one further term beyond their resumption of a congressional majority, it is hard to make an exact comparison. Nevertheless, the first congressional election after formation of the Blue Dogs, in 1996, can again be used as a baseline for exposition.

Rather than compare the Main Street Partnership (MSP) with the Blue Dog Coalition (BDC) in the same year of 1996, it occurs to me that it might be more analogous to look at the MSP in 1996 v. the BDC in 2008–respectively, the first cycles after the GOP gained the House majority and the Democrats captured it back. And more specifically, it seems we ought to be most interested in how MSP incumbents fared relative to non-MSPers, compared to how well BDC v. non-BDCers incumbents fared in fundraising, along with how both of these two subsets fared in open seat races. In Table 2 of their paper, Lucas & Deutchman provide the fundraising ratios for every cycle from 1994 through 2008; the table below pares their data down to just the aforementioned years and cases. (And yes, I used light blue and light red on purpose.) The cell entries represent the fundraising advantage relative to the challenger in that race, expressed as a ratio. To wit: 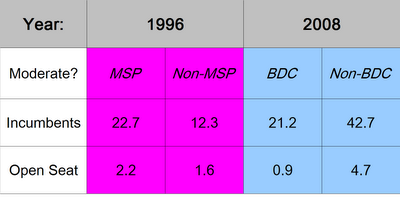 What we see here in the first row of data is that, of course, on average incumbents in both parties and no matter their ideological association with either the MSP or BDC had far more money than their respective challengers. But the centrist, MSP incumbents running in the first cycle after the Republican Revolution actually enjoyed a fundraising advantage twice that of their fellow Republicans who were not members of the MSP members did, whereas the reverse was true for Democrats–for in 2008 the non-Blue Dogs enjoyed an average fundraising ratio advantage twice that of their the fellow Democrats who were centrist Blue Dogs. Some of this difference is probably a result of the fact that more Democrats–particularly those in majority-minority districts–run unopposed, and so the ratios can be absurdly high in many cases. (N.B: I use the term “centrist” here as a descriptive shortcut even though some Blue Dogs may be less centrist than some non-Blue Dogs, and similar for MSPers and non-MSPers.)

The more interesting line of the chart involves open seats. Though there are fewer such contests each cycle, how well does money gravitate to centrists in each party compared to more ideologically purist candidates? As expected, the ratios are much smaller here because, in the absence of an incumbent, these tend to be much more more competitive seats into which both parties and their affiliated interest groups and supporters on both sides pour tons of money. Still, you don’t see much difference in the fundraising ratios for centrist and non-centrist Republicans who ran in open seat races in 1996, whereas you see far more disparity for Democrats, with centrist Blue Dogs struggling in 2008 compared to non-centrist. In fact, because the ratio is less than 1, Blue Dogs didn’t outraise their open seat opponents in 2008, whereas non-Blue Dog Democrats in open seats on average did very well, with a nearly 5:1 fundraising advantage on average.

Again, ceteris paribus, it’s more likely that an open Democratic seat is a lopsidedly Democratic seat because of racial gerrymandering. Still, if the data here are any indication, at first blush it would seem that liberal groups and funders are less supportive of moderate Democrats than conservative groups are of moderate Republicans. This also seems puzzling because you would expect that the money from big business, when it tends to spread across both parties, would end up in the pockets of moderate Democrats–whereas you wouldn’t expect the same from, say, unions going to moderate Republicans. Unfortunately, the paper does not detail the sources of the money–a subject that might make for a good follow-up paper.

*I should make one point of clarification/suggestion, and one disclosure. Suggestion: If not already familiar with The Forum, it is in my opinion one of the best online journals going, and one of several great ones published exclusively online by Berkeley Electronic Press. Disclosure: Although I was long since left Binghamton University, Dr. Lucas was a student of mine there during the single year I was a visiting professor there.)