A recent Roll Call piece by Steve Dennis (sorry, behind subscription firewall) examined the rising policy influence of Blue Dog Democrats within the Democratic House coalition on the issues of deficits and spending. Putting policy matters aside, what jumped out at me was a quote in the second half of the piece from somebody described as a “liberal strategist” by Dennis: “Last time I checked, the polling shows many of the Blue Dogs are poised to lose their seats. It will be tough for the Blue Dogs to drive the Democratic Caucus next year if they’re not in it.” (For the record, the unidentified strategist was not me.)

The question is not whether the strategist’s statement is true, but how true. Because as the two charts in this post demonstrate, whether or not they are actual members of the Blue Dog coalition or not, the Democrats whose seats are most in jeopardy this autumn almost uniformly come from the more conservative half of Speaker Nancy Pelosi’s House Democratic caucus. 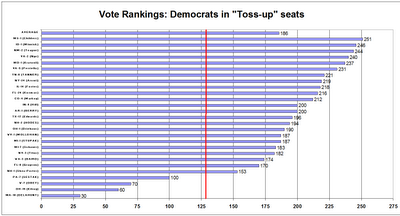 Let’s take a look at Democratic-held seats that may flip this November. Last week I used ratings by Isaac Wood of Sabato’s Crystal Ball for an online analysis and follow-up 538 post in which I examined where Republicans need to win regionally to recapture the House. To mix things up–but again in the spirit of using a second-hand source for the competitiveness ratings, rather than some index I might create–this time I turn to Cook Political Report’s David Wasserman. (Who, as it happens, was Wood’s predecessor at Crystal Ball.) In the June 12 issue of the National Journal (see p. 20), Wasserman ranked 64 Democratic-held seats as either “probable switch”, “toss-up”, or “also competitive.” I then looked up the National Journal’s vote rankings, published in their February 27, 2010 issue, for all 64 of these members.

For those who may be unfamiliar, a brief aside here to explain those rankings: NJ picks a series of roll call votes on economic, foreign policy and social issues, creates a score for each of these categories for every House and Senate member, also computes a composite score for all of these votes, and then ranks every member of the House from 1 to 435 in terms of how liberal [or conservative] their composite voting score is. The scores appearing in the two figures I created for this post represent the liberal ranking; in other words, a ranking of 100 means that member has the 100th most liberal composite voting score in the House in the 111th Congress (or thus far, at least). 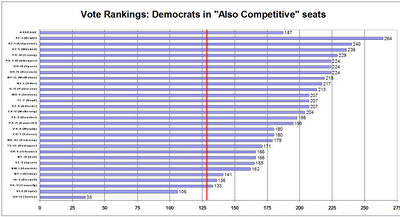 Given that there are 256 Democratic-held seats (or recently held, in the case of vacancies) as we head into the midterms–and despite the fact that at the very middle of the distribution there are a few super-centrist Democrats who actually have slightly more conservative voting records than a few super-centrist Republicans (but very few, a consequent of the continuing bifurcation of the Congress, especially the House, of the past two or three decades)–for simplicity’s sake I drew a line at ranking 128. Democrats with a ranking of 128 or lower are, we might say, in the more liberal half of the House Democratic caucus; those 129 or higher are in the more conservative half. That 128 cut point is indicated by the solid red line in each of the two figures.

And what do we see? Leaving aside the small group of dead-in-the-water “probable switch” seats,* the two figures reveal a rather astonishing, but virtually identical distribution of the voting records of House incumbents currently occupying what Wasserman ranks as either “toss-up” (27) or “also competitive” (29) seats. The mean ranking for both groups (186, 187) is basically the same–and this despite the slight weighing down of that average of a handful of liberal outliers among both groups, including four “toss-up” seats where the member has a vote rating lower than 128 and two such seats among the “also competitive” group. The pattern is clear: Some of the most conservative members of the House Democratic caucus, those with vote scores that rank them in the high 100s or low 200s of the 256-member caucus, are in trouble. Heck, Alabama’s Bobby Bright is actually the 264th most liberal member in a House that only has 256 Democratic-held seats!

What can we conclude from this data?

1. Blue Dogs or other House Democrats who often vote with them are going to account for the vast majority of House Democratic losses this November, which is not a real shocker to anyone following the situation closely;

2. The voting records of those in greater jeopardy (“toss-ups”) are not much different from those who are in somewhat lesser jeopardy (the “also-competitive” seat-holders). Of course, vulnerability is a function of factors other than roll call voting records, including money and strength of opponent and district demographics and seniority.

3. The House Democratic caucus, whether holding onto a thinner majority or falling into the minority, will be more liberal in the 112th Congress than it is now.

*Notes on the figures: 1. Those six “probables” Wasserman classified are, perhaps not surprisingly, all open seats: AR-2, IN-8, KS-3, LA-3, NY-29, and TN-6; 2. Incumbents with names in CAPS in the two figures are not running for re-election and so these are open also seats; 3. There are two “also competitive” seats for which there were not sufficient roll call data for their newly special-elected members to have a score, NY-23 (Owen) and PA-12 (Critz), which accounts for the fact that 6 + 27 + 29 = 62, not 64.