Former New York Mayor Michael Bloomberg spent more than $400 million on television commercials alone during his ultimately brief 2020 presidential campaign. He blanketed the airwaves across the nation, running ads in almost every single state. And in the end, which came on Wednesday when Bloomberg announced that he was exiting the race and endorsing former Vice President Joe Biden, all he had to show for it was a handful of delegates and a win in American Samoa.

So Bloomberg’s candidacy failed in getting him to the Oval Office — but he won in another way.

Bloomberg entered the race in late November. At that point, Sen. Elizabeth Warren was ascendant, and fears about Biden’s weaknesses were rampant. Bloomberg opposed many of Warren’s more liberal ideas, such as her wealth tax plan, and he viewed her as unlikely to defeat President Trump in a general election. He reportedly saw both her and Sen. Bernie Sanders as unacceptable general election nominees and doubted Biden or any of the other more establishment, moderate candidates in the race could beat them. So he got in.

But Bloomberg opted for an unorthodox strategy to win the Democratic nomination, skipping the first four contests — Iowa, New Hampshire, Nevada and South Carolina — while hoping his huge spending advantage would put him in a position to rack up delegates on Super Tuesday.

His strategy looked like it could work a few weeks ago. Sanders had jumped to the front of the queue instead of Warren, but the same fears about nominating too liberal a candidate applied to him. Bloomberg began amassing endorsements from more center-left figures in the party who opposed a Sanders nomination. Black voters started to move from Biden to Bloomberg. In short, Bloomberg looked like he could replace Biden as the candidate for older and more moderate Democratic voters and the party’s center-left elites. National polls showed Bloomberg climbing into a tie with Biden for second: 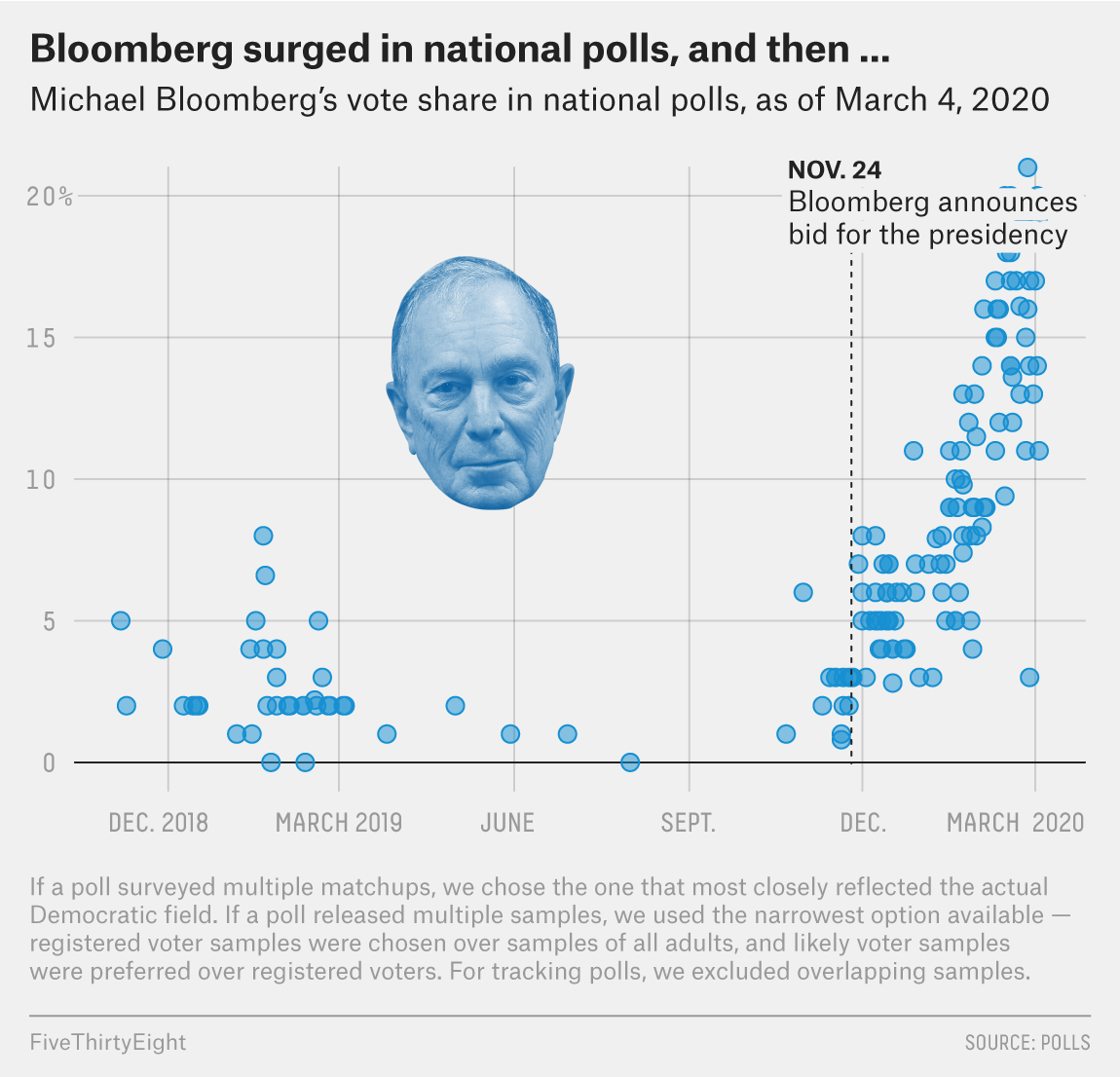 Then, Bloomberg’s plan fell apart. In fact, it fell apart so fast that national polls really didn’t have enough time to capture it. First, his surge in the polls resulted in the news media and the other candidates, particularly Warren, hammering him in the debates and on the trail, particularly about accusations that he has made sexist comments in the past. His performance in his first debate, in Las Vegas, was almost universally panned. It’s not clear that Bloomberg could have recovered from any of that — we didn’t get a ton of polling between that Nevada debate and South Carolina. But the real end of the former mayor’s candidacy came when Biden won overwhelmingly in South Carolina, got a surge of endorsements and then did well on Super Tuesday. The center-left, establishment wing of the party no longer needed a Biden replacement — they had Biden.

So with Biden now back as the most likely Democratic nominee, it did not make much sense for Bloomberg to keep running.

But I don’t think Bloomberg’s candidacy was a mistake or unwise. He’s worth more than $50 billion — so it’s not clear the $400 million he spent on television commercials or the other money he poured into his campaign matters much to him. He got to go on stage in the debates and attack Sanders and Warren. We don’t know if that boosted Biden, but it likely didn’t hurt him. With Biden now in a much stronger position than when Bloomberg entered the race, you could argue that Bloomberg provided what he and other more center-left figures wanted — to steer the race towards a more moderate nominee. The more extreme back-up plan — nominate Bloomberg — ended up not being needed. My guess is that Bloomberg would have preferred to be the candidate instead of Biden but knew that was a fairly unlikely outcome, since he is a one-time Republican who entered the race in late November.

So Bloomberg, who has flirted with running for president since 2008, can now go back to his previous political role: pumping his billions into a variety of liberal causes. He hired people in numerous states for his presidential campaign, and his employees were reportedly told that they would have jobs through November. It’s not clear if Bloomberg will end up retaining these staffers for some kind of operation to boost Biden against Sanders and Warren in the primary, have his team start focusing now on the general election against Trump or simply wind down his apparatus. But I expect him to stay out of the primary and focus on Trump.

In short, Bloomberg may end up spending more than $1 billion in 2020 to get Trump out of the Oval Office — and from Bloomberg’s view, spending about half of that money to replace Trump with Michael Bloomberg was probably a failed investment that was well worth the risk.